The Books of Samuel (Hebrew: ספר שמואל—Sefer Sh'muel) , are part of the Hebrew Bible), or Old Testament. They deal with beginnings of the Hebrew kingdoms of Israel and Judah in the eleventh century, B.C.E.. The main characters in the story are Samuel, Saul, David, and God. The plot traces Samuel's birth and ministry as Israel's last and greatest judge, the anointing and rise of Saul as Israel's first king, the rejection of Saul by God and Samuel, the rise of David, the struggle between Saul and David, the consolidation of David's kingdom after Saul's death, and various intrigues and rebellions within David's realm.

The Books of Samuel originally formed a single text, which probably continued through the first chapters of the current Books of Kings. Due to limitations in the lengths of texts that could be contained in a single scroll, however, they had to be divided. The translators who created the Greek Septuagint version of the Bible divided the text of Samuel and Kings into four books, which they named the Books of the Kingdoms. In the Latin Vulgate version, this was rendered as the Books of the Kings. Thus, the books known today as 1 and 2 Samuel were 1 and 2 Kings, while today's Books of Kings were called 3 and 4 Kings. The modern English designations of Samuel and Kings began with the King James Bible.

While the traditional authorship of the Books of Samuel is ascribed primarily to Samuel himself modern scholarship generally believes that several later sources, some with contradictory views of events, were combined into the books as we have them today. The contents of the books

The two books can be essentially broken down into five parts:

The story weaves the sagas of three separate leaders together, and there is evidence of several sources at work even in telling. For example, the story of Saul's emergence as king is told in three different versions. [1] In addition to combining the stories of Samuel, Saul, and David, the sources display their own theological viewpoints, some strongly opposed to the institution of kingship, others favoring it as a divinely ordained office.

The conclusion of the story begun in the Books of Samuel actually appears in 1 Kings 1-2, dealing with David's old age, the rebellion of Adonijah, Solomon's enthronement, and his enacting a final revenge against David's perceived enemies. The time period and general subject matter of the Book(s) of Samuel is also covered by the narrative in the Books of Chronicles. However this material is less detailed, and many of the stories embarrassing to David, such as the account of his affair with Bathsheba, the civil war with Ish-bosheth, and the rebellion of Absalom, are omitted in that account. 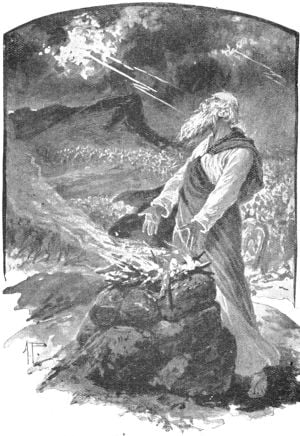 Samuel calls upon God at Mizpah.

The rise of Saul 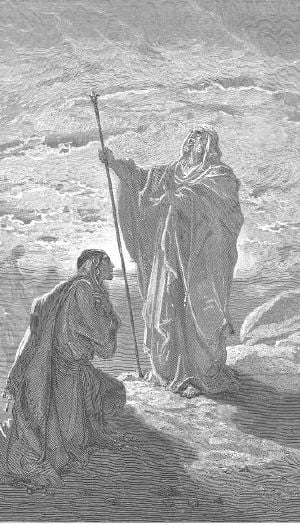 Samuel blesses Saul at the high place near Zuph. 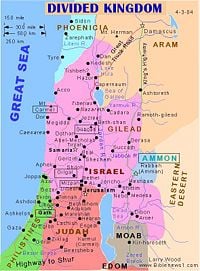 Map of Israel and Judah, with Mizpah, Gilgal, Gath, and Carmel highlighted. Click to enlarge.

The emergence of David

The end of Saul 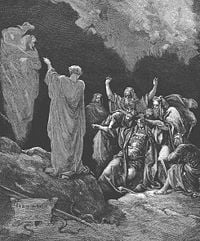 The medium of Endor contacts the spirit of Samuel, who predicts Saul's doom. 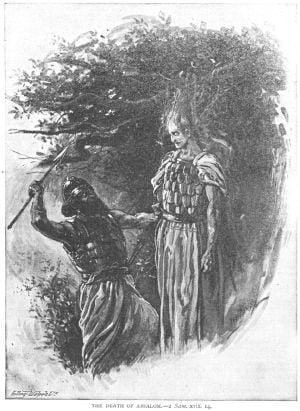 The narrative is taken up again at the beginning of the Books of Kings, after the insertion of the material in the following "appendix."

The remainder of the second Book of Samuel consists of material that does not fit into the sequence of the above narrative. It is therefore considered as an appendix of related material inserted in the the scroll of 2 Samuel by later editors. 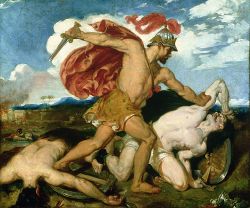 Benaiah, one of the Mighty Men.

However, this theory is not supported by most modern scholars, who consider that the text is clearly not contemporary with the events described. The sources that modern scholarship considers to have been interlaced to construct 1 & 2 Samuel are:

The relationship between these sources is uncertain, though it is generally agreed that many of the various shorter sources were embedded into the larger ones before these were in turn redacted together. Based on the documentary hypothesis, some—most recently Richard Elliott Friedman—have proposed that the sources were originally parts of the same texts as the Elohist, Yahwist, and possibly Priestly sources of the Torah. The priestly source, for example, is thought to correlate to the Republican Source, while the Yahwist source correlates to Court History of David. Many scholars believe the Deuteronomist, or those associated with him, is the one who redacted together these sources into the Books of Samuel.

A suggested assignment of the verses to these sources, in their supposed historical order, is: