An Eslite Bookstore in Taiwan.

Bookselling is the commercial trading of books, the retail and distribution end of the publishing process. People who engage in bookselling are called booksellers or bookmen.

Books were traditionally brought to customers through several distinct business entities such as the publishers, printers, binderies, whole sellers, and retailers (bookstores). Separately published book reviews such as New York Times Book Review and Booklist affect the sales of the book and critics play an important role. The development of electronic commerce such as online bookstores and print-on-demand publishing are gradually changing this traditional book publishing model. Customers can post their reviews and ratings on the bookseller's website and their ratings directly affect book sales. Unknown authors, who had no chance of their books being displayed at bookstores shelves, also can publish their works by print-on-demand publishers and sell their books through online bookstores such as Amazon.com.

Did you know?
The earliest booksellers were scribes who copied books as they were demanded

In the book of Jeremiah the prophet is represented as dictating to Baruch the scribe, who described the mode in which his book was written. These scribes were the earliest booksellers who supplied copies as they were demanded.

Aristotle possessed a somewhat extensive library, and Plato is recorded to have paid the large sum of one hundred minae for three small treatises of Philolaus the Pythagorean. When the Alexandria library was founded about 300 B.C.E., various expedients were used for the purpose of procuring books, and this appears to have stimulated the energies of the Athenian booksellers. In Rome, toward the end of the republic, it became the fashion to have a library as part of the household furniture. Roman booksellers carried on a flourishing trade. Their shops (taberna librarii) were chiefly in the Argiletum, and in the Vicus Sandalarius. On the door, or on the side posts, was a list of the books on sale; and Martial, who mentions this also, says that a copy of his First Book of Epigrams might be purchased for five denarii or so. In the time of Augustus the great booksellers were the Sosii.

The high degree of learning and scholarship in the medieval Islamic world, particularly during the Abbasid Caliphate in the east and Caliphate of Córdoba in the west, encouraged the development of bookshops, copyists, and book dealers across the entire Muslim world, in Islamic cities such as Damascus, Baghdad, and Córdoba.

The spread of Christianity naturally created a great demand for copies of the Gospels and other sacred books, and later on for missals and other devotional volumes for both church and private use. Prior to the Reformation, the text writers or stationers, who sold copies of the books then in use, were formed into a guild. Some of these stationers had stations built against the very walls of the cathedral itself, in the same manner as they are still to be found in some of the older continental cities.

The religious dissensions of the continent, and the Reformation in England under Henry VIII and Edward VI, created a great demand for books; but in England neither Tudor nor Stuart could tolerate a free press, and various efforts were made to curb it. The first patent for the office of king's printer was granted to Thomas Berthelet by Henry VIII in 1529, but only such books as were first licensed were to be printed. At that time even the purchase or possession of an unlicensed book was a punishable offense. In 1556 the Company of Stationers was incorporated, and very extensive powers were granted in order that obnoxious books might be repressed. In the following reigns the Star Chamber exercised a rather effectual censorship; but, in spite of all precaution, such was the demand for books of a polemical nature, that many were printed abroad and surreptitiously introduced into England. Queen Elizabeth interfered little with books except when they emanated from Roman Catholics, or touched upon her royal prerogatives; and towards the end of her reign, and during that of her successor, James, bookselling flourished. So much had bookselling increased during the Protectorate that, in 1658, was published A Catalogue of the most Vendible Books in England by W. London. A bad time immediately followed. Although there were provincial booksellers the center of the trade was St. Paul's Churchyard. When the Great Fire of London began in 1666 the booksellers put their most of their stock in the vaults of the church, where it was destroyed. The Restoration also restored the office of Licenser of the Press, which continued till 1694.

In the first English Copyright Act (1709), which specially relates to booksellers, it is enacted that, if any person shall think the published price of a book unreasonably high, he may make a complaint to the Archbishop of Canterbury, and to certain other persons named, who shall examine his complaint, and if well founded reduce the price; and any bookseller charging more than the price so fixed shall be fined £5 for every copy sold. Apparently this enactment remained a dead letter.

Bookselling in the United States

The Spanish settlements drew away from the old country much of its enterprise and best talent, and the presses of Mexico and other cities teemed with publications mostly of a religious character, but many others, especially linguistic and historical, were also published. Bookselling in the United States was of a somewhat later growth, although printing was introduced into Boston as early as 1676, Philadelphia in 1685, and New York in 1693. Benjamin Franklin had served to make the trade illustrious, yet few persons were engaged in it at the beginning of the nineteenth century. Books chiefly for scholars and libraries were imported from Europe; but after a few years printing-presses multiplied rapidly, and with the spread of newspapers and education there also arose a demand for books. The works of Walter Scott, Lord Byron, Thomas Moore, Robert Southey, William Wordsworth, and indeed of every author of note, were reprinted without the smallest payment to author or proprietor. Half the names of the authors in the so-called "American" catalogue of books printed between 1820 and 1852 were British. By this means the works of the best authors were brought to the doors of all classes in the cheapest variety of forms. After the Civil War, because of the high price of labour and the restrictive duties laid on in order to protect native industry, coupled with the frequent intercourse with England, a great change took place, and American publishers and booksellers made liberal offers for new publications. Boston, New York and Philadelphia still retained their old supremacy as bookselling centers. Meanwhile, the distinct publishing business also grew, until gradually the conditions of business became assimilated to those of Europe. 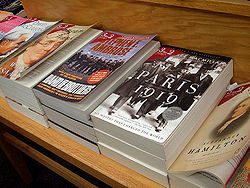 Books on a table in a bookstore

The modern system of bookselling dates from soon after the introduction of printing. The earliest printers were also editors and booksellers. 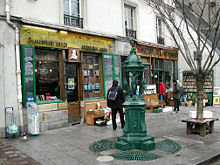 Shakespeare and Company bookstore in Paris

For later times it was necessary to make a gradual distinction between booksellers, whose trade consists in selling books, either by retail or wholesale, and publishers, whose business involves the production of the books from the author's manuscripts, and who are the intermediaries between author and bookseller, just as the booksellers (in the restricted sense) are intermediaries between the author and publisher and the public. The convenience of this distinction is not impaired by the fact either that a publisher is also a wholesale bookseller, or that a still more recent development in publishing started a reaction to some extent in the way of amalgamating the two functions. Coming between the publisher and the retail bookseller is the important distributing agency of the wholesale bookseller.

During the nineteenth century it remained the fact that the distinction between publisher and bookseller—literary promoter and shopkeeper—became fundamental. The booksellers, as such, were engaged either in wholesale bookselling, or in the retail, the old or second-hand, and the periodical trades.

Bookstores often sell other printed matter besides books, such as newspapers and maps; additional product lines may vary enormously, particularly among independent bookstores. Colleges and universities often have their own student bookstore on campus that focuses on providing course textbooks and scholarly books, although some on-campus bookstores are owned by large chains such as Waterstone's in the United Kingdom, or Barnes & Noble College Booksellers in the United States.

Online bookstores such as Amazon.com have become popular since the late 1990s. Those online bookstores maintain various features that help users select books. Their websites are interactive and far more advanced than online library catalogs. Some notable features are:

Users can post their reviews with a rating and those customer reviews became important book selection guide for new buyers. Readers can also post their opinions about the book and feel participating in the assessment of books.

The website traces and analyzes user's every step of search, and presents similar books of interests.

See inside of the book

Customers can see the inside of some of the books listed. They can see the table of contents, book covers, indexes, and some pages.

Online bookstores such as Amazon.com changed its business model from traditional bookstore to online shopping mall by expanding the products from books to all other kinds of items such as DVDs, music CDs, computer software, video games, electronics, apparel, furniture, food, toys, and others. They also provide a platform for individuals to sell used books and other items. Online bookstores are exploring various possibilities by using a unique advantage of online store.

Due to the development of electronic publishing, some online bookstores started selling e-books. An e-book (for electronic book, ebook, or ecobook) is the digital media equivalent of a conventional printed book. Such documents are usually read on personal computers, or on dedicated hardware devices known as e-book readers or e-book devices. While the most e-books are also available in print, some are available in the e-book format alone.