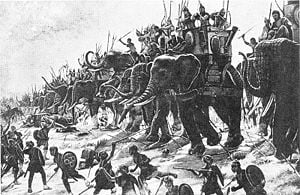 3 Maccabees describes how the Jews of Alexandria were rescued by God from being trampled by 500 rampaging war elephants.

The book of 3 Maccabees is found in most Orthodox Bibles as a part of the deuterocanonical books, but Protestants, Catholics, and Jews regard it as apocryphal. It tells the story of the persecution of the Jews of Alexandria and Egypt under Ptolemy IV Philopator (222-205 B.C.E.).

Despite its title, the book has almost nothing to do with the Maccabees or their revolt against the Greek Empire, as described in 1 Maccabees and 2 Maccabees. However, it shares with the other Maccabean books a concern with issues such as the struggle of the Jews against a Gentile ruler who attempts to force them to accept Greek traditions, and it appears to borrow from 2 Maccabees the theme of a miraculous intervention preventing a Gentile king from entering the Temple of Jerusalem. Unlike the other "Maccabean" works, however, most of the book takes place in Africa. It also concludes with a spectacular miraculous intervention by God to save his people from mass martyrdom by causing the Greek ruler to change his attitude, while in 1 and 2 Maccabees, deliverance comes through God's support of the Maccabean military revolt against Greek rule. The other books of Maccabees, unlike this work, also devote considerable attention to cases in which the Jews who are being persecuted are not delivered, but die as martyrs.

After the establishment of the Second Temple, Jews often received the protection of Gentile rulers, who saw the Jewish religion as a force for law and order. Cyrus the Great of Persia had allowed and supported the Jews of Babylon to return to Jerusalem and rebuild the Temple, and his Persian successors continued to support this project, giving authority to the Jewish high priest to administer Jewish law under Persian sovereignty. 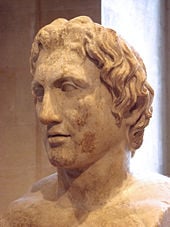 The Greek conqueror Alexander the Great followed a similar policy, and so, for the most part, did his successors. However, these rulers divided his empire into smaller domains and often fought among themselves for larger shares of it. During the time of the Maccabees in the second century B.C.E., a crisis emerged. Many Jews adopted certain Greek customs, while others insisted on a strict obedience to Jewish law and forbade accommodation with Gentiles. Some Greek rulers came to see the Jewish religion as an obstacle to peace and unity, and felt insulted by Jewish attitudes which saw Gentiles such as themselves as unclean and unfit to enter the sacred sanctuary of the Temple of Jerusalem. Both in Judea and in Africa, Jews sometimes experienced serious persecution for their faith.

It is in this context that the author of 3 Maccabees sets his story. The book is perhaps best understood not so much as a literal history of events, but a polemic against the cruelty of Greek and later Roman rulers who pressured Jews to adopt Gentile ways. At the same time, it is also argues against any compromise with Hellenistic culture, holding not only that God will deliver pious Jews, but that those who give in the Gentiles deserve to be put to death. 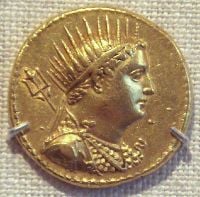 Ptolemy IV of Egypt, the villain of 3 Maccabees

The contents of the book have a legendary character, which scholars have not been able to tie to proven historical events, and it has all the appearances of a romance. It begins by describing how, after Ptolemy IV's defeat of Antiochus III in 217 B.C.E. at the battle of Raphia, he visited Jerusalem and the Second Temple. He insists on entering the Temple of Jerusalem, which is forbidden to Gentiles, but is struck down by God's power in answer to the prayers of the horrified Jews. On his return to Egypt he takes revenge on the Alexandrian Jews, depriving the civic rights of any who refuse to worship the Greek god Dionysus. Exasperated by their loyalty to their religion, he then orders all the Jews in Egypt to be imprisoned in the hippodrome of Alexandria. Clerks begin to prepare a list of the prisoners' names, but after 40 days of constant toil they end up exhausting their writing materials.

Ptolemy then commands that 500 elephants should be intoxicated and let loose on the Jews in order to trample them to death. However, the king oversleeps and fails to give the final order needed for this to occur. The next day he miraculously forgets all about the supposed disloyalty of the Jews and grows angry with his counselors who plan to kill them. The same evening, however, he reiterates to his bewildered staff his order that the Jews be killed. His commands are then executed.

The Jews pray to the Lord for mercy, and two angels appear from heaven. The elephants then turn on the royal troops and trample them instead of the Jews. Ptolemy blames his counselors for the entire affair, liberates the Jews, and feasts with them for seven days. The Jews institute a yearly festival to celebrate the events, and provincial governors are enjoined to take the Jews under their protection.

The king then authorizes the Jews to kill any of their kinsmen who had deserted the faith by cooperating with the former royal decree to worship a pagan deity.

Critics agree that the author of this book was an Alexandrian Jew who wrote in Greek. Together with 1 and 2 Maccabees, it was included in the Septuagint, the Greek translation of the Hebrew Bible completed by the Jews of Alexandria in the fist century B.C.E. However, rabbinical authorities of the late first and early second century C.E. rejected the Septuagint, thus excluding these works.

In style, the author is prone to rhetorical constructs and a somewhat bombastic style, and the themes of the book are very similar to those of the pseudepigraphal Epistle of Aristeas. The work begins somewhat abruptly, leading many to think that it is actually a fragment of a (now-lost) longer work.

Although some parts of the story are clearly fictional, other parts cannot be definitively proven or disproven. Some scholars are willing to accept the first section—which tells of the actions of Ptolemy Philopator in being kept out of the Temple of Jerusalem and later persecuting the Alexandrian Jews—as having a historical basis. Josephus notes that many Jews were put to death in Alexandria under the reign of Ptolemy VIII Physcon (146-117 B.C.E.) due to their support for Cleopatra II, and this execution was indeed carried out by intoxicated elephants. Some believe that the author of 3 Maccabees has transferred this historical incident to an earlier time period and added a fictitious connection to Jerusalem.

Another theory about the historical basis of the book holds that it describes the persecution of the Jews in the Fayum region of Egypt. It is known that these Jews abruptly changed allegiance from Egypt to Syria in 200 B.C.E., and this change may have been due to persecution by an athority such as Ptolemy IV. Yet another theory holds that the book represents a polemic against the persecution of Jews by the Roman emperor Caligula, thus dating it to around 40 C.E., but this theory has been rejected by more recent authors, on the grounds that in the book, Ptolemy does not claim divine honors as Caligula did.

The book was written at some point after 2 Maccabees, on which 3 Maccabees apparently relies. This sets the earliest date of composition to the end of the first century B.C.E.