The Epistle of James is a book in the Christian New Testament. The author identifies himself as James, traditionally understood as James the Just, the brother of Jesus, the first Bishop of Jerusalem. Framed within an overall theme of patient perseverance during trials and temptations, the text condemns various sins and calls on Christians to be patient while awaiting the imminent Second Coming.

Opinions are divided both as to its authorship—whether by James the Just, another disciple named James, or a later writer who was not a direct disciple of Jesus. Its date has been estimated as early as 45 C.E. and as late as the mid-second century.

The epistle takes a more "Jewish" attitude toward salvation than some other Christian works, especially the letters of Paul. It insists that the essence of religion is not found in what one believes, but what one does. It is most famous for its teachings on salvation, which declare that "faith without works is dead." Because it appears to contradict the doctrine of the Apostle Paul—that salvation comes by faith and not works—the epistle has caused considerable controversy. However, today it is accepted by all major denominations as canonical.

The epistle begins with a salutation addressed from James to "the twelve tribes scattered among the nations." (1:1) It encourages the church to maintain its faith in wisdom through various trials. (1:2-8) Whether rich or poor, true Christians persevere in humility (1:9-11). "Blessed is the man who perseveres under trial, because... he will receive the crown of life that God has promised to those who love him." Temptation does not come from God, but from one's own evil inclination, which gives birth to sin, and ultimately to death (1:12-18). Christians should be "quick to listen, slow to speak, and slow to become angry." They must not only be hearers of God's word, but also doers of it. True religion is defined as: "to look after orphans and widows in their distress and to keep oneself from being polluted by the world." (1:19-27)

Believers in Jesus Christ must not show favoritism, especially to the rich, for is it not the rich who are persecuting the church and slandering the name of Jesus? "Love your neighbor as yourself" is the "royal law" of the scriptures and a solid guideline for those who wish to do right. Moreover, "judgment without mercy will be shown to anyone who has not been merciful." (2:1-13) 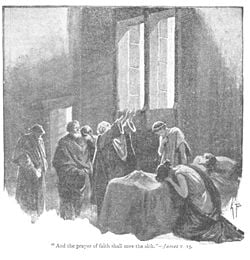 Prayer over the sick

The epistle's most famous passage is found in 2:14-26, in which the author asks: "What good is it... if a man claims to have faith but has no works?" He declares that "faith without works is dead." James cites several examples used by Paul, but draws an opposite conclusion, namely that "a man is justified by works" and not simply by faith.

The author strongly warns against the dangers of speaking in anger, for "the tongue is a fire." (3:1-12) True heavenly wisdom is found in humility, for "peacemakers who sow in peace raise a harvest of righteousness." (3:13-18)

A true Christian is not a "friend to the world" but resists sin. At the same time, one should not slander one's brother or judge one's neighbor. (4:1-12) Nor should one boast about one's plans or accomplishments, but rely in all humility on God (4:13-17). Those who hoard their wealth will regret their actions in the Last Days (5:1-6).

Christians must be patient and await the coming of Jesus. They must avoid grumbling and complaining against one another. The author gives a strict admonition against swearing oaths. He calls the church to a pray for the sick, instructing that if one is ill, "the elders of the church (should) pray over him and anoint him with oil in the name of the Lord." Finally he urges an effort to retrieve those members who have strayed from the truth, for, "whoever turns a sinner from the error of his way will save him from death and cover over a multitude of sins." (5:7-20) 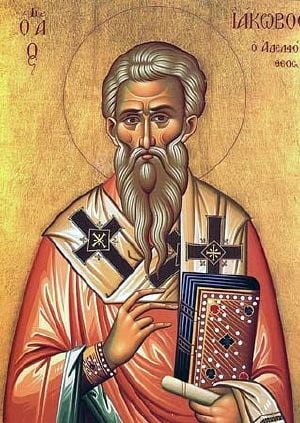 The author identifies himself in the opening verse as "James, a servant of God and of the Lord Jesus Christ." The name "James" is an anglicized form of the Hebrew and Greek name Jacob. From the middle of the third century, patristic authors cited the epistle as written by James the Just, a relation of Jesus and first Bishop of Jerusalem.[1] This James is considered the physical (younger) brother of Jesus by many Protestants, but not by Catholics, who insist that Jesus had no younger siblings. Some admit that he may have been Jesus' older half-brother by another mother who died, leaving Joseph a widow before he married Mary. Not numbered among the Twelve Apostles, James was nonetheless a very important figure. Paul identified him as "the brother of the Lord" in Galatians 1:19 and as one of the three "pillars" in 2:9, along with Peter and John. He is traditionally considered the first of the Seventy Disciples.

John Calvin and others suggested that the author was the Apostle James, son of Alphaeus, also called James the Less, one of the 12 apostles. Authorship has also been attributed to the apostle James the Great, brother of John the Evangelist and son of Zebedee.

If written by James the Just, the place and time of the writing of the epistle would be Jerusalem, where James was residing before his martyrdom in 62 C.E. The letter speaks of persecutions in the present tense (2:6), and this is consistent with the persecution in Jerusalem (Acts 12:1). However, some challenge an early date on the basis of some of the letter’s content, which they interpret to be a clarification of St. Paul’s teachings on justification found in his Epistle to the Romans and elsewhere.

If written by James the brother of John, the location would have also been Jerusalem, sometime before 45, when this James was reportedly martyred. The Catholic Encyclopedia accepts James the Just as the author and dates the writing of the epistle between 47 C.E. and 52 C.E. However, many critical scholars consider the epistle to be written in the late first or early second centuries, after the death of James the Just.[2] Reasons cited for the rejection of an early date and James' authorship include:

Martin Luther once called James "an epistle of straw."

The Epistle of James was included among the 27 New Testament books first listed by Athanasius of Alexandria and was confirmed as a canonical epistle of the New Testament by a series of councils in the fourth century. Today, virtually all denominations of Christianity consider this book to be a canonical scripture.

In the first centuries of the church, the authenticity of the epistle was doubted by some Church Fathers, including for example by Theodore, Bishop of Mopsuestia in Cilicia. It is missing in the Muratorian fragment—the earliest known list of canonical scriptures—as well as several other early lists. The church historian Eusebius of Caesaria classes it among the contested writings (Historia ecclesiae, 3.25; 2.23). St. Jerome gives a similar appraisal but adds that by his day it had been universally admitted.

Its late recognition in the church, especially in the West, may be explained by the fact that it was apparently written for Jewish Christians, and therefore not widely circulated among the Gentile churches. There is some indication that a few groups distrusted the book because of its doctrine, which famously emphasized that faith alone is inadequate for salvation, but must be accompanied by good works.

In Reformation times some theologians, most notably Martin Luther, questioned the epistle's inclusion in the Bible. However, both the Lutheran Church and every other major denomination today accepts the Epistle of James as legitimate holy scripture.

The Epistle of James' main historical importance has been with regard to the issue of justification—are people saved primarily by faith in Jesus, or must they also manifest a good works and moral character? James' insistence that "faith without works is dead" has been cited in numerous Christian theological debates, especially against the Protestant doctrine of justification by faith alone. 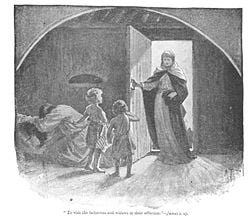 According to James, true religion is "to look after orphans and widows in their distress and to keep oneself from being polluted by the world." (James 1:27)

James' teachings on the need for works as well as faith appears consciously intended to correct some interpretations of the teachings of Paul of Tarsus, especially those of the Epistle to the Romans (see Romans 3:28), which emphasized that "man is justified by faith," rather than by works or obedience to the Jewish ceremonial law. However, Paul himself had to contend with Christians who believed that their "freedom" in Christ entitled them to ignore the commandments against adultery, fornication, and attending pagan altars (e.g. 1 Cor. 5:1-13, 1 Thess 4:3-5). It may be that James intended only to correct such attitudes rather than to contradict Paul's basic teaching. In any case, the attitude expressed in James stands as a reminder that passages in the New Testament often balance one another and should not be taken out of context to support one view without due consideration of the opinions of other biblical writers, or even of the same writer in a different context.

The controversy over faith versus works often overshadows the other important contributions of the Epistle of James. For example, it is the one New Testament writing to give a definition of religion acceptable to God: "to look after orphans and widows in their distress and to keep oneself from being polluted by the world." (1:27) Like Jesus himself, it emphasizes the importance of not only hearing, but doing: "If you really keep the royal law found in Scripture, 'Love your neighbor as yourself,' you are doing right." (2:8) It also emphasizes the need to refrain from speaking in anger, holding the tongue to be a primary source of evil: "The tongue also is a fire, a world of evil among the parts of the body." (3:6) James' epistle is also the chief biblical text for the practice of the anointing of the sick and praying over them: "Are any among you sick? They should call for the elders of the church and have them pray over them, anointing them with oil in the name of the Lord (5:14).

Far from being "an epistle of straw," as Luther once suggested, the Epistle of James is one of the most significant of the New Testament's shorter books.