4 Maccabees uses the story of the Maccabean martyrs to make an essentially stoic philosophical point.

The book of 4 Maccabees is a homily or philosophic discourse praising the supremacy of pious reason over passion. Among churches other than the Orthodox Church, it has always been regarded as apocryphal. It was also excluded from the Jewish scriptural canon.

The book takes up the story of the Maccabean martyrs told in 2 Maccabees as its primary example in proving that clear, reasonable thinking about true virtue is the key to overcoming every temptation. Though clearly the work of a pious Jew, its attitude shows strong influence from stoic philosophy.

While once accepted as a deuterocanonical book by the Orthodox, 4 Macabees is increasingly relegated to an appendix of apocryphal works, one of the pseudepigrapha. The reasons for this include its inclusion of pagan thought and the differences between its version of the dialog of the Maccabean martyrs and that of the similar dialog found in 2 Maccabees.

The work consists of a prologue and two main sections. The first main section advances the philosophical thesis that "right thinking" alone can control temptation, while the second illustrates this idea using examples drawn from 2 Maccabees, principally, the martyrdom of the priest Eleazar followed by that of the seven pious bothers and their mother under Antiochus IV Epiphanes.

The author makes plain from the outset that his primary purpose lies in the realm of philosophy: "The subject that I am about to discuss is most philosophical," he states, "that is, whether devout reason is sovereign over the emotions." He goes on to argue that "rational judgment is sovereign over the emotions by virtue of the restraining power of self-control." Reason, he insists is what enables Jews to resist temptations like eating non-kosher food, as well as overcoming such classic vices as anger, greed, gluttony, and lust (ch. 1).

The "temperate mind" guided the great Jewish leaders like Jacob, Moses, and King David at their best (2-3). However, the story of the Maccabean martyrs presents a clear and more immediate example of this principle.

Eleazar, the brothers, and their mother

The author then summarizes the rise of the tyranny of Antiochus IV and describes his torture of the pious priest Eleazar, whom the author presents as the perfect stoic sage: "You scoff at our philosophy as though living by it were irrational, but it teaches us self-control, so that we master all pleasures and desires, and it also trains us in courage, so that we endure any suffering willingly" (4:22-23).

The issue is whether or not Eleazar will obey the king by agreeing to eat the flesh of a pig in violation of Jewish law. Eleazar, of course, refuses. He is then cruelly tortured until he finally dies, but not before crying out: "It would be irrational if we, who have lived in accordance with truth to old age and have maintained in accordance with law the reputation of such a life, should now change our course… Therefore, O children of Abraham, die nobly for your religion" (6:17-22). The author then proceeds to a reflection on the philosophical implications of Eleazar's actions.

Antiochus next orders that seven brothers who have resisted the order to eat pig flesh be brought in and put to the test. The first boldly resists, citing Eleazar's example: "I will convince you that sons of the Hebrews alone are invincible where virtue is concerned," he declares (9:18). Tortured nearly to the point of death, he does not relent. "Imitate me, O brethren, nor ever desert your station, nor abjure my brotherhood in courage: Fight the holy and honorable fight of religion" (4 Mac 9:23). The next brother follows his example: "How sweet is every form of death for the religion of our fathers! …I lighten my suffering by the pleasures which are connected with virtue" (9:29-32).

The rest of the brothers follow, one by one, until the last brother is brought out. Still a boy, he, too, shows that he is a true philosopher, even though young. "Surely they by dying nobly fulfilled their service to God," he declares to the king, "but you will wail bitterly for having slain without cause the contestants for virtue" (12:14). The author then digresses to consider the meaning of these deaths, concluding that, "Since the seven brothers despised sufferings even unto death, everyone must concede that devout reason is sovereign over the emotions" (13:1).

Finally, it is the mother's turn, and she, too, willingly dies rather than violate her principles, for which the writer greatly praises her. But more than the mother herself, he praises reason, arguing that "devout reason, giving her heart a man's courage in the very midst of her emotions, strengthened her to disregard her temporal love for her children" (15:23).

The author concludes that Antiochus IV was so moved by the demeanor of these martyrs that "when he saw the courage of their virtue and their endurance under the tortures, (he) proclaimed them to his soldiers as an example for their own endurance, and this made them brave and courageous for infantry battle and siege, and he ravaged and conquered all his enemies" (17:23-14). The epilogue, which some believe to be composed by a later writer, praises the martyrs to the extent of crediting them with saving the nation from its crisis.

Those who gave over their bodies in suffering for the sake of religion were not only admired by men, but also were deemed worthy to share in a divine inheritance. Because of them the nation gained peace, and by reviving observance of the law in the homeland they ravaged the enemy (18:3-4).

The book ends by declaring that the seven "sons of Abraham with their victorious mother are gathered together into the chorus of the fathers, and have received pure and immortal souls from God."

Readers of 4 Maccabees who are aware of 2 Maccabees cannot help but feel that the author has allowed his philosophical agenda to interfere with the story. In 2 Maccabees, the martyrs' deaths are related in a relatively straightforward fashion, resulting in a truly touching account of Jewish heroism in the face of the horrible tyranny of Antiochus IV. 4 Maccabees, on the other hand, not only goes into excruciating detail about the torture of the martyrs, but causes them to make the author's own philosophical points for him in their conversations with each other and Antiochus. 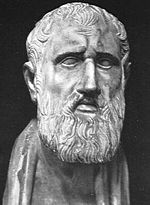 Zeno, the founder of Stoicism

In style, the book is oratorical, but not so much as 3 Maccabees. A good amount of Stoic philosophy is cited by the author, though there is little original philosophical insight in the text. The writer appears to be an Alexandrian Jew who applied the philosophical ideas of the time to his religious ideas. This characterization is cited as the best example of syncretism between Jewish and Hellenistic thought. However, it should be noted that the book also constitutes an adamant rejection of Jewish compromise with Hellenistic culture in terms of religious practice.

The book is anonymous, but was ascribed to the first century CE Jewish historian Josephus by Eusebius and Jerome. This opinion was accepted for many years, leading to its inclusion in many editions of Josephus' works. Modern critical scholarship, however, points to great differences of language and style, so that this identification is largely abandoned today. The book is generally dated between the first century B.C.E. and the first century C.E. It was probably written before the persecution of the Jews under Caligula, and certainly before the fall of Jerusalem in 70 C.E.

According to some scholars, the last chapter (18) shows signs of a later addition to the work, though this was disputed on the basis that the change of direction from chapter 17 fits with the view of the work as a homily read to a Greek-speaking Jewish audience on the feast of Hanukkah, where this shift would be a rhetorical element to conclude and draw the listeners into the discourse. Others hold that a homily would be based more directly on scriptural texts.

The writer believes in the immortality of the soul, but does not affirm the Pharisaic belief in the resurrection of the body, as does 2 Maccabees. Good souls are said to live forever in happiness with the patriarchs and God, but even the evil souls are held to be immortal. The suffering and martyrdom of the pious Maccabees is seen by the author to be vicarious for the Jewish nation, and the author portrays martyrdom in general as bringing atonement for the past sins of the Jews. Little is said of the military exploits of Judas Maccabeus and his brothers, which occupies the central focus in 1 Maccabees and, to a lesser extent, 2 Maccabees.