The Second Epistle to Timothy is one of the three Pastoral Epistles attributed to Saint Paul and is part of the canonical New Testament. Traditionally, it is believed to have been written sometime in 67 C.E. during Paul's Roman imprisonment, near the end of his life. However, many contemporary scholars believe that it—like 1 Timothy and Titus, the other Pastoral Epistles—was written in Paul's name by another writer sometime after Paul's death.

In his letter, the writer urges Timothy to not have a "spirit of timidity" or to be "ashamed to testify about our Lord" (1:7-8). He also entreats Timothy to come to him before winter, because "the time of my departure is at hand" (4:6). He exhorts his reader to all diligence and steadfastness in the face of false teachings, to patience under persecution (1:6–15), and to a faithful discharge of all the duties of his office (4:1–5), presumably that of bishop.

The letter is particularly important for its insistence (3:16) that "all scripture is 'God breathed'," affirming that the Hebrew Bible is inspired by the same God as the Christian scriptures. In the mid-second century C.E., this was a key issue in the battle between the orthodox church and Marcionism, which taught the "Old Testament" should be rejected by Christians. 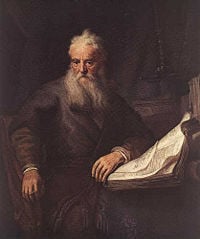 Rembrandt's Saint Paul. If 2 Timothy was indeed written by Paul, it would have been composed near the end of the Apostle's life.

Paul is traditionally believed to be the author of 2 Timothy, which contains numerous personal details, ranging from the names of Timothy's mother and grandmother to a request that he bring to Rome "the cloak that I left with Carpus at Troas, and my scrolls, especially the parchments." (4:13) Beginning in the nineteenth century, however, scholars expressed doubts about the Pauline authorship of this letter, along with 1 Timothy and Titus. In support of the proposition that the Pastoral Epistles were actually written after Paul's death, critics point to such factors as:

Pseudonymous literature was common in the ancient world, and was usually created in the spirit of honoring the person in whose name it was written. Thus, if these letters were indeed written by someone other than Paul, they should not be considered as dishonest forgeries, but sincere attempts to invoke the name and spirit of Paul to bring the message he would have brought to a later period. An analogy in modern times is the tradition of "channeled" writings from a person no longer living.

The purpose of 2 Timothy depends somewhat on whether one believes it was written by Paul or someone else. If Paul is indeed the author, then the purpose is fairly straightforward: to encourage Timothy—Paul's own spiritual son, loyal companion, and now a bishop—to maintain and strengthen his faith during a time of both persecution and confusion, due to the presence of heretical teachers in his congregation. In this case the letter also has a personal purpose: to request Timothy to join Paul, who has been deserted in his hour of need by several of his closest associates, and even to bring some personal items such as a cloak and writing materials. If it is not by Paul, then 2 Timothy's purpose is more general: to encourage Christians (the collective "Timothy" in this case) to endure through persecution and stand strong against heresy.

In the latter case, the heresies in question are also more identifiable than if the letter is authentically Pauline. One of them is probably Marcionism, which taught that the Jewish scriptures were not inspired by the loving "Heavenly Father" of Jesus, but by a lesser, wrathful deity. "Paul" thus counters the Marcionite view that the Old Testament should be rejected by Christians, stating instead that "all Scripture is God-breathed," referring especially to the scriptures of Timothy's own background, being raised by a Jewish mother and grandmother. Another targeted heresy is apparently Gnosticism, which by the second century had developed a sophisticated cosmology denigrated here as "myths" (4:4). Many Gnostics also denied the physical resurrection of Jesus, affirming that what matters is not the body but the enlightenment of the spirit. Thus "Paul" decries the doctrine of Hymenaeus and Philetus, who have "wandered away from the truth" and taught that "the resurrection has already taken place." Both Gnosticism and Marcionism may also be in the author's mind when he speaks of his own message of preaching Jesus as "raised from the dead, descended from David," thus affirming both the resurrection and the continuity of Christianity with the Old Testament tradition.

In terms of date, if 2 Timothy is by Paul, then it would be written very late in the Apostle's life, probably around 67 C.E. Some scholars take the view that 2 Timothy was written prior to 1Timothy. If Marcionism is one of the writer's targets, then it could not have been written earlier than the middle of the second century C.E. However, a number of critical scholars believe the writer, though someone other than Paul, was writing against earlier heresies, such as an early form of Gnosticism and a pre-Marcionite version of the doctrine which considered the Old Testament to be invalid.

All scripture is given by inspiration of God, and is profitable for doctrine, for reproof, for correction, for instruction in righteousness—2 Tim. 3:16

The epistle begins with a salutation from Paul to Timothy, his spiritual son, and now a bishop, traditionally at Ephesus. "Paul" gives thanks to God for Timothy's faith and suffering. However, he urges Timothy to "fan into flame the gift of God." The writer mentions that this gift came to Timothy through "the laying on of my hands."[1] He reminds Timothy, who seems to have wavered somewhat in his faith, that "God did not give us a spirit of timidity, but a spirit of power." Timothy should "not be ashamed to testify about our Lord," for Paul himself remains bold in his faith, despite being imprisoned and facing death. Paul complains that "everyone in the province of Asia has deserted me," specifically naming two otherwise unknown persons named Phygelus and Hermogenes. On the other hand, the equally obscure Onesiphorus has gone to considerable lengths to find Paul in his captivity and to support him. (chapter 1)

Timothy is to follow the examples of Paul and Onesiphorus by remaining strong in his faith, as a good "soldier" of Christ. "Paul" describes his gospel as "Jesus Christ, raised from the dead, descended from David," an unusual formula, since Paul normally couples the resurrection of Christ with his crucifixion, not his Davidic lineage. "Paul" specifically names two false teachers whose doctrines Timothy must combat: Hymenaeus and Philetus. Their heresy is that "the resurrection has already taken place." The author urges Timothy to "flee from the evil desires of youth" and to avoid unnecessary arguments. He is to gently instruct those of his congregation who have strayed, in the hope that they will "come to their senses" and escape from the "trap of the devil, who has taken them captive to do his will." (chapter 2)

Writing from prison in Rome, Paul is abandoned by most of his supporters and requests Timothy to come to him, bringing needed supplies, including a cloak and writing implements.

On the other hand, Timothy must "have nothing to do with" certain types of evildoers who will arise in the Last Days: lovers of themselves, lovers of money... disobedient to their parents, unholy, without love, unforgiving, slanderous, without self-control... lovers of pleasure rather than lovers of God—-having a form of godliness but denying its power." (3:2-5) Timothy must manifest the opposite virtues to these vices, remaining faithful, patient, and loving, and realizing that "everyone who wants to live a godly life in Christ Jesus will be persecuted." Timothy, raised by a Jewish mother and grandmother, is steeped in the Hebrew Scriptures and well equipped to cope with the challenges that face the believer, for: "All scripture is God-breathed and is useful for teaching, rebuking, correcting and training in righteousness." (chapter 3)

I have fought the good fight, I have finished the race, I have kept the faith.—2 Tim. 4:7

Timothy must preach God's word carefully, for the time is coming when "men will not put up with sound doctrine" and a "great number of teachers" will arise with a false preaching, causing many Christians to "turn aside to myths." Paul himself is "poured out like drink" and nearly at the point of being sacrificed. Yet "I have fought the good fight, I have finished the race, I have kept the faith." The letter closes remarkably with a litany of regrets: a disciple named Demas has "deserted me," Crescens likewise has left, and even Titus gone to Dalmatia. "Only Luke is with me." Timothy is urged to "get Mark and bring him with you." Apparently in one stage of Paul's trial, "no one came to my support." However, he was granted at least a temporary reprieve and hopes that "it will not be held against them. However, he also recalls that "Alexander the metalworker" has done him great harm. In this case, he hopes that "the Lord will repay him for what he has done" and that Timothy will be on guard against him. In closing he sends greetings to "Priscilla and Aquila and the household of Onesiphorus" and sends a blessing. (chapter 4)

The Second Epistle to Timothy left a lasting impact of Christian tradition. One of its most famous phrases—"All scripture is given by inspiration of God, and is profitable for doctrine, for reproof, for correction, for instruction in righteousness" (2 Tim. 3:16—NIV)—is important for two reasons. In the early church, it strengthened the orthodox view that the Jewish scripture was indeed inspired by God and could be used with authority by Christian teachers. In modern times, it has been used to justify the doctrine of the verbal inspiration of scripture. In this case, even though the New Testament canon had not yet been compiled at the time of its writing, the verse is interpreted to refer to the Christian scriptures as well as the Old Testament.

2 Timothy also provides the one reference in Paul's purported letters which mentions Paul's companion Mark, who by later tradition was the author of the Gospel which today bears his name. (Mark is mentioned several times in the Book of Acts, but nowhere else in Paul's letter.) In a similar vein, 2 Timothy is one of three places in the entire New Testament—the others being Colossians 4:14 and Philemon 1:24—which mentions Paul's companion Luke, traditionally believed to have written both the Gospel of Luke and the Book of Acts.