The Book of Jeremiah, is part of the Hebrew Bible, and is also included in Christianity's Old Testament. It was originally written in a complex and poetic Hebrew, recording the words and events surrounding the life of the prophet Jeremiah, who lived in the late seventh and early sixth century B.C.E. in Jerusalem, during the fall of the Kingdom of Judah at the hands of Babylonia.

Together with the books of Isaiah and Ezekiel, the Book of Jeremiah represents the highest point of the prophetic literature of ancient Israel. It is best known for its theme of the "New Covenant," in which a personal relationship with God will replace external observances such as temple sacrifice. It also emphasizes such themes as God's personal love for his people as both parent and a husband, the need for national and person repentance, and the importance of sincere religious faith rather than formal adherence to external ceremony.

The book is also an important source of historical information about the period just prior to, during, and after the fall of Jerusalem to King Nebuchadnezzar II of Babylon, whom the Book of Jeremiah portrays at some points as "God's servant" rather than an enemy to be resisted. Several of the book's key concepts were later adopted by Jesus and the writers of the New Testament, the very name of which is an alternate translation of Jeremiah's New Covenant theme. 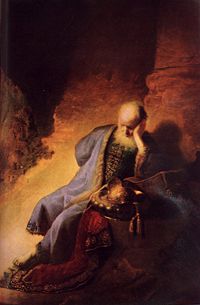 The prophet Jeremiah was a son of a priest from Anatoth in the land of Benjamin, who lived in the last decades of the Kingdom of Judah, culminating in the destruction of Solomon's Temple under King Nebuchadnezzar of Babylon. Jeremiah repeatedly issued prophecies predicting God's forthcoming judgment, advocating repentance in hopes of turning away God's wrath. He ultimately came to see King Nebuchadnezzar not as an enemy but as God's "servant" (25:9 etc.), chosen to carry out divine judgment. He urged a policy of non-resistance to the Babylonians and urged the first wave of exiles to settle into their new lives and pray for the Babylonian king (29).

To some, such acts constituted treason. Jeremiah was thus denounced by other prophets and priests, who believed God would deliver Judah if the nation fought back against Babylonian aggression. Jeremiah found himself banned from the Temple and imprisoned on more than one occasion. After the Babylonians put down a rebellion by King Zedekiah, Jeremiah was given special treatment by the invaders, while Zedekiah was blinded and taken captive to Babylon, and both the Temple and city of Jerusalem were destroyed. After a subsequent rebellion against the Gedaliah, whom the Babylonians had placed in charge of Judah, Jeremiah fled to Egypt and seems to have died in exile there. 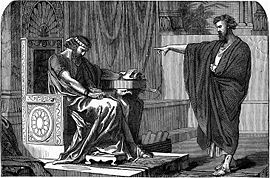 The Book of Jeremiah depicts a remarkably introspective prophet, struggling with and often overwhelmed by the role into which he has been thrust. More than any historical figure in the Bible, Jeremiah bears his soul to his readers. His self-portrait is not one of inner peace and harmony with the Divine. "Why is my pain unending and my wound grievous and incurable?" he complains to God. "Will you be to me like a deceptive brook, like a spring that fails?"

Having surrendered to the divine will at an early age, Jeremiah apparently became a lifelong celibate at God's command, something unprecedented in the history of the prophets. He faced assassination plots from people in his own hometown, as well as official opposition that cost him his freedom several times and nearly cost him his life. In the end, Jeremiah would be known as one of the greatest of the prophets, whose sacrifices left an enduring legacy of hope for mankind. But in his own lifetime, it can only be concluded that his closeness to God brought him deepest sorrow and loneliness. Jeremiah prophesizes at one of Jerusalem's gates.

A simple way to understand the basic division of the book is as follows:

It its current form, the book does not appear to follow a coherent chronological order, and many theories have developed concerning its authorship and textual history. The book itself refers to the scribe Baruch as writing down some of Jeremiah's prophecies verbatim, it is traditionally believed that Baruch is also responsible for the third-person narratives of the book. Scholars are agreed that many or most of the book's prophecies are genuine, but many are controversial, especially those contained in chapters 46–51. The book as it stands today is the product of a long process of editing and redaction.

Did you know?
The Book of Jeremiah is best known for its theme of the "New Covenant" that involves a personal relationship with God

Possibly the most enduring theme of the Book of Jeremiah is the idea of a New Covenant.

"The time is coming," declares the Lord, "when I will make a new covenant with the house of Israel and with the house of Judah. It will not be like the covenant I made with their forefathers when I took them by the hand to lead them out of Egypt... I will put my law in their minds and write it on their hearts. I will be their God, and they will be my people." (31:31-33)

The Book of Jeremiah, more than any previous biblical book, also develops the concept of God's love and the importance of man's faithfulness. God is a loving father to his people, and he mourns their estrangement:

Is not Ephraim my dear son, the child in whom I delight? Though I often speak against him, I still remember him. Therefore my heart yearns for him; I have great compassion for him," declares the Lord. (31:39)

The book also describes God's love for his people in terms of the conjugal relations between man and wife: "I remember the devotion of your youth, how as a bride you loved me and followed me through the desert, through a land not sown" (2:2). "I am your husband," God declares to Israel, "'Return... I will frown on you no longer" (3:11-12).

God's compassion for his people to be so intense as to cause God to weep in sympathetic pain:

Let my eyes overflow with tears night and day without ceasing; for my virgin daughter—my people—has suffered a grievous wound, a crushing blow. (14:17) 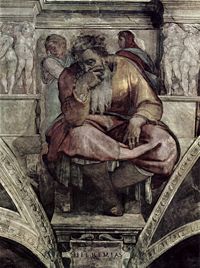 Michelangelo's Jeremiah on the ceiling of the Sistine Chapel.

Like other biblical prophets, Jeremiah strongly condemned idolatry, which he likened to a wife's committing adultery, and warned of doom for God's people if they did not repent. His prophecies betray a tortured soul who must stand reluctantly for an angry God before the people, while also standing for the people before God. He sometimes spoke as if God's anger, resulting from his people's lack of faith, was so great that there was no hope of salvation:

Then the Lord said to me, "Do not pray for the well-being of this people. Although they fast, I will not listen to their cry; though they offer burnt offerings and grain offerings, I will not accept them. Instead, I will destroy them with the sword, famine and plague." (14:11-12)

Yet, in other prophecies, Jeremiah conveyed the hope that it was never too late for repentance:

"If at any time I announce that a nation or kingdom is to be uprooted, torn down and destroyed, and if that nation I warned repents of its evil, then I will relent and not inflict on it the disaster I had planned." (18:7-8)

The Book of Jeremiah emphasizes the seriousness and pervasiveness of sin, which it portrays as offending God deeply:

"From the least to the greatest, all are greedy for gain; prophets and priests alike, all practice deceit. They dress the wound of my people as though it were not serious. 'Peace, peace,' they say, when there is no peace. Are they ashamed of their loathsome conduct? No, they have no shame at all; they do not even know how to blush. So they will fall among the fallen; they will be brought down when I punish them," says the Lord. (6:13-15)

The theme of true versus false religion is also prevalent in the book, whether practiced in Canaanite shrines or in the name of Yahweh himself:

The people of Judah have done evil in my eyes, declares the Lord. They have set up their detestable idols in the house that bears my Name and have defiled it. They have built the high places of Topheth in the Valley of Ben Hinnom to burn their sons and daughters in the fire—something I did not command, nor did it enter my mind. (7:30-31)

True religion must be practiced first and foremost in the heart of the individual. Like Hosea, Isaiah, and other prophets before him, Jeremiah stressed the need for morality, spiritual sincerity, and social justice over external piety and Temple ritual. He challenged the priestly authority directly, saying in God's name:

What do I care about incense from Sheba or sweet calamus from a distant land? Your burnt offerings are not acceptable; your sacrifices do not please me. (6:20) ...I did not speak to your fathers or command them in the day that I brought them out of the land of Egypt concerning burnt offerings and sacrifices. But this is what I commanded them, saying, 'Obey my voice, and I will be your God, and you will be my people; and you will walk in all the way which I command you, that it may be well with you.' (7:21-23)

Thus for Book of Jeremiah, the "circumcision of the heart" is more important than the circumcision of the flesh (4:4). The prophet wrestled with God over the question of moral and social evil: "O Lord... I would speak with you about your justice. Why does the way of the wicked prosper? Why do all the faithless live at ease?" (12:1). He threatened kings with God's wrath if they did not administer justice properly (21:12) and demanded that the wealthy citizens of Judah liberate their slaves of Hebrew birth (43). 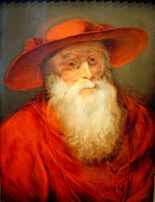 Saint Jerome translated the Book of Jeremiah from Greek and Hebrew into Latin.

The Septuagint version also includes the Book of Baruch and the supposed Letter of Jeremiah. The great early translator Saint Jerome explained that his rational for not including these in his Latin version of the book was based on the fact that it was not accepted as scripture by the Jews. However, the Council of Trent later included them as part of the authorized apocrypha of the Old Testament.

Parts of the Book of Jeremiah have also been found among the Dead Sea Scrolls in cave 4 in Qumran. These texts, in Hebrew, correspond sometimes with the Masoretic text and other times the Septuagint.

The Book of Jeremiah strongly influenced the attitude and writings of the New Testament. Like Jeremiah, Jesus predicted that the Temple of Jerusalem would be made desolate if the rulers, priests, and people did not respond to God's call. Jesus even quoted Jeremiah 7:11 in his words to the moneychangers in the Temple courtyard, saying: "Is it not written, 'My house will be called a house of prayer for all nations'?"