The Book of Tobit (or Book of Tobias in older Catholic Bibles) is a book of scripture that is part of the Catholic and Orthodox biblical canon, pronounced canonical by the Council of Carthage of 397 and confirmed for Roman Catholics by the Council of Trent (1546). It is also listed in Article VI of the Thirty-nine Articles of the Church of England. However, the Boof of Tobit is regarded by Protestants as apocryphal since it was not included within the Tanakh canon of ancient Judaism. Nevertheless, it is found in the Greek Old Testament (the Septuagint), Aramaic and Hebrew fragments of the book were discovered in Cave IV at Qumran in 1955. These fragments are generally in agreement with the Greek text, which exists in three different recensions. 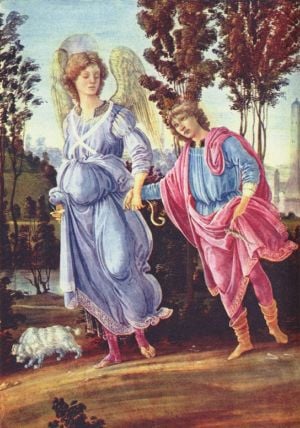 Tobias and the Angel, by Filippino Lippi

The book tells the story of a righteous Jew of the Tribe of Naphtali named Tobit living in Nineveh after the deportation of the northern tribes of Israel to Assyria in 721 B.C.E. under Sargon II. (The first two and a half chapters are written in the first person.) Tobit was particularly noted for his diligence in attempting to provide proper burials for fallen Jews who had been slain by Sennacherib, for which the king seized all his property and exiled him. After Sennacherib's death, he was allowed to return to Nineveh, but again buried a dead man who had been murdered on the street. That night, he slept in the open and was blinded by bird droppings that fell in his eyes. This put a strain on his marriage, and ultimately, he prayed for death.

Meanwhile, in faraway Media, a young woman named Sarah prays for death in despair. She has lost seven husbands to the demon of lust—Ashmodai (a demon frequently associated with homosexuality), who abducts and kills every man she marries on their wedding night before the marriage can be consummated. God sends the angel Raphael, disguised as a human, to heal Tobit and to free Sarah from the demon.

The main narrative is dedicated to Tobit's son, Tobiah or Tobiyah (Greek: Tobias), who is sent by his father to collect a sum of money that the latter had deposited some time previously in the far off land of Media. Raphael represents himself as Tobit's kinsman, Azariah, and offers to aid and protect Tobias on his journey. Under the guidance of Raphael, Tobias makes the journey to Media. Along the way, he is attacked by a giant fish, whose heart, liver and gall bladder are removed to make medicines.

Upon arriving in Media, Raphael tells Tobias of the beautiful Sarah, whom Tobias has the right to marry, because she is related to his tribe. He instructs the young man to burn the fish's liver and heart to drive away the demon when he attacks on the wedding night. The two are married, and the fumes of the burning organs drive the demon away to Upper Egypt, while Raphael follows him and binds him. Meanwhile, Sarah's father has been digging a grave to secretly bury Tobias (who he assumes will be dead). Surprised to find his son-in-law alive and well, he orders a double-length wedding feast and has the grave secretly filled. Since he cannot leave because of the feast, Tobias sends Raphael to recover his father's money.

After the feast, Tobias and Sarah return to Nineveh. There, Raphael tells the youth to use the fish's gall to cure his father's blindness. Raphael then reveals his true identity and returns to heaven. Tobit sings a hymn of praise, and tells his son to leave Nineveh before God destroys it according to prophecy. After burying his father, Tobias returns to Media with his family.

The book of Tobit is typically placed in the Vulgate among the historical books of the Old Testament, but most scholars regard it more as a religious novel with certain historical elements. Many of the historical details in the book contradict what is known about the history of the period from extra-Biblical sources but Roman Catholic Bible scholars have provided a variety of ways for explaining these apparent discrepancies from these relatively modern texts.

The book is also closely related to Jewish wisdom literature; nowhere is this more clear than in Tobit's instructions to Tobias before his departure for Media in Chapter Four. The value of prayer, fasting, and almsgiving is particularly praised in this instruction; the Catholic Church often uses readings from this section in its liturgy. Additionally, the book's praise for the purity of marriage is often read during Catholic weddings.

Doctrinally, the book is cited for its teaching on the intercession of angels, filial piety, and reverence for the dead.

The Sadducees' challenge to Jesus about the woman that had seven husbands serially (e.g., Mark 12:20-22) may have been an allusion to this book’s story, with Tobit’s righteous son Tobias as Sarah’s ultimate husband.[1]

It is generally believed that the book was written in the second century B.C.E., on the basis of the scrupulous attention to ritual details and the stress laid upon giving alms. However, neither the date nor location of composition is certain.

The book was probably originally written in Aramaic. It appears that Jerome's version for the Vulgate was made from an Aramaic text available to him. Four fragmentary texts in Aramaic and one in Hebrew were found at Qumran.

The surviving Greek translations are found in two versions. The shorter form, called Greek I by Robert Harnhart in his edition of the Septuagint, is found in Codex Vaticanus, Codex Alexandrinus, Venetus, and most cursive manuscripts. The Greek II version, which is 1700 words longer, is found in Codex Sinaiticus and closely aligns with the Hebrew and Aramaic fragments found at Qumran. Apparently the Old Latin manuscripts are also translated from the longer Greek II version. Most English translations since 1966 have relied on the Greek II version. Some ancient texts of Tobit give Hebraized names Midian (originally the name of the land east of the Gulf of Aqabah) for Media, and Batanea (originally the name of land in the Golan Heights) for Ecbatana. One such text is the Heb. Londinii (or HL) version.[2]