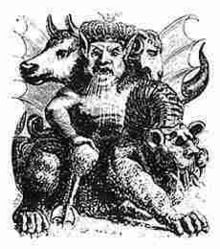 A depiction of Asmodeus in Collin de Plancy's Dictionnaire Infernal.

Asmodai (or Asmodeus) (Other spelling variations of the name include Ashmadia, Ashmedai, Asmodaios-Ασμοδαίος, Asmoday, Asmodée, Asmodee, Asmodei, Ashmodei, Ashmodai, Asmodeios, Asmodeo, Asmodeu, Asmodeius, Asmodi, Chammaday, Chashmodai, Sidonay, and Sydonai) is a semi-Biblical demon described primarily in the deuterocanonical Book of Tobit, and mentioned in Talmudic legends such as the story of the construction of the Temple of Solomon. In some rabbinic sources, Asmodai was considered to be the king of the demons (Targ. to Eccl. i. 13; Pes. 110a; Yer. Shek. 49b) analogous to Samael ("the angel of death") or "Satan."

The existence of demons is a common belief in many world religions and cultures from Asia through Africa and the Middle East to North America. In many religions, demons are the antithesis of goodness, locked in an ultimately futile and losing struggle against God; nevertheless, some religions see demons as ultimately redeemable beings.

The name "Asmodai" derives from the Avestan language: Aeshma-daeva, where aeshma means "wrath," and daeva signifies "demon." While the daeva Aeshma is thus Zoroastrianism's demon of wrath and is also well attested as such, the compound aeshma-daeva is not attested in scripture. It is nonetheless likely that such a form did exist, and that the Book of Tobit's "Asmodeus" (Ασμοδαῖος) and the Talmud's "Ashmedai" (ˀšmdˀy) reflect it.

Although there are also functional parallels between Zoroastrianism's Aeshma (demon of "wrath") and Judaism's Asmodai/Asmodeus, the linguistic relationship does not necessarily denote conceptual continuity.

In the Book of Tobit

The Asmodeus of the Book of Tobit is attracted by Sarah, Raguel's daughter, and is not willing to let any husband possess her (Tobit, vi.13); hence he slays seven successive husbands on their wedding-nights, thus impeding the consummation of the sexual act. When the young Tobias is about to marry her, Asmodeus purposes the same fate for him; but Tobias is enabled, through the counsels of his attendant angel Raphael, to render him innocuous. By placing a fish's heart and liver on red-hot cinders, Tobias produces a smoky vapor which causes the demon to flee to Egypt, where Raphael binds him (viii.2, 3).

Asmodeus would thus seem to be a demon characterized by carnal desire; but he is also described as an evil spirit in general: 'Ασμοδαίος τὸ πονηρὸν δαιμόνιον or τõ δαιμόνιον πονηρόν, and πνεῦμα ἀκάϑαρτον (iii.8, 17; vi.13; viii.3). It is possible, moreover, that the statement (vi.14), "Asmodeus loved Sarah," implies that he was attracted not by women in general, but by Sarah only.

The figure of Ashmedai in the Talmud is less harmful in character than Tobit's Asmodeus. In the former, he appears repeatedly in the light of a good-natured and humorous fellow. But besides that, there is one feature in which he parallels Asmodeus, inasmuch as his desires turn upon Solomon's wives and Bath-sheba. But even here, Ashmedai seems more comparable to a Greek satyr, rather than to an evil demon.

Another Talmudic legend has King Solomon tricking Asmodai into collaborating in the construction of the temple of Jerusalem. In yet another legend Asmodai changed place for some years with King Solomon. An aggadic narrative describes him as the king of all the shades (Pesachim 109b-112a). Another passage describes him as marrying Lilith, who became his queen.[1]

It is also stated that he was the off-spring of the union between Adam and the angel of prostitution, Naamah, conceived whilst Adam was married to Lilith.

In the Testament of Solomon

In the Testament of Solomon, a first-third century text, the king invokes Asmodeus to aid in the construction of the Temple. The demon appears and predicts Solomon's kingdom will one day be divided (Testament of Solomon 5:4-5). When Solomon interrogated Asmodeus further, the king learns that Asmodeus is thwarted by the angel Raphael, as well as by sheatfish found in the rivers of Assyria. He also admits to hating water.

In the Malleus Maleficarum

In the Malleus Maleficarum (1486), Asmodai was considered the demon of lust, to which agreed Sebastian Michaelis saying that his adversary is St. John. Some demonologists of the sixteenth century assigned each month to a demon and considered November to be the month in which Asmodai's power was stronger. Other demonologists asserted that his zodiacal sign was Aquarius but only between the dates of January 30 and February 8.

He has seventy-two legions of demons under his command. He is one of the Kings of Hell under Lucifer the emperor. He incites gambling, and is the overseer of all the gambling houses in the court of Hell. Some Catholic theologians compared him with Abaddon. Yet other authors considered Asmodai a prince of revenge.

In the Dictionnaire Infernal

In the Dictionnaire Infernal by Collin de Plancy, Asmodai is depicted with the breast of a man, legs of a cockerel, serpent tail, three heads (one of a man spitting fire, one of a sheep, and one of a bull), riding a lion with dragon wings and neck, all of these animals being associated with either lascivity, lust or revenge.

In the Lesser Key of Solomon

Asmodai appears as the king "Asmoday" in the Ars Goetia, where he is said to have a seal in gold and is listed as number thirty-two according to respective rank.[2]

He "is strong, powerful and appears with three heads; the first is like a bull, the second like a man, and the third like a ram; the tail of a serpent, and from his mouth issue flames of fire." Also, he sits upon an infernal dragon, holds a lance with a banner and, amongst the Legions of Amaymon,, Asmoday governs seventy two legions of inferior spirits.