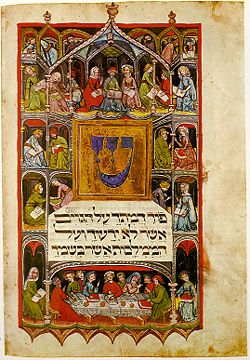 A 14th century German illuminated Haggadah for Passover. The text on this page begins Psalm 79 verse 6.

Haggadah (meaning "tales," "lore"; pl. Haggadot ) refers to non-legally binding texts in classical rabbinic literature, which are primarily of an exegetic and homiletic nature. Other terms for this body of teachings are Aggadata (אגדתא) lit.“the” aggada, and Aggadah (הגדה; pl. Aggadot). In general, the Haggadot are presented as folklore, historical anecdotes, moral exhortations, and advice. Sometimes they refer to mythical creatures, and incredible historical events. Some Rabbis have suggested that Haggadah may contain two types of meaning as recorded in the Talmud and Midrash: literal and allegorical. It is said that only those with the proper spiritual "keys" can unlock the higher allegorical meaning of the Haggadah (see below).

Part of the Jewish oral law

The Haggadah is part of Judaism's Oral law (תורה שבעל פה)—the traditions providing the authoritative interpretation of the Written Law. In this context, the widely held view in Rabbinic literature, is that the Haggadah is in fact a medium for the transmission of important teachings (Homiletic Sayings - מאמרים לימודיים) or for explanations of verses in the Tanakh (Exegetic Sayings - מאמרים ביאוריים). Much of the Haggadah is understood as containing a hidden, allegorical dimension, in addition to its overt, literal sense. In general, where a literal interpretation contradicts rationality, the Rabbis seek an allegorical explanation and are told to use commonsense to decide whether an aggada is to be taken literally or not.

Moshe Chaim Luzzatto discusses this two-tiered, literal-allegorical mode of transmission of the Haggadah in his well known Discourse on the Haggadot. He explains that the Oral Law, in fact, comprises two components: the legal component (חלק המצוות), which discusses the mitzvot and halakha; and "the secret" component (חלק הסודות), which discusses the deeper teachings. The Haggadah, along with the Kabbalah, falls under the latter. The Rabbis of the Mishnaic era, realized the danger of recording the deeper teachings in explicit, mishnah-like, medium. Rather, they would be conveyed in a "concealed mode" and via "paradoxes." It was thought that due to their value, these teachings should not become accessible to those "of bad character" and due to their depth they should not be made available to those "not schooled in the ways of analysis." This mode of the transmission was nevertheless based on consistent rules and principles such that those "equipped with the keys" would be able to unlock their meaning; to others they would appear as non-rational or fantastic.

Interpretation of the Haggadah

In line with the above, Shmuel ha-Nagid, in his "Introduction to the Talmud," states that "Aggadah comprises any comment occurring in the Talmud on any topic which is not a commandment (i.e. which is not halachic) and one should derive from it only that which is reasonable." As regards this, Maimonides, in his preface to the tenth chapter of Mishnah Sanhedrin ("Perek Chelek"), describes three possible approaches to the interpretation of the Haggadah.

In the Talmud and Midrash

The Haggadah is today recorded in the Talmud and the Midrash. Throughout the Talmud, Haggadic and halakhic material are interwoven—legal material comprises around 90 percent. (Tractate Avoth, which has no Gemara, deals exclusively with non-halakhic material, though it is not regarded as aggadic in that it is focused, largely, on character development.) The Talmudic Haggada, generally, convey the "deeper teachings"—though in concealed mode, as discussed. The Ein Yaakov is a compilation of the Haggadic material in the Babylonian Talmud together with commentaries.

Well known works interpreting the Haggadot in the Talmud include:

In the Midrash, the Haggadic and halakhic material are compiled as two distinct collections: the Haggadic Midrashim, generally, are explanatory aggada, deriving the "sermonic implications" from the biblical text; the Halakhic Midrashim derive the laws from the text. Note that many of the Torah commentaries, and the Targumim, interpret the Torah text in the light of Aggadic statements, particularly those in the Midrash, and hence contain much material on Haggadah interpretation.

Development of the Haggadah

The Haggadah has been preserved in a series of different works, which, like all works of traditional literature, have come to their present form through compilation and revisions. Their original forms existed long before they were reduced to writing.

The first traces of the midrashic exegesis are found in the Bible itself. In the time of the Soferim, the development of the Midrash Haggadah received a mighty impetus, and the foundations were laid for public services which were soon to offer the chief medium for the cultivation of Bible exegesis.

Much Haggadah, often mixed with foreign elements, is found in the Apocrypha, the Pseudepigrapha, the works of Josephus and Philo, and the remaining Judæo-Hellenistic literature; but Haggadic exegesis reached its height in the great epoch of the Mishnaic-Talmudic period, between 100 and 550 C.E..

It is important to emphasize the difference between exegetical and homiletic Haggadot. When the Rabbis undertook to edit, revise, and collect the immense array of Haggadot, they followed the method employed in the halakic discussions. They arranged in textual sequence the exegetical interpretations of the Biblical text as taught in the Rabbinical schools. The work of the editor was often merely that of compilation, and the midrashim are in the nature of running haggadic commentaries to single books of the Hebrew Bible.