TaNaK (Hebrew: תנ״ך), or Tanakh, is an acronym for the Hebrew Bible consisting of the initial Hebrew letters (T + N + K) of each of the text's three major parts. Since the ancient Hebrew langauge had no clear vowels, subsequent vowel sounds were added to the consonants resulting in the word TaNaK. The major portions of the Hebrew Bible represented by these three letters are:

In Hebrew, the Tanakh is also called מקרא, Mikra or Miqra, meaning "that which is read. The Tanakh is not only sacred scripture for the Jews but is also considered by Christians to be divinely inspired.

According to the Jewish tradition, the Tanakh consists of 24 books (enumerated below). The Torah has five books, Nevi'im eight books, and Ketuvim has 11.

These 24 books are the same books found in the Protestant Old Testament, but the order of the books is different. The enumeration differs as well: Christians count these books as 39, not 24. This is because Jews often count as a single book what Christians count as several. However, the term Old Testament, while common, is often considered pejorative by Jews as it can be interpreted as being inferior or outdated relative to the New Testament.

In the Christian Bible, Daniel and the Book of Esther sometimes include extra deuterocanonical material that is not included in either the Jewish or most Protestant canons.

The acronym "Tanakh" was not used during the period of the Second Temple; rather, the proper term Mikra ("Reading") was used, which had a more formal flavor. Today, the Tanakh is also called the Hebrew Bible because most of its books were predominantly written in Hebrew. While parts of Daniel and Ezra, as well as a sentence in Yir'm'yahu (Jeremiah) and a two-word toponym in B'reshit (Genesis), are in Aramaic, even these are written in the same Hebrew script.

Books of the Tanakh

The Hebrew text originally consisted only of consonants, together with some inconsistently applied letters used as vowels (matres lectionis). During the early middle ages, Masoretes codified the oral tradition for reading the Tanakh by adding two special kinds of symbols to the text: niqud (vowel points) and cantillation signs. The latter indicate syntax, stress (accentuation), and the melody for reading. 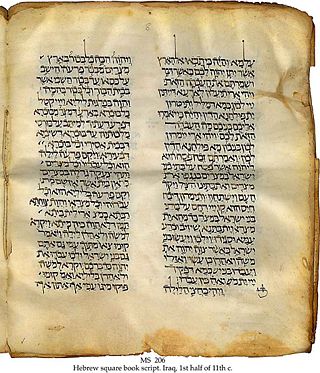 The books of the Torah have generally-used names which are based on the first prominent word in each book. The English names are not translations of the Hebrew; they are based on the Greek names created for the Septuagint which in turn were based on Rabbinic names describing the thematic content of each of the Books.

The Torah ("Law") [also known as the Pentateuch] consists of:

The books of Nevi'im ("Prophets") are:

The chapter divisions and verse numbers have no significance in the Jewish tradition. Nevertheless, they are noted in all modern editions of the Tanakh so that verses may be located and cited. The division of Samuel, Kings, and Chronicles into parts I and II is also allowed in order to prevent confusion about which part is indicated, following the Christian textual tradition.

The adoption of the Christian chapter divisions by Jews began in the late middle ages in Spain, partially in the context of forced clerical debates which took place against a background of harsh persecution and of the Spanish Inquisition (the debates required a common system for citing biblical texts). From the standpoint of the Jewish textual tradition, the chapter divisions are not only a foreign feature with no basis in the mesorah, but also open to severe criticism of two kinds:

Nevertheless, because they proved useful—and eventually indispensable—for citations, they continued to be included by Jews in most Hebrew editions of the Biblical books.

The chapter and verse numbers were often indicated very prominently in older editions, to the extent that they overshadowed the traditional Jewish masoretic divisions. However, in many Jewish editions of the Tanakh published over the past 40 years, there has been a major historical trend towards minimizing the impact and prominence of the chapter and verse numbers on the printed page. Most editions accomplish this by removing them from the text itself and relegating them to the margins of the page. The main text in these editions is unbroken and uninterrupted at the beginning of chapters (which are noted only in the margin). The lack of chapter breaks within the text in these editions also serves to reinforce the visual impact created by the spaces and "paragraph" breaks on the page, which indicate the traditional Jewish parashah divisions.

These modern Jewish editions present Samuel, Kings, and Chronicles (as well as Ezra) as single books in their title pages, and make no indication inside the main text of their division into two parts (though it is noted in the upper and side margins). The text of Samuel II, for instance, follows Samuel I on the very same page with no special break at all in the flow of the text, and may even continue on the very same line of text.

Rabbinical Judaism believes that the Torah was transmitted side by side with an oral tradition. These rabbinic works, collectively known as "the oral law" [תורה שבעל פה], include the Mishnah, the Tosefta, the two Talmuds (Babylonian and Jerusalem), and the early Midrash compilations. They were intended to clarify the written Torah.