The Book of Proverbs is one of the books of the "Writings" of the Old Testament. It represents the most concise representation of Jewish wisdom literature contained within the biblical canon. Proverbs provides its readers with clear-cut teachings about how to achieve happiness through understanding one’s proper relation with God’s role in society. Its approach is best summarized in one of its most famous dicta: "The fear of the Lord is the beginning of wisdom, and knowledge of the Holy One is understanding." (9:10) The book teaches in a straightforward and uncomplicated manner that whoever does right will be blessed, and whoever does evil will suffer.

Traditionally ascribed to Solomon, Proverbs today is generally held to a later work combining several sources. While some insist that those sections specifically attributed to Solomon in the text were truly written by him, critical scholars believe the work's language and attitude make it likely that it was both written and compiled in the period after the Babylonian exile. 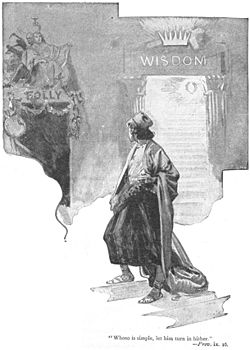 "Wisdom has built her house... 'Let all who are simple come in here!' she says to those who lack judgment."—Proverbs 9:1-4

The Book of Proverbs belongs to the group of Ḥokmah, or "Wisdom" books, in which Job and Ecclesiastes are also included. The following divisions of the book are indicated in the text:

These divisions, so various from each other in form and content, suggest that the book was formed by the combination of a number of booklets, rather than originally being a unitary work.

The original Hebrew title of the book of Proverbs is "Míshlê Shlomoh" ("Proverbs of Solomon"). The Greek and Latin vulgate translations of the title were "Proverbs" and "Proverbial," respectively, from which the English title of Proverbs is derived.

The attribution of the work to Solomon is due to the ascription in Proverbs 1:1: "The proverbs of Solomon the son of David, King of Israel." However, no commentator today believes that Solomon was the author of each separate proverb in the book—the book itself attributes two of its sections to other writers—and his authorship of any of them is doubted by most critical scholars.

It was often the custom to attribute a writing to the king or another person of prominence in order to honor him, or to give those writings more prestige. Solomon is portrayed in the Bible as well as in extra-biblical literature as a king of extensive and supreme wisdom. In 1 Kings 4:29-34, 3000 proverbs and over 1000 songs are said to have been written by him. People reportedly came from all over the world to hear the wisdom of Solomon. Among those who accept this view of Solomon, the general assumption is that he authored at least some of the Book of Proverbs, but that the book was not solely his work. One reason for this admission is that other names than Solomon's are linked to various sections of the book. There is also other evidence that several sources were combined into the current work creating elements of disunity that suggest more than one author even beyond those specifically mentioned.

The text itself contains at least eight specific instances where authorship is mentioned:

However, the ascription of any part of the book to Solomon is thought by critical scholars to be without valid foundation. In the first place, there is no trace in the book of the religious problems and conflicts of the pre-exilic period (before 587 B.C.E.). The prophets, from Amos to Ezekiel, are in deadly fear of foreign cults, and testify that Israel is largely given over to the worship of other gods than Yahweh and to idolatry. The polemic against such infidelity is the dominant note of the prophetic preaching down to the latter half of the sixth century. But in Proverbs there is not a word of all this. Monotheism is quietly taken for granted. There is no mention of priests or prophets, and the sacrificial ritual is almost completely ignored. Also, throughout the biblical literature till the time of Ezra the national interest is predominant. Here it is quite lacking—the name Israel does not even occur.

The fact that the religious and cultural atmosphere of the book is wholly different from that which characterizes Jewish thought down to the end of the fifth century leads most scholars to conclude that the work is post-exilic. 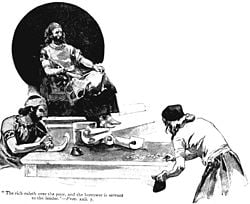 "The rich rule over the poor, and the borrower is servant to the lender."—Proverbs 22:7

The "wisdom" of the pre-Ezran Old Testament writings is shrewd common sense and general keen intelligence (2 Sam. 14; 1 Kings 3). Because it was controlled by worldly considerations it was looked on with disfavor by the prophets as not being in harmony with the word of God as they understood it (Jer. 8:9; Ezek. 7:26). In Proverbs, wisdom stands for the broadest and highest conception of life, and is identified with the law of God. Yet it is the utterance not of prophets but of sages, whose counsel is represented as the only sufficient guide of conduct (1-4, 12:17-21).

The sages do not employ the prophetic formula "Thus saith the Lord" or appeal to the law of Moses. They speak out of their own minds, not claiming divine inspiration, yet assuming the absolute authoritativeness of what they say—that is, they regard conscience as the final guide of life.

While the contents of the book are varied, in the parts of it dealing with simple, every-day matters, the prevailing tone is broadly religious: God is the ruler of the world, and wisdom is the expression (through human conscience) of His will. In one passage (8), wisdom is personified as a cosmic force, the nursling of God, standing by His side at the creation of the world (compare Job 28; Wisdom of Solomon 7). This conception, foreign to the pre-Ezran Old Testament thought, suggests the period when the Jews came under Greek influence.

The theology of Proverbs is the simplest form of theism. The individual man stands in direct relation with God, needing no man or angel to act as mediator. No supernatural being, except God, is mentioned. Salvation lies in conduct, which is determined by man's will.

Men are divided into two classes, the righteous and the wicked: the former are rewarded, the latter punished, by God. How one may pass from one class into the other is not said. Reward and punishment belong to the present life, and the conception of the underworld is the same as in the body of Old Testament writings. There is no reference to ethical immortality in which sinners are punished and the righteous are rewarded. Wickedness leads to premature death (5:5, 9:18); wisdom confers long life (3:16). 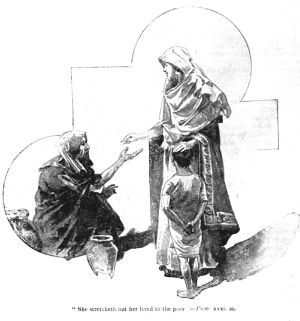 A wife of noble character who can find? She is worth far more than rubies. She opens her arms to the poor and extends her hands to the needy.—Proverbs 31:10-20

Doubtless the authors, who were pious men, observed the national sacrificial laws (25:8), but they lay no stress on them. They regard ethical conduct as the important thing.

The book contains no Messianic element. A description in 26: 10-15 is of the ideal king, who is controlled by the human law of right, not a Messiah per se. This attitude may point to a time when there was a lull in the general Messianic interest (about 250-200 B.C.E.), but it may also be accounted for by the supposition that the sages, concerned with the inculcation of a universal code of life, took little interest in the popular hope of a restoration of the national independence which the Messiah would bring.

Proverbs bears witness, especially in the first and the third division, to the existence of some sort of organized higher instruction at the time when it was composed. The frequent form of address, "my son," indicates the relation of a teacher to his pupils. There is no information regarding regular academies before the second century B.C.E., but it is probable that those that are known did not spring into existence without forerunners. The instruction in such schools would naturally be of the practical ethical sort that is found in Proverbs. The book has been always highly valued for the purity and elevation of its moral teaching.

Not only are justice and truthfulness everywhere enjoined, but revenge is forbidden (24:17), and kindness to enemies insisted on (25:21). The conception of family life is a high one: monogamy is taken for granted, children are to honor parents, and parents to be the guides of children. An honorable position is assigned to the wife and mother. Infidelity on the part of a married woman is denounced at length (5, 7), and the young man is repeatedly warned against the "strange woman," that is, the unchaste wife of another man.

There are many maxims relating to thrift and economy (6:1-11, 27:23-27, et al). Excess is denounced, and self-control and temperance enjoined. The motives urged for well-doing are well-being, success, and happiness. The ethical system is thus utilitarian, but the success presented as a goal, while sometimes merely material, rises at other times to the height of an ideal conception of a happy life (3, 8).

The Book of Proverbs is referred to as wisdom literature, along with the book of Job, Ecclesiastes and Song of Solomon, and several apocryphal books. However, many commentators have noted a marked contrast in its attitude from Job and Ecclesiastes in particular.

For Proverbs, the righteous man who practices wisdom and fears God will be blessed in the here and now: "The Lord does not let the righteous go hungry," it insists. "Blessings crown the head of the righteous, but violence overwhelms the mouth of the wicked." (Proverbs 10:3-6)

Ecclesiastes takes an almost opposite view: "In this meaningless life of mine I have seen both of these: a righteous man perishing in his righteousness, and a wicked man living long in his wickedness." (Ecc. 7:15) The Book of Job, meanwhile, deals at length with the paradox of a righteous man, Job, whom God has allowed to suffer horribly.

Proverbs, like the Psalms, admits no such gray areas. He who does well will be blessed, and he that does evil will be punished. It has thus provided a sure comfort for those struggling with ethical dilemmas, assuring them that God will bless them if they do what is right. On those occasions where this formula fails, readers can turn to Job and Ecclesiastes for the more nuanced view.