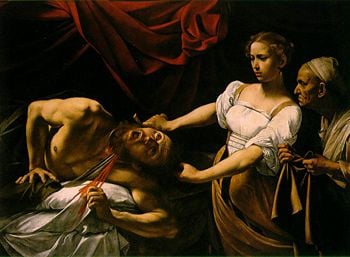 The Book of Judith is a deuterocanonical book, included in the Roman Catholic and Eastern Orthodox Bibles, but excluded by Jews and Protestants. However, it remains a popular and widely read work among the apocrypha of the Old Testament.

The story revolves around Judith, a daring and beautiful widow. During the final stages of an Assyrian siege which has convinced her city of Bethulia to surrender, she travels to the camp of the enemy general Holofernes and seductively ingratiates herself to him. Soon, as he lies in a drunken stupor, she decapitates him, then takes his head back to her grateful countrymen. The Assyrians are then routed, and Israel is saved. Though she is courted by many, Judith remains quietly unmarried for the rest of her life.

Although artfully constructed, the book contains numerous historical anachronisms and must thus be considered a work of pious fiction. It has inspired numerous works of art, music, and drama. 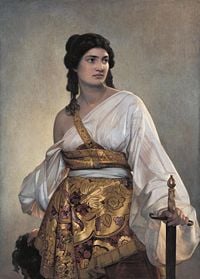 Judith, as portrayed by August Riedel

The name Judith (יְהוּדִית—Yehudit) is the feminine form of Judah. She resembles several other biblical women, most obviously Jael, the wife of Heber the Kenite (Judges 4:5), who lures the enemy commander Sisera to fall asleep in her tent, where she assassinates him. Judith may also be seen as a type of Delilah on God's side.

The Book of Judith's scenes are enlivened and given immediacy by their vivid setting in the midst of a battle in which Israel and Jerusalem are about to be overwhelmed by Assyria. Rather than a work of sacred history, however, it is best understood as a pious historical novel. The mighty ruler Nebuchadnezzar—the "Assyrian" ruler in the Book of Judith who reigned in Nineveh—was actually the ruler of the later Babylonian Empire, as every educated Jew knew perfectly well. Nor was his army ever driven back by the Israelites as the result of the assassination of his commander. The historical Nebuchadnezzar was entirely successful in his campaign to subjugate Judea. In fact, with regard to Nebuchadnezzar, the prophet Jeremiah argued against precisely the policy of resistance which the Book of Judith glorifies. For Jeremiah and later Judaism, the sin of Judah was already beyond forgiveness, and Nebuchadnezzar was God's agent of chastisement who must be supported, not rebelled against or resisted. According to the Jewish Encyclopedia the opening lines, "In the twelfth year of the reign of Nebuchadnezzar, who reigned over the Assyrians in Nineveh," is the ancient Hebrew equivalent of "once upon a time in the land of make believe."

The story's geographical setting in a city called "Bethulia," a possible pun on the Hebrew word for "virgin," is also believed by many to be fictional. However, some suggest that Behulia might actually be either Shechem or the village of Meselieh, both of which occupied a location north of Jerusalem and would have been of possible strategic significance to an invading army aimed at Jerusalem.

Scholars believe the book reflects the cultural literature of the Hasmonean dynasty, when stories of heroic opposition to Gentile kingdoms were popular. The book has a distinctly religious trend, and is calculated to inspire both patriotism and piety. The most likely date of the book is probably sometime in the later second century B.C.E.

The Book of Judith was almost certainly written in Hebrew. However the oldest versions of its actual text are Greek translations included in the Septuagint version of the Hebrew Bible. Although the book was later rejected by rabbinic authorities, it was recognized as canonical by Christians until the Protestant Reformation, when it was retained by Catholic and Orthodox Christians but excluded by Protestants. Even though the Book of Judith is not part of the official Jewish religious canon, it regained popularity among Jews in the medieval period and remains widely read today. 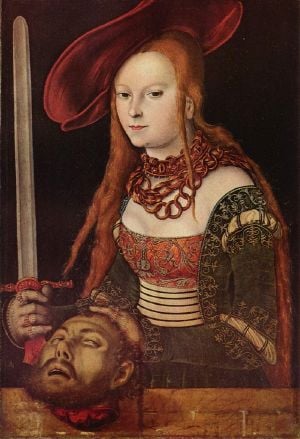 Judith as painted by Lucas Cranach.

Nebuchadnezzar has grown angry with the people of the Levant who resist his rule, and vows to destroy them. He assigns his military commander Holofernes to this task, and a great army sweeps down from Mesopotamia into Syria and Lebanon toward Israel. The nations in its path immediately surrender and beg for peace. The Israelites, however, fast and pray to God for deliverance. The town of Bethulia is particularly desperate, since it stands in the way of the mighty army's path to Jerusalem. (1-4)

Holoferenes is amazed that the Israelites have the courage to resist him. Achior, the leader of all the Ammonites, briefs him on Israel's sacred history and declares that Israel will be invincible unless it sins against God. "Who is God except Nebuchadnezzar?" Holefernes replies. He orders Achior bound and taken to Bethulia, where he can share the Israelites' fate. The Ammonite leader is treated with hospitality by the citizens of the city, who welcome him into their assembly.[1] Holefernes arrays his troops for battle, but the Edomites in his coalition convince him to lay siege to the city instead, by taking control of its water supply, which lies outside the city walls. After a little more than a month, the people of Bethulia are ready to surrender, but their mayor, Uzziah, convinces them to hold out for five more days. If God does not deliver them by the fortieth day of the siege, he vows to accede to their wishes and surrender to Holofernes' forces. (5-7)

It is only now that the lovely, pious widow Judith appears on the scene. She prophetically proclaims that to surrender to Holofernes' would be sin. "If we are captured, all Judea will be captured and our sanctuary will be plundered; and he (God) will exact of us the penalty for its desecration," she argues. Judith declares that she herself will become God's agent of deliverance. She prays desperately to God to allow her to use "deceitful words" to defeat the Assyrians. She then attires herself glamorously, receiving the praise of the people of Bethulia as she leaves through the city gate together with her maid. She is immediately arrested by an Assyrian patrol, but convinces them that she has useful information for Holofernes. She is consequently taken to him, amidst great excitement on account of her unrivaled beauty. (8-10)

Holofernes assures Judith that she will not be harmed if she is willing to serve his master, Nebuchadnezzar. She confirms the report of Achior the Ammonite regarding the Israelites' invincibility. However, she reports that the people of both Bethulia and Jerusalem have been so hard pressed by the siege that they are about to sin egregiously by consuming sacred food items dedicated to God. She explains that this very situation is what prompted her own decision to come over to the Assyrian side, rather than to share in the Israelites' now certain doom. She promises to act as Holofernes' agent to tell him when these sins have been committed, and thus when it is safe for him to attack. Holofernes agrees to the plan and marvels at Judith's wisdom, promising her rich rewards. He offers her a sumptuous meal, but she piously declines to eat the non-kosher food. She has brought her own supplies in a bag, however, and survives on this while she stays in the camp for three days, leaving each night to pray, supposedly for God's revelation as to the propitious time for Assyria to attack. On the fourth day, Holofernes determines that he must have his way sexually with the alluring Judith. She now accepts his offer to eat with him and "become like one of the the daughters of the Assyrians," reclining seductively before him at a lavish dinner. The overjoyed and lustful Holofernes becomes so aroused that he consumes a huge quantity of wine at dinner in anticipation of possessing Judith. (11-12)

When Holofernes' servants leave Holofernes and Judith alone to have some privacy, he immediately falls asleep in a drunken stupor. Seeing her opportunity, Judith takes Holofernes' sword from where it hangs above his bed. She then prays to God for strength and decapitates her enemy. Summoning her maid, they place Holofernes' head in Judith's food bag and make good their escape, a feat made easy by Judith's authorized nightly prayer vigils outside the camp. Returning to Bethulia, Judith produces Holofernes' head for all to see, to the great joy of the Israelites. Achior the Ammonite confirms the identity of the head and is so impressed by God's miraculous work through Judith that he accepts circumcision and becomes a Jew. The Assyrians, meanwhile, have discovered Judith's treachery and are thrown into disarray. Following Judith's advice, the men of Bethulia attack, mustering their fellow Israelites to drive the enemy back even beyond Damascus. Judith receives high honors and adulation; even Jerusalem's high priest Joakim comes to pay his respects. Judith then retires to her home and lives the rest of her life as a widow, despite many offers of marriage. She dies at the age of 105. (13-16)

Judith in the arts 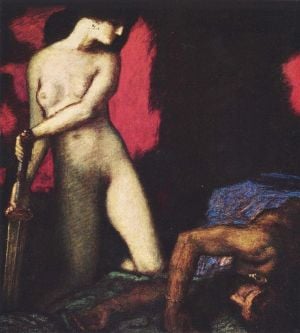 Portrayal of Judith by Franz von Stuck in 1927 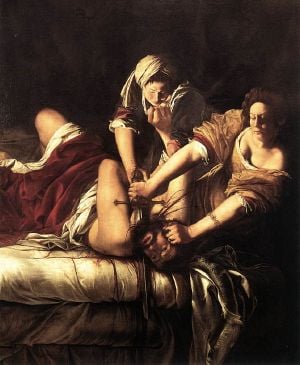 The dramatic story of Judith's assassination of Holofernes has inspired a great number of paintings, sculptures, musical pieces, and works of drama. In the Renaissance, Judith became an exemplum of the courage of local people against tyrannical rule from afar. The humanist writer Marko Marulić (1450-1524) reworked the Judith narrative in his Renaissance literary work, Judita. His inspiration came from the contemporary heroic struggle of the Croats against the Ottomans in Europe. Donatello's famous bronze statute, Judith and Holofernes, is thought to carry an implied allegorical subtext of the courage of the commune against tyranny.

In the Renaissance an interest developed in female heroines to match the traditional male types. Subjects combining sex and violence were also popular. Judith became the subject of a surprising number of old master prints, sometimes shown in the nude. Barthel Beham engraved three compositions of the subject, and others of the "Little Masters" did several more. The first reproductive print commissioned by Rubens was an engraving of his violent "large Judith," now in the Palazzo Barberini. Many modern paintings of Judith were also created.

In 1841 Friedrich Hebbel published his play Judith. However, biblical subjects on the stage were not allowed at this time, and the drama was not performed. British playwright Howard Barker examined the Judith story and its aftermath in the scene "The Unforeseen Consequences of a Patriotic Act," as part of his collection of vignettes, The Possibilities. He later expanded the scene into a short play Judith. In 2007 Philippe Fénelon (French, born in 1952) composed Judith, an opera with one act, based on a booklet adaptated from the Friedrich Hebbel's drama, in German.