Donatello (Donato di Niccolò di Betto Bardi) (c. 1386 – December 13, 1466) was a famous early Renaissance Italian sculptor and artist from Florence. A pioneer in many aspects, he is known for his revival of several lost classical forms and especially for his work in bas-relief, the shallow relief sculpture that, in Donatello's case, incorporated significant fifteenth century developments in perspective and illusion.

Donatello worked with architect Filippo Brunelleschi and sculptors Lorenzo Ghiberti and Michelozzo, and was commissioned by Cosimo de' Medici who became his greatest patron. He worked primarily in Florence, Padua, and Rome, producing a great number of surviving works.

Donatello's sculptures are considered supreme expressions capturing the spirit of the era. His work exercised a potent influence upon the artists of the age, especially in the move toward naturalism and the rendering of human feelings. An primary example is his Crucifix for Santa Croce, portraying a very human Christ figure in a moment of the agony. His most famous work is the free-standing, sensual, bronze sculpture, David, for the court of Palazzo Medici. Other notable works are his St. Mark (1411-1413), St. George (1417), the equestrian, Gattamelata (1450), Mary Magdalene (1455), and Judith and Holofernes (1455-60).

He worked in wood, stone, and marble. His final sculptures had an unfinished quality to them, similar to those of Michelangelo, causing the the viewer to see the creation more internally rather than merely the external form.

Donatello never married, He died at 80 years old and was buried next to his patron, Cosimo de' Medici, in the Basilica of San Lorenzo. Donatello was the son of Niccolo di Betto Bardi, a member of the Florentine wool combers guild, and was born in Florence, most likely in 1386. He was educated in the house of the Martelli family, receiving his early artistic training in a goldsmith's workshop, and then worked briefly in the studio of Lorenzo Ghiberti.

While undertaking study and excavations with architect Filippo Brunelleschi in Rome (1404-1407), Donatello continued to make a living by working at goldsmith shops. Their Roman sojourn was decisive for the entire development of Italian art in the fifteenth century, for it was during this period that Brunelleschi undertook his important measurements of the Pantheon dome and of other Roman buildings. Brunelleschi's buildings and Donatello's sculptures are both considered supreme expressions of the spirit of this era in architecture and sculpture, and they both exercised a potent influence upon the painters of the age.

Statue of Habakkuk (popularly known as Zuccone) for the Giotto's Bell Tower, now in the Museo dell'Opera del Duomo of Florence.

Moving to Florence, Donatello assisted sculptor Lorenzo Ghiberti with the statues of prophets for the north door of the Battistero di San Giovanni. In 1409-1411, he executed the colossal seated figure of Saint John the Evangelist, which until 1588, occupied a niche of the old cathedral facade in Florence and is now placed in a dark chapel of the Basilica di Santa Maria del Fiore (the Duomo of Florence). This work marks a decisive step forward from late-Gothic art in the search for a greater sense of naturalism and the rendering of human feelings. The face, the shoulders and the bust are still idealized, while the hands and the drape over the legs are more realistic.

In 1411-1413, Donatello worked on a statue of St. Mark for the church of Orsanmichele. In 1417, he completed the St. George for the confraternity of the cuirass-makers. The elegant St. George and the Dragon relief on the statue's base, executed in schiacciato (similar to bas-relief but at times flatter or more crushed), is one of the first examples of central-point perspective in sculpture.

Between 1415 and 1426, Donatello created five statues for the campanile of Santa Maria del Fiore in Florence. These works are the Beardless Prophet; Bearded Prophet (both from 1415); the Sacrifice of Isaac (1421); Habbakuk (1423-1425); and Jeremiah (1423-1426); which follow the classical models for orators and are characterized by strong portrait details. From the late teens is the Pazzi Madonna relief (now in Berlin). In 1425, he executed the notable Crucifix for Santa Croce. This work portrays Christ in a moment of the agony, eyes and mouth partially opened, the body contracted in an ungraceful posture. From 1423 is the St. Louis of Toulouse, now in the museum of the Basilica di Santa Croce. 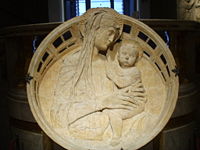 Between 1425-1427, Donatello collaborated with Michelozzo on the funerary monument of Antipope John XXIII for the Battistero in Florence, in which Donatello contributed the recumbent bronze figure of the deceased, under a shell. In 1427, he completed a marble panel for the funerary monument of Cardinal Rainaldo Brancacci at the church of Sant'Angelo a Nilo in Naples. In the same period, he executed the relief of the Feast of Herod and the statues of Faith and Hope for the Baptistery of Siena. 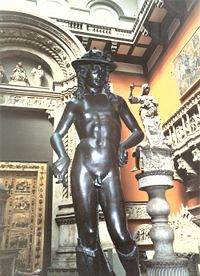 Donatello did not marry, choosing instead to live with other artists and his many young workshop assistants. According to some historians, Donatello made no secret of his homosexuality, and his behavior was tolerated by his friends.[1] Donatello's bronze life-sized David, which he produced for Cosimo de' Medici, was one of the most overtly homosexual works of its era. Its sensuous nudity is emphasized by the young David's calf-length ornamented leather boots and curly tresses.

Frequently, violent outbursts would result from Donatello's passionate entanglements. For example, when one of his assistants ran away, Donatello is said to have chased him as far as Ferrara with the intention of killing him.[2] However, little detail is known with certainty about his private life. No accusation against him has been found in the Florentine archives.[3]

At the time of its creation, Donatello's bronze David was the first known free-standing nude statue produced since ancient times. Conceived fully in the round, independent of any architectural surroundings, and largely representing an allegory of the civic virtues triumphing over brutality and irrationality, it is considered the first major work of Renaissance sculpture. Also from this period is the disquietingly small Love-Atys, housed in the Bargello.

When Donatello's patron, Cosimo, was exiled from Florence, Donatello went to Rome, remaining there until 1433. The two works that testify to his presence in this city, the Tomb of Giovanni Crivelli at Santa Maria in Aracoeli, and the Ciborium at St. Peter's Basilica, bear a strong stamp of classical influence. 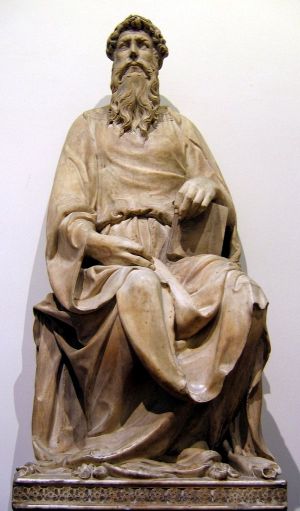 Donatello's return to Florence almost coincided with Cosimo's. In May of 1434, he signed a contract for the marble pulpit on the facade of the Prato Cathedral, his last project executed in collaboration with Michelozzo. This work, a passionate, pagan, rhythmically-conceived bacchanalian dance of half-nude putti (cherubic infants, often shown winged), was the forerunner of the great Cantoria, or singing tribune, at the Duomo in Florence, on which Donatello worked intermittently from 1433 to 1440 and was inspired by ancient sarcophagi and Byzantine ivory chests. In 1435, he executed the Annunciation for the Cavalcanti altar in Santa Croce, inspired by fourteenth century iconography, and in 1437-1443, he worked in the old sacristy of the Basilica di San Lorenzo di Firenze in Florence, on two doors and lunettes portraying saints, as well as eight stucco tondoes (circular bas-relief sculptures). From 1438 is the wooden statue of St. John the Evangelist for Santa Maria Gloriosa dei Frari in Venice. Around 1440, he executed a bust of a Young Man with a Cameo, the first example of a lay bust portrait since the classical era. 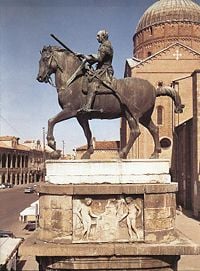 In 1443, Donatello was called to Padua by the heirs of the famous condottiero Erasmo da Narni, who had died that year. Completed in 1450 and placed in the square facing the Basilica of St. Anthony, his equestrian statue of Erasmo (better known as the Gattamelata, or "Honey-Cat") was the first example of such a monument since ancient times. (Other equestrian statues, from the fourteenth century, had not been executed in bronze and had been placed over tombs rather than erected independently in a public place). This work became the prototype for other equestrian monuments executed in Italy and Europe in the following centuries. 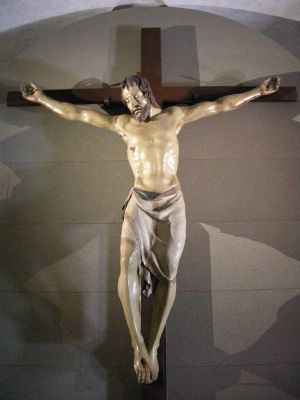 For the Basilica of St. Anthony, Donatello created the bronze Crucifix of 1444-7 and additional statues for the choir, including a Madonna with Child and six saints, constituting a Holy Conversation, which is no longer visible since the church's renovation of 1895. The Madonna with Child portrays the Child being displayed to the faithful, on a throne flanked by two sphinxes, allegorical figures of knowledge. On the throne's back is a relief of Adam and Eve. During this period (1446-50) Donatello also executed four extremely important reliefs with scenes from the life of St. Anthony for the high altar.

Donatello returned to Florence in 1453. Until 1456, he worked on a wooden Mary Magdalene, an unusually expressionistic work depicting the saint in her late, hermetic period and characterized by meagerness of body and a face marked by fatigue, pain, and intense asceticism. From 1455-1460, dates the Judith and Holofernes, begun for the Duomo di Siena but later acquired by the Medici. Until 1461, Donatello remained in Siena, where he created a St. John the Baptist, also for that city's Duomo, and models for its gates, now lost.

For his last commission in Florence, Donatello produced reliefs for the bronze pulpits in the church of San Lorenzo, with help from students Bartolomeo Bellano and Bertoldo di Giovanni. Donatello provided the general design and personally executed the Martyrdom of St. Lawrence and the Deposition from the Cross; he worked on the reliefs of Christ before Pilate and Christ before Caiphus, with Bellano. This work is characterized by an intense, free, indeed sketchy and suggestively unfinished—in Italian a non-finito—technique that heightens the dramatic effect of the scenes and emphasizes their spiritual intensity.

Donatello died in Florence in 1466 at the age of 80 and was buried in the Basilica of San Lorenzo, next to his patron, Cosimo de' Medici.