Leviticus is the third book of the Hebrew Bible. The English name is derived from the Latin Liber Leviticus and the Greek (το) Λευιτικόν. In Jewish writings it is customary to cite the book by its first word, Vayikra, "and He called." The book is mainly concerned with religious regulations, priestly ritual, and criminal law. It consists of two large sections, identified by scholars as the Priestly Code and the Holiness Code. Both of these are presented as being dictated by God to Moses while the Israelites were encamped at Mount Sinai. Despite the English title of the work, it is important to note that the book makes a strong distinction between the priesthood, who are identified as being descended from Aaron, and mere Levites, with whom it is less concerned.

Observant Jews still follow the laws contained in Leviticus, except for those that can no longer be observed because of the destruction of the Temple of Jerusalem as the only authorized place of sacrifice (see Deuteronomy). Christians generally consider much of Leviticus to be non-binding on them as members of the New Covenant initiated by Jesus. However, many of the moral and civil laws contained in Leviticus have become permanent parts of the Christian-based western ethical and legal tradition.

Leviticus is a source of two of the Bible's most famous sayings. One is often used as a negative summary of ancient Jewish tradition: "eye for eye, tooth for tooth." (Lev. 24:20) The other, ironically, is a saying popularized by Jesus and often thought of as the opposite of Old Testament law: "Love your neighbor as yourself" (Lev. 19:18). 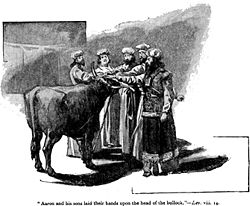 The guilt offering of Aaron and his sons.

In contrast to the other books of the Pentateuch, Leviticus contains very little in the way of narrating the story of the Israelites. The book is generally considered to consist of two large sections, both of which contain a number mitzvot, or commandments. The second part, Leviticus 17-26, is known as the Holiness Code. It places particular emphasis on holiness and that which is considered sacred. Although Exodus, Numbers, and Deuteronomy also deal with religious regulations, Leviticus focuses almost entirely on this subject and thus constitutes a major source of Jewish law.

The first part of Leviticus (chapters 1-16), together with Leviticus 27, constitutes the main portion of what scholars call the Priestly Code, which describes the details of rituals, and of worship, as well as details of ritual cleanliness and uncleanliness. It emphasizes the role of the Aaronic priesthood, comprised of "Aaron and his sons."[1] Within this section are laws concerning:

Narrative concerning Aaron and his sons 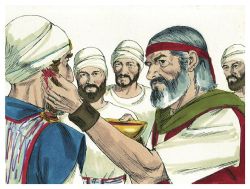 In Leviticus 8, Aaron and his sons are formally ordained. Moses ceremonially washes and dresses them, and then anoints Aaron as the high priest. After conducting a former guilt offering of a bull and a burnt offering of a ram, Moses anoints Aaron with sacrificial blood and then consecrates Aaron's sons by sprinkling them with blood and anointing oil. After this, Aaron and his sons eat a sacramental meal and remain in the the sacred tent for seven days.

On the eighth day, Aaron assumes his duties as high priest, carefully conducting various offerings. God signals his approval of Aaron's work by sending fire from heaven to consume the sacrifices he has offered (Lev. 9:24). However, when Aaron's sons Nadab and Abihu use "unauthorized fire" in attending the altar, they are immediately slain by God for this sin (Lev. 10:1). Aaron and his descendants are forbidden to tear their priestly garments during the mourning process.

Although conveyed in narrative fashion, the story of the consecration of Aaron and his sons also represents a detailed manual for the formal investiture of priests throughout the period of the Tabernacle and later Temple of Jerusalem. Although two of his sons sin and are immediately punished with death, in Leviticus, Aaron commits no sin as he does in Exodus in the episode of the Golden Calf and Numbers in the incident of him and Miriam criticizing Moses' marriage. 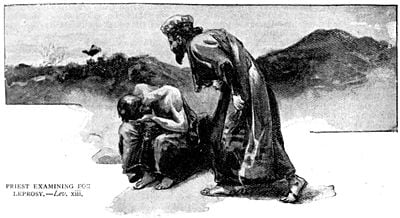 A priest examines a victim of skin disease.

Chapter 18:3-45 contains an address of God to the Israelites, setting forth the blessing that will flow from obedience and the curses that will result from rebellion to the Law. The speech closely resembles Deuteronomy 28 and often cited as evidence of the separate character of the Holiness Code. This section places particular emphasis on holiness, and the idea of the sacred versus the profane. The laws are less clearly categorized as in earlier chapters. Within this section are:

Although it comes at the end of the book, Leviticus 27 is regarded by many scholars as originally part of the Priestly Code. In its present form it appears as an appendix to the just-concluded Holiness Code. In addition to regulations concerning the proper discharging of religious vows, it contains an injunction that one-tenth of one's cattle and crops belong to God.

Did you know?
The book of Leviticus contains two of the Bible's most famous sayings: "eye for eye, tooth for tooth" and "Love your neighbor as yourself"

Orthodox Jews believe that this entire book is the word of God, dictated by God to Moses on Mount Sinai. In Talmudic literature, there is evidence that Leviticus was the first book of the Bible taught in the early rabbinic system. Although the sacrifices decreed in Leviticus were suspended after the destruction of the Temple of Jerusalem in 70 C.E., other Levitical laws are considered still valid. Indeed, rabbinical tradition in some ways goes beyond these laws. Talmudic debates often centered on how exactly to interpret and apply the various regulations of Leviticus and other books of the Torah.

Reform and secular Jews generally take the view that the Levitical laws are no longer binding for the most part.

Christians believe that Leviticus is the word of God, but generally hold that most of the non-ethical laws of the Hebrew Bible become obsolete as a result of the New Covenant initiated by Jesus. Sacrifices became unnecessary because Jesus himself brings atonement to believers through his death and resurrection.[2] Saint Paul's letters deal in detail with the need for Christians to realize that only faith in Jesus, and not obedience to the Jewish laws, brings salvation.

As far as the dietary laws are concerned, some cite 1 Corinthians 10:23-26—in which Paul directs followers to "eat anything sold in the meat market without raising questions of conscience"—as exempting them from following the dietary laws set forth in Leviticus.[3] In addition, in Acts 10, God directs Saint Peter to "kill and eat" ritually unclean animals, declaring, "Do not call anything impure that God has made clean."

According to the documentary hypothesis, much of Leviticus is identified as originating from the priestly source, "P," which also runs through parts of several other books of the Torah. Strongly supportive of the Aaronic priesthood, Leviticus is nevertheless said to consist of several layers of accretion from earlier collections of laws. The Holiness Code is regarded as an independent document later combined with other sections into Leviticus as we have it today.

The priestly source is envisioned as a rival version of the stories contained within JE, which in turn is a combination of two earlier sources, J and E. P is more concerned with religious law and ritual than either J or E. It is also generally more uplifting of the role of Aaron, while E—thought by some to have originated from the non-Aaronic priesthood at Shiloh—is overtly critical of Aaron. The Holiness Code is seen as being the law code that the priestly source presented as being dictated to Moses at Sinai, in place of the Covenant Code preserved in Exodus. On top of this, over time, different writers, of varying levels of narrative competence, ranging from repetitive tedium to case law, inserted various laws, some from earlier independent collections.

Chiastic structure is a literary structure used most notably in the Torah. The term is derived from the letter Chi, a Greek letter that is shaped like an X. The structure in Exodus/Leviticus comprises concepts or ideas in an order ABC…CBA so that the first concept that comes up is also the last, the second is the second to last, and so on.

The ABC…CBA chiastic structure is used in many places in the Torah, including Leviticus. This kind of chiastic structure is used to give emphasis to the central concept—"C." A notable example is the chiastic structure running from the middle of the Book of Exodus through the end of the Book of Leviticus. The structure begins with the covenant made between God and the Jewish People at Mount Sinai and ends with the admonition from God to the Jews if they will not keep this agreement. The main ideas are in the middle of Leviticus, from chapter 11 through chapter 20. Those chapters deal with the holiness of the Tabernacle and the holiness of the Jewish homeland in general.

The chiastic structure points the reader to the central idea: holiness. The idea behind the structure is that if the Jews keep the covenant and all the laws around the central concept, they will be blessed with a sense of holiness in their Tabernacle and in their land in general.