The term "Minor Prophets" refers to the reported authors of the twelve short prophetic texts included within the Hebrew Bible (Tanakh) as well as the Christian Old Testament. While the title places those books in contrast to the major prophets (Isaiah, Jeremiah, Ezekiel, and (in some Christian Bibles) Daniel), it should not be seen as a denigration of the former texts, as the term simply refers to the book's respective lengths.

The Minor Prophets, whose exhortations were recorded on a single scroll in the classical Hebrew (and only separated when the text came to be translated), run the gamut of Israelite/Jewish history—from the Assyrian period to the Persian. In doing so, they address strikingly varied audiences, from broken-hearted exiles to hopeful builders of a new temple. In spite of this, they consistently stressed a single, primary thesis: that they were God's chosen people, that it behooved them to behave accordingly, and that, in the end, history would vindicate the faithful. In this way (and in spite of their varied historical perspectives), all of the twelve, in their hopeful proclamations and baneful exhortations, were conditioned by this singular perspective. As Bandstra notes, "the books taken as a whole address the big issues of prophecy; namely, Israel's devotion to Yahweh, the responsibility of foreign nations to respect God's people, and the expectation that God will act in the future to vindicate his people and punish wickedness" (378).

The collection of twelve texts known as the Minor Prophets was thought to have assumed its unitary form sometime in the first century B.C.E.,[1] although first extant mention of the text together is found in the Wisdom of Jesus ben Sirach (second century B.C.E.). The ordering of the twelve books was thought to be an early attempt at a chronological organization of the works (one with which modern textual scholarship tends to dispute). Modern scholars tend to order the books as follows: Amos, Hosea, Micah, Zephaniah, Nahum, Habakkuk, Obadiah, Haggai, Zecheriah, Malachi, Joel, Jonah.[2] 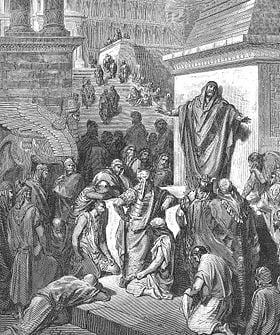 Jonah preaching to the Ninevites, by Gustave Doré.

The Septuagint (Greek translation of the Tanakh) has a slightly different order, beginning with Hosea, Amos, Micah, Joel, Obadiah, Jonah, with the remainder as above. Their ordering scheme also places the books of the "Minor Prophets" before (instead of after) the "Major prophets."

Recent biblical scholarship, following the original Hebrew, has focused on reading the "Book of the Twelve" as a unity—both in terms of content and editorial style.[28] Further, many of these studies, using the archaeological finds from Qumran (and other Middle Eastern excavations), are attempting to develop these interpretations using the most historically relevant source materials. Some of these trends are elegantly summarized by Russell Fuller: