The Epistle of Jude is a book in the New Testament of the Christian Bible. Considered one of the "general epistles" because it is addressed to no particular church or person, it is a brief book of only a single chapter with 25 verses. The putative author, Jude, identifies himself as the "brother of James"—meaning either James the brother of Jesus (mentioned in Mark 6:3 and the Book of Acts) or in Catholic tradition "James the Less," making Jude the same person identified by Matthew 10:3 and Mark 3:18 as the apostle Thaddaeus. However, modern scholarship tends to doubt that the letter could have been written by either of these persons, seeing it as originating from either late first or early second century C.E.

The letter is particularly concerned with a heretical teaching which held that sexual immorality was permissible under the doctrine of Christian freedom from the Jewish law. Some see it as also combating a form of Gnosticism which venerated other mediators between man and God besides Jesus Christ. Its apostolic origins were disputed by some authorities in the early church but, it was accepted as canonical by the mid-fourth century C.E.

The letter opens with a salutation identifying the writer as Jude, the brother of James. He makes his concern immediately plain. Certain men have "secretly slipped in among you." Jude accuses these teachers of twisting "the grace of our God into a license for immorality" and also of denying Jesus Christ as "our only Sovereign and Lord." The first charge is fairly easy to understand, while the second is not further clarified. Some scholars suggest a type of Gnosticism which emphasized angels and other spiritual powers as intermediaries between humans and God.

Regarding the charge of sexual immorality, a number of Christians interpreted Paul's teaching on freedom from the Jewish law to mean that they were free from even the most basic Mosaic commandments, such as the law against adultery and fornication. This heresy, called antinomianism, was also known in Saint Paul's day, for he argued against it in I Corinthinans 5. The author next makes an analogy between those who committed sexual sin at Sodom and Gomorrah and the "the angels who did not keep their positions"—an apparent reference to events described in the apocryphal Book of Enoch, which was widely read by both Jews and Christians at the time. He accuses the heretics of polluting their own bodies, rejecting authority, and "slandering celestial beings." He mentions the archangel Michael, who is referred to nowhere else in the canonical scriptures except the Book of Revelation. The reference to a struggle between Michael and Satan over the body of Moses appears to be derived from the non-canonical book known as the Assumption of Moses. "Woe to them!" he curses, for these heretics have followed the way of Cain, resembling prophet-for-hire Balaam and the rebellious Korah, who challenged the priestly authority of Aaron.

These men, perhaps prophets or preachers of an antinomian Gnostic sect, have apparently gained some authority in the church, for the author calls them "shepherds." He suggests they should be excluded from the church's "love feasts," the eucharistic celebrations which in the early church were also festive meals. In condemning the men, Jude now quotes directly from the Book of Enoch, declaring that "the Lord is coming with myriads of his holy ones to execute judgment." He reminds his readers of what "the apostles of our Lord Jesus Christ" had taught earlier—that "there should be mockers in the last time, who would walk after their own ungodly lusts." He concludes with the hope that true Christians would "keep yourselves in God's love" and reach out to those who may be led astray—some by means of compassion, but some "with fear." He closes with a salute to "him that is able to keep you from falling, and to present you faultless before the presence of His glory with exceeding joy." 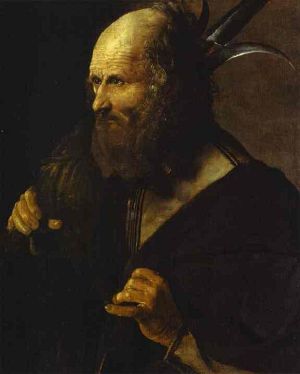 Jude the apostle, the author the Epistle of Jude in Catholic tradition

The epistle identifies itself as being written by "Jude, a servant of Jesus Christ and a brother of James." If this is James the Just this would make Jude the same person as Jesus' own brother or half brother Judah, mentioned in Mark 6:3.[1] However, Catholic tradition holds that the author of Jude is not this Judah, but the "Judah Jacobi" of Luke 6:16 and Acts 1:13—also called Thaddeus (Matthew 10:3: Mark 3:18).

Though it is held as canonical by all Christian churches, many scholars consider the letter a pseudonymous work. Some believe it to have been written between the end of the first century and the first quarter of the second century C.E., arguing from the references to the apostles (1:17-18), tradition (1:3), the book's competent Greek style, and the apparent opposition to a Gnostic form of antinomianism. Others, using similar data, date it between 66 to 90.[2] Still others hold to the traditional view that it was written by Jude, and that the heresy against which it fights is not the Gnosticism of the late first and early second century, but an earlier form of antinomianism that may have shared with later Gnosticism a concern with angelology.

By the end of the second century, Jude was widely accepted as canonical. [3] Source authorities Clement of Rome and Tertullian, as well as the list known as the Muratorian fragment, considered the letter as scripture. Its authorship was called into question by Origen, however, who spoke of doubts held by some—although he himself accepted it as authentic. The fourth century church historian Eusebius of Caesarea classified it with the "disputed writings." The letter was eventually accepted by the influential Church Father Athanasius of Alexandria—whose list of canonical works ultimately became authoritative—and by the synods of Laodicea (c. 363) and Carthage (397). Doubts regarding Jude's authenticity were revived at the time of the Protestant Reformation.

The debate has continued over the author's identity as the apostle, the brother of Jesus, both, or neither. Some scholars have argued that since the author refers to other earlier teachers as apostles (apparently not including himself) he cannot be identified with the Jude who is listed as one of the Twelve (Luke 6:16; Acts 1:13; cf John 14:22).

The Epistle of Jude is a brief book of only a single chapter with 25 verses. It was composed as an encyclical letter—that is, one not directed to the members of one church in particular, but intended rather to be circulated and read in all churches.

The wording and syntax of this epistle in its original Greek demonstrates that the author was capable and fluent. Its style is combative, impassioned, and urgent. The epithets against the evildoers contained in this writing are considered to be some of the strongest found in the New Testament.

The epistle concludes with a doxology (praise of God), which is considered to be one of the highest in quality contained in the Bible.

The fact that the Epistle of Jude is notably similar to Second Epistle of Peter indicates the possibility that the writing of one of the epistles was influenced by the content of the other. Because this epistle is much shorter than 2 Peter, and due to various stylistic details, the scholarly consensus is that Jude was the source for the similar passages of 2 Peter.