The Epistle to Philemon is a book of the New Testament in the Christian Bible. Philemon is now generally regarded as one of the undisputed works of Saint Paul, although it was once questioned by some. It is the shortest of Paul's extant letters, consisting of only 335 words in the original Greek text, and 25 verses in modern English translations.

The letter was written by Paul to a prominent Christian, Philemon, to intercede on behalf of a runaway slave, Onesimus, who—like Philemon hismelf—had become a Christian under Paul's guidance. Paul sends Onisemus back to Philemon and asks the slave-owner to be generous toward him, apparently hoping that Onisemus will be returned to Paul to assist him. It is not clear whether Paul also expects that Philemon will give Onesimus his freedom.

Estimates for the letters date range from the mid 50s early 60s C.E. The later date applies if he wrote it from Rome, the earlier date if he wrote an earlier place of imprisonment such as Caesaria or possibly Ephesus. Though short, the letter provides several interesting insights into the character of both Paul and the Christian church of his time.

Paul, who is apparently in prison (probably in either Rome or Ephesus), writes with his assistant Timothy to a fellow Christian, Philemon, and two of his associates, Archippus and Apphia, the latter of whom is traditionally believed to be Philemon's wife. Philemon is identified as a leader of the Christian community in his city, possibly Colossae,[1] for the church congregates in his house. Paul praises Philemon's generosity, which he says is a source of joy for him, because Philemon "has refreshed the hearts of the saints."

Paul writes on behalf of Onesimus, Philemon's slave. Onesimus is described as having been "separated" from Philemon, once having been "useless" to him (a pun on Onesimus's name, which means "useful"), and having done him wrong. The dominant scholarly consensus is that Onesimus is a runaway slave: a fugitivus. Apparently Onesimus has become a Christian under Paul's tutelage after fleeing from Philemon's household, for Paul states that he "became my son while I was in chains." Paul now sends him back to face his aggrieved master, and strives in his letter to effect reconciliation between these two "brothers." It is not entirely clear how Onesimus came to be with Paul. Various suggestions have been given: 1) Onesimus being imprisoned with Paul; 2) Onesimus being brought to Paul by others; 3) Onesimus deliberately seeking Paul out, as a friend of his master's.

Paul's letter is cryptic. He tactfully addresses Philemon, speaking of Philemon's Christian compassion. However, at the same time, Paul reminds Philemon of Paul's authority over him, for Philemon himself, like Onesimus, is Paul's spiritual son. Thus, Philemon owes Paul a spiritual debt, and Paul even goes so far as to suggest that "in Christ I could be bold and order you to do what you ought to do, yet I appeal to you on the basis of love" (1:8-9). He also points out that Onesimus' conversion has brought about a new state of affairs. And so Onesimus is returned "no longer as a slave but more than a slave, a beloved brother (vs. 16)." Paul expresses a deep affection for Onesimus, "who is my very heart," and implies that it is Philemon himself who should have been assisting Paul during this time.

Paul does not say exactly what he wants Philemon to do. Is Onesimus simply to be forgiven, or freed? Is Onesimus still Philemon's slave as well as his Christian brother, or does his position of "brother" supplant that of slave? In other letters, Paul urges slaves to be obedient to their masters, but here he seems to imply a hope that Philemon will be generous, perhaps by freeing Onesimus, and almost certainly by sending him back to Paul as a servant to assist the Apostle in prison.

In any case, Paul asks Philemon directly to welcome Onesimus "as you would welcome me" and to charge any harm or debts done by his absence to Paul's account. "I will pay it back," Paul promises, adding: "not to mention that you owe me your very self." Paul also expresses hope that he himself may be freed from prison and ask Philemon to prepare a guest room for him. Still not saying exactly what he expects regarding Onesimus, he concludes that he is "confident of your obedience." He closes with a blessing and greetings from his "fellow workers," among whom are mentioned both Mark and Luke, the putative authors of the Gospels that bear their names. 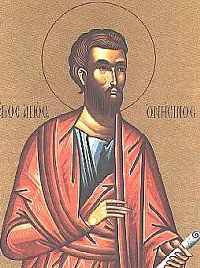 It is uncertain what happened to Onesimus after the letter, but tradition holds that Philemon indeed accepted Onesimus as a brother and freed him of slavery. In Colossians 4—if indeed the letter is authentically Pauline—Paul sends Tychicus and Onisemus, "a dear brother, a faithful minister, and fellow servant in the Lord," with news for the church at Colossae. Onesimus has even been suggested as a candidate for being the author of the Epistle to the Ephesians, which many scholars believe to have been written by someone other than Paul who was very familiar with his thought.

Ignatius of Antioch mentions an Onesimus as Bishop of Ephesus in the early second century, and some commentators, including a Roman martyrology, believe this Onesimus to be the same one described in Paul's letter. During the reign of Emperor Domitian and the persecution of Trajan, this Onesimus was imprisoned in Rome and martyred.

Onesimus is regarded as a saint by several Christian churches, including the Roman Catholic Church, the Eastern Orthodox Church and the Lutheran Church - Missouri Synod. He is commemorated on February 15 (Gregorian calendar) and February 28, (Julian calendar).

Philemon, who is also a saint, is listed in the fourth century by Dorotheus of Tyre as Bishop of Gaza. However, Catholic tradition holds that he and his wife Apphia were stoned to death while still at Colossae by an anti-Christian mob.[2]

While the Epistle to Philemon has been of only marginal interest in Christian theology and ethics, it gives a fascinating and intimate glimpse both into the personality of the Apostle Paul and the character of Christianity during the final years of Paul's ministry. Paul's referring to Onesimus as "my very heart," is particularly intriguing, although it is impossible to know the particulars which caused Paul to use such a strong term of endearment for him.

Martin Luther insisted that the letter upheld the social status quo: Paul did nothing to change Onesimus' legal position as a slave, and he complied with the law in returning him. However, it is clear that Paul hopes for Philemon to forgive Onesimus, and possibly to free him. The letter was a cause of debate during the British and later American struggles over the abolition of slavery. Both sides cited interpretations of Philemon for support. However, without Philemon, Paul's writing would certainly be more strongly weighted on the side of slavery.

The letter also shows that in this time, Christians did not meet in "churches" as we understand the term today, but in the homes of private persons such as Philemon, who owned a house that could accommodate such meetings, not not mention being wealthy enough to own slaves. The letter further shows that although Paul describes himself as a prisoner, he is far from alone. Indeed he seems to have been under some type of house arrest, not in an actual prison, and his "chains" may be figurative rather than literal. The mention of both Mark and Luke is also significant, for such references apparently enabled these personages to be identified by tradition as the writers of the Gospels attributed to them. Neither of these works in their original form bore an author's name.