Hagfish is the common name for the marine craniates (animals with skulls) of the class (or subphylum) Myxini, characterized by a scaleless, eel-like body that lacks both paired fins and vertebrae, but does have a cranium. Hagfish are the only animals that have a skull but not a vertebral column. Despite their lack of vertebrae, the hagfish have traditionally been classified among the vertebrates. This traditional classification is currently under dispute.

Although hagfish have an ancient history, possibly tracing back 300 million years ago, to the Carboniferous, there remain today living species of hagfish. These animals, which are characterized by degenerate eyes, barbels present around the mouth, and teeth only on the tongue, are found in marine environments and are scavengers that eat primarily the insides of dying or dead fish and invertebrates. They are unique in being the only "vertebrate" in which the body fluids are isosmotic (having the same osmotic pressure) with seawater (Nelson 1994). Although hagfish are sometimes called "slime eels," they are not eels at all, which are part of the bony fish.

The unusual feeding habits and slime-producing capabilities of hagfish have led members of the scientific and popular media to dub the hagfish as the most "disgusting" of all sea creatures (URI 2002; Ressem 2003; Frank 2004). Nonetheless, they play an important ecological role and for humans are of value for both commerce and research. In food chains, hagfish are consumed by seabirds, pinnipeds (seals and walruses), and crustaceans such as lobsters and crabs. In some areas of the world, they are consumed by people, being important commercially in Korea for this reason. They are used also in the study of tumors (Lee 2002) and for investigating chordate relationships through genetic analyses. Scientists are exploring possible practical applications for the hagfish slime (Vowles 2007). Finally, their mysterious and unusual behaviors and forms, and their connection to an ancient past, add greatly to the wonder of nature. 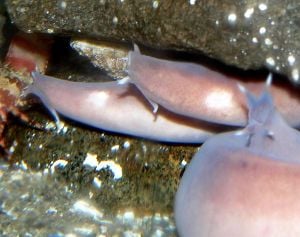 A group of Pacific hagfish.

The hagfish family, Myxinidae, is the only family in the order Myxiniformes (also known as Hyperotreti), which itself is the only order in the class Myxini. Thus, hagfish is variously used for any of the three taxonomic levels (ITIS 2003; Nelson 1994).

Hagfish are jawless and generally classified with the lampreys into the superclass Agnatha (jawless vertebrates) within the subphylum Vertebrata. However, hagfish actually lack vertebrae. For this reason, they sometimes are separated from the vertebrates and not even considered to be fish. Janvier (1981) and a number of others put hagfish in a separate subphylum Myxini, which along with the subphylum Vertebrata comprises the taxon Craniata, recognizing the common possession of a cranium (Janvier 1981). Others, however, place Vertebrata and Craniata as synonyms at the same level of classification, and thereby retain hagfish (Myxini) as members of the superclass Agnatha within the vertebrates (Nelson 1994). The other living member of Agnatha, the lamprey, has primitive vertebrae made of cartilage.

As members of Agnatha (Greek, "no jaws"), hagfish are characterized by the absence of jaws derived from gill arches (bone or cartilage supporting the gills), although they do have a biting apparatus that is not considered to have been derived from gill arches (Nelson 1994). Other common characteristics of Agnatha include the absence of paired fins, absence of pelvic fins, the presence of a notochord both in larvae and adults, and seven or more paired gill pouches. In addition, the gills open to the surface through pores rather than slits, and the gill arch skeleton is fused with neurocranium (the portion of the skull the protects the brain) (Nelson 1994).

Despite their name, there is some debate about whether hagfish are strictly fish, since they belong to a much more primitive lineage than any other group that is commonly defined as fish (Chondrichthyes and Osteichthyes), and because of the lack of a vertebrae commonly associated with the definition of fish. However, many authors do place hagfish as a primitive fish.

Drawing of a New Zealand hagfish.

Extant hagfish are placed in the family Myxinidae within the order Myxiniformes (Hyperotreti) and subphylum or class Myxini.

Members of the order Myxiniformes are characterized by one semicircular canal, absence of eye musculature, a single olfactory capsule with few folds in the sensory epithelium, no bone, and one to 16 pairs of external gill openings (Nelson 1994).

Members of the family Myxinidae are characterized by the lack of a dorsal fin, barbels present around the mouth, degenerate eyes, teeth only on the tongue, no metamorphosis, and ovaries and testes in the same individual but only one functional gonad (Nelson 1994). Note that many of these features differ from the other agnathan, lampreys, which have one or two dorsal fins, well-developed eyes, absence of barbels, separate sexes, a larval stage that undergoes radical metamorphosis, and teeth both on the oral disc and tongue (Nelson 1994).

Hagfish have a scaleless, elongated, eel-like body without paired fins. The extant hagfish average about half a meter (18 inches) long. The largest known species is Eptatretus goliath with a specimen recorded at 127 centimeters, while Myxine kuoi and Myxine pequenoi seem to reach no more than 18 centimeters.

Extant hagfish have paddle-like tails, cartilaginous skulls, and tooth-like structures composed of keratin. Colors range from pink to blue-gray depending on the species, and may include black or white spots. Eyes may be vestigial or absent. Hagfish have no true fins and have six barbels around the mouth and a single nostril. Instead of vertically articulating jaws like Gnathostomata (vertebrates with jaws), they have a pair of horizontally moving structures with tooth-like projections for pulling off food.

The circulatory systems of the extant hagfish have both closed and open blood vessels, with a heart system that is more primitive than that of vertebrates, bearing some resemblance to that of some worms. This system comprises a "brachial heart," which functions as the main pump, and three types of accessory hearts: The "portal" heart(s), which carry blood from intestines to liver; the "cardinal" heart(s), which move blood from the head to the body; and the "caudal" heart(s), which pump blood from the trunk and kidneys to the body. None of these hearts are innervated, so their function is probably modulated, if at all, by hormones.

Extant hagfish are long, vermiform (worm-like), and can exude copious quantities of a sticky slime or mucus (from which the typical species Myxine glutinosa was named). There are from 70 to 200 slime glands found in each of two ventrolateral lines from head to tail (Nelson 1994). The slime glands contain both mucous cells and thread cells, with the thread from the thread cells probably adding tensile strength to the slime (Nelson 1994). Indeed, the mucus excreted by hagfish is unique in that it includes strong, threadlike fibers similar to spider silk, causing the slime to be fiber-reinforced. No other slime secretion known is reinforced with fibers in the same manner as hagfish slime. The fibers are about as fine as spider silk (averaging two micrometers), but can be 12 centimeters long. When the coiled fibers leave the gland, they unravel quickly to their full length without tangling.

When captured and held by the tail, hagfish escape by secreting the fibrous slime, which turns into a thick and sticky gel when combined with water. They clean off the slime by tying themselves in an overhand knot, which works its way from the head to the tail of the animal, scraping off the slime as it goes. Some authorities conjecture that this singular knotting behavior may assist them in extricating themselves from the jaws of predatory fish. The "sliming" also seems to act as a distraction to predators, and free-swimming hagfish are seen to "slime" when agitated and will later clear the mucus off by way of the same traveling-knot behavior.

The slime appears to be particularly effective at clogging gills of fish and thus it is speculated that sliming may be an effective defense mechanism against fish, which are not among the main hagfish predators (Lim et al. 2006).

An adult hagfish can secrete enough slime to turn a large bucket of water into gel in a matter of minutes.

Hagfish tend to burrow under rocks or into mud, in highly saline waters, and away from bright light (Lee 2002). They are mostly found either near the mouths of rivers or at depths of 25 or more meters, with Myxiine circifrons found at more than 1000 meters below the ocean surface (Lee 2002).

Hagfish typically are scavengers, entering decaying and dead fish and invertebrates (including (polychaete marine worms and shrimp), feeding on the insides. Living organisms also are consumed. While having no ability to enter through skin, they often enter through natural openings such as the mouth, gills, or anus and consume their prey from the inside out. They can be a great nuisance to fishermen, as they are known to infiltrate and devour a catch before it can be pulled to the surface.

Like leeches, they have a sluggish metabolism and can survive months between feedings.

Very little is known about hagfish reproduction. In some species, the sex ratio can be as high as 100 to 1 in favor of females. In other species, individual hagfish that are hermaphroditic are not uncommon. These individuals have both ovaries and testes, but the female gonads remain non-functional until the individual has reached a particular stage in the hagfish lifecycle. Females typically lay 20 to 30 yolky eggs that tend to aggregate due to having Velcro-like tufts at either end.

Hagfish do not have a larval stage, in contrast to lampreys, which have a long larval phase.

Hagfish appear to have branched off from the chordates before the vertebral column appeared (Lee 2002). A single fossil of hagfish shows that there has been little evolutionary change in the last 300 million years (Marshall 2001). There have been claims that the hagfish eye is significant to the evolution of more complex eyes (UQ 2003).

There has been long discussion in scientific literature about the hagfish being classified as vertebrates versus invertebrates. Given their classification as Agnatha, Hagfish are seen as an elementary vertebrate in between Prevertebrate and Gnathostome. They tend to be classified either under the subphylum Vertebrata or as an invertebrate within subphylum Craniata.

Hagfish are consumed in some regions of the world, being particularly important commercially in Korea (Lee 2002). They also are made into leather items (Lee 2002).

Hagfish also are important in scientific research. They are useful in the study of tumors (Lee 2002), and genetic analysis investigating the relationships among chordates. Research is being done regarding potential uses for their slime or a similar synthetic gel including the fibers. Some possibilities include new biodegradable polymers, space-filling gels, or a means of stopping blood flow in accident victims and surgery patients (Vowles 2007).