Crustaceans (subphylum Crustacea) comprise the group of arthropods (phylum Arthropoda) that includes the familiar crabs, lobsters, shrimps, barnacles, copepods, krill, water fleas, and crayfish. Crustaceans are characterized by having branched (biramous) appendages, an exoskeleton made up of chitin and calcium, two pairs of antennae extending in front of the mouth, and paired appendages that act like jaws, with three pairs of biting mouthparts. They share with other arthropods the characteristic segmented body, a pair of jointed appendages on each segment, and a hard exoskeleton that must be periodically shed for growth.

Crustacea is the only subphylum of arthropoda to contain mostly aquatic species (Towle 1989), and most of these species, such as shrimps and barnacles, are marine organisms. Indeed, crustacea is the largest group of marine arthropods. However, Crustacea also includes many freshwater forms, such as crayfish; and also terrestrial forms, including sand fleas, land crabs, woodlice, and sow bugs, which generally need humid environments.

Crustaceans offer important economic, ecological, and aesthetic values and also can be appreciated from the perspective of bi-level functionality. Some larger crustaceans, including shrimp, lobsters, and crabs, are a major food commodity, while smaller crustaceans in their own way are integral to many food webs. Examples include krill and copepods, which can make up a considerable portion of plankton, consuming phytoplankton and being consumed by whales and fish. In playing their roles in the food chain, krill and copepods exemplify the common bi-level functionality of living systems: In this case the krill and copepods in pursuing their own needs serve also the higher order function of collecting and concentrating the marine nutrients, which makes these now available to whales and fish. Some crustaceans are detrivores, consuming dead organisms and recycling the nutrients. Crustaceans also can provide joy to humans in terms of their diverse colors and forms, and even their taste and texture when prepared as food.

There are more than 50,000 described species of crustaceans. The majority of these are motile, moving about independently, although a few taxa are parasitic and live attached to their hosts (including sea lice, fish lice, whale lice, tongue worms, and Cymothoa exigua), and adult barnacles live a sessile life—they are attached head-first to the substrate and cannot move independently.

Crustacea is sometimes considered a class or superclass rather than a subphylum. The scientific study of crustaceans is known as carcinology. Other names for carcinology are malacostracology, crustaceology, and crustalogy, and a scientist who works in carcinology is a carcinologist, crustaceologist, or crustalogist.

Crustaceans have three distinct body parts: Head, thorax, and abdomen (or pleon), although the head and thorax may fuse to form a cephalothorax. The head bears two pairs of antennae, one pair of compound eyes and three pairs of mouthparts. The thorax and pleon bear a number of lateral appendages, including the gills, and the tail ends with a telson (last division of the body of a crustacean, but not a true segment). 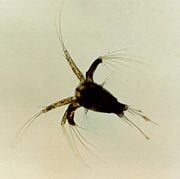 The nauplius(larva) of a shrimp, an aquatic crustacean.

Despite their diversity of forms as adults, crustaceans share the special larval form known as the nauplius. In common with other arthropods, crustaceans grow larger through the process of ecdysis in which they periodically shed their stiff exoskeleton and replace it with a larger one. Various parts of the exoskeleton may be fused together; this is particularly noticeable in the carapace, the thick dorsal shield seen on many crustaceans. Crustacean appendages are typically biramous, meaning they are divided into two parts; this includes the second pair of antennae, but not the first, which is uniramous. There is some doubt whether this is an advanced state, as had been traditionally assumed, or whether it may be a primitive state, with the branching of the limbs being lost in all extant arthropod groups except the crustaceans. One piece of evidence supporting the latter view is the biramous nature of trilobite limbs (Hughes 2003).

Although a few are hermaphroditic, most crustaceans have separate sexes distinguished by appendages on the abdomen called swimmerets or, more technically, pleopods. The first (and sometimes the second) pair of pleopods are specialized in the male for sperm transfer. Many terrestrial crustaceans (such as the Christmas Island red crab) mate seasonally and return to the sea to release the eggs. Others, such as woodlice lay their eggs on land, albeit in damp conditions. In many decapods, the eggs are retained by the females until they hatch into free-swimming larvae.

Carcinologists have long debated the taxonomic status of crustaceans, sometimes assigning the group to be at the phylum, subphylum, or superclass level, and with five, six, or even ten classes recognized (Hobbs 2003). Others have listed the Crustacea as a class.

The system used by Martin & Davis (2001) is one system considered by some to be authoritative and superceding earlier works.

In some taxonomic schemes that consider the Crustacea to be a "class," these divisions are considered to be "orders."

Some biological classifications do not recognize Maxillopoda as a class, but recognize the barnacles, copepods, and others as separate classes:

The exact relationships of the Crustacea to other taxa are not yet entirely clear. Under the Pancrustacea hypothesis (Zrzavý and Štys 1997), Crustacea and Hexapoda (insects and allies) are sister groups. Studies using DNA sequences tend to show a paraphyletic Crustacea, with the insects (but not necessarily other hexapods) nested within that clade.

Those crustaceans, such as crabs and lobsters, that have hard exoskeletons reinforced with calcium carbonate tend to preserve well as fossils, but many crustaceans have only thin exoskeletons. Most of the crustacean fossils known are from coral reef or shallow sea-floor environments, but many crustaceans live in open seas, on deep sea-floors, or in burrows. Crustaceans tend, therefore, to be rarer in the fossil record than trilobites. Some crustaceans are reasonably common in Cretaceous and Cenozoic rocks, but barnacles have a particularly poor fossil record, with very few specimens from before the Mesozoic era.

The Late Jurassic lithographic limestones of Solnhofen, Bavaria, which are famous as the home of Archaeopteryx, are relatively rich in decapod crustaceans (five pairs of legs), such as Eryon (an eryonoid), Aeger (a prawn) or Pseudastacus (a lobster). The "lobster bed" of the Greensand formation from the Cretaceous period, which occurs at Atherfield on the Isle of Wight, contains many well preserved examples of the small glypheoid lobster Mecochirus magna. Crabs have been found at a number of sites, such as the Cretacoues Gault clay and the Eocene London clay.