The Mesozoic (from the Greek prefix meso meaning “between” and zoon, animal or "living being") era is an interval of about 186 million years defined on the geologic timescale as spanning roughly from 251 to 65 million years ago (mya), and as being the second of three eras of the Phanerozoic eon. The Mesozoic era lies between the earlier Paleozoic era and the later Cenozoic era, which extends up to and includes the present time. The opening and the closing of the Paleozoic era are both marked by major extinction events.

The Mesozoic era is separated into three geologic periods: Triassic, Jurassic, and Cretaceous. Although the Mesozoic era is often called the "Age of the Dinosaurs," many other diverse animal and plant species appeared during this time as well. After the earlier consolidation of the land masses to form the super-continent Pangea with its dry land interior, the Mesozoic era was marked by the break-up of Pangea to yield the pattern of dispersed land masses that largely has persisted up to the present time. Global temperatures were considerably higher than in both the earlier and later eras, and sea levels rose up to 200 meters (656 feet) due to the continental movement and changes in the sea floor. 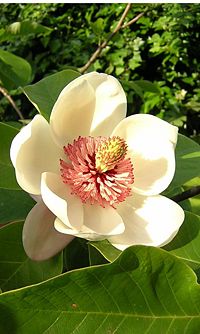 Magnolia, an ancient flowering plant whose fossilized ancestors date back to the Mesozoic era more than 80 million years ago.

Just as in the development of a human being, in the history of life on earth, later stages develop on the foundation of earlier stages. By the end of the Mesozoic era, the basis of modern life was largely in place.

The original name for the Mesozoic era as assigned by Giovanni Arduino, who divided time into eras in the eighteenth century, was not Mesozoic but "Secondary" (with the Paleozoic era labeled "Primitive" and the modern era the "Tertiary"). The prior Paleozoic was the era when most of the basic animal body plans came into existence. Following the Paleozoic era, the Mesozoic era lasted roughly 180 million years: From 251 million years ago (mya) to when the Cenozoic era began 65 mya.

The three geologic periods into which the Mesozoic are separated, from oldest to youngest, are:

Did you know?
The Mesozoic began after the "Great Dying" - the largest mass extinction in history

The lower boundary of the Mesozoic (beginning of the Triassic) is established by the Permian-Triassic extinction, during which approximately 90 percent of marine species and 70 percent of terrestrial vertebrates became extinct. It is also known as the "Great Dying" because it is considered the largest mass extinction in history.

The upper boundary (end of the Cretaceous) is marked at the Cretaceous-Tertiary (KT) extinction, which may have been caused by the meteor that created the Chicxulub Crater on the Yucatán Peninsula. Approximately 50 percent of all genera became extinct, including all of the non-avian dinosaurs.

The Mesozoic was a time of great tectonic, climatic, and evolutionary activity. The continents gradually shifted from a state of connectedness into their present configuration. The climate was exceptionally warm throughout the period.

After the vigorous convergent plate mountain-building of the late Paleozoic, Mesozoic tectonic deformation was comparatively mild. Nevertheless, the era featured the dramatic rifting of the supercontinent Pangea. Pangea gradually split into a northern continent, Laurasia, and a southern continent, Gondwana. This created the passive continental margin that characterizes most of the Atlantic coastline (such as along the United States East Coast) today (Stanley 1999).

By the end of the era, the continents had rifted into nearly their present form. Laurasia became North America and Eurasia, while Gondwana split into South America, Africa, Australia, Antarctica, and the Indian subcontinent, which collided with the Asian plate, during the Cenozoic, the impact giving rise to the Himalayas.

The Triassic was generally dry, a trend that began in the late Carboniferous. It was also highly seasonal, especially in the interior of Pangea. Low sea levels may have also exacerbated temperature extremes. Water acts as a temperature-stabilizing heat sink due to its high specific heat capacity, and land areas near large bodies of water, especially the oceans, experience less variation in temperature. Because much of the land that constituted Pangea was distant from the oceans, temperatures fluctuated enormously, and the interior of Pangea probably included expansive areas of desert. Abundant evidence of red beds and evaporites such as salt support these conclusions.

Sea levels began to rise during the Jurassic, probably due to an increase in sea floor spreading. The formation of new crust beneath the surface displaced ocean waters by as much as 200 m more than today, which flooded coastal areas. Furthermore, Pangea began to rift into smaller divisions, bringing more land area in contact with the ocean by forming the Tethys Sea. Temperatures continued to increase and began to stabilize. Humidity also increased with the proximity of water, and deserts retreated.

The climate of the Cretaceous is less certain and more widely disputed. Due in part to higher levels of carbon dioxide in the atmosphere, the world temperature gradient from North to South became almost flat: temperatures were about the same across the planet. Average temperatures were also higher than today, about 10°C. In fact, by the middle Cretaceous, equatorial ocean waters, perhaps as warm as 20°C in the deep ocean, may have been too warm for sea life and land areas near the equator may have been deserts despite their proximity to water. The circulation of oxygen to the deep ocean may also have been disrupted. For this reason, large volumes of organic matter accumulated, because they were unable to decompose and were eventually deposited as "black shale."

Not all of the data support these hypotheses, however. Even with the overall warmth, temperature fluctuations should have been sufficient for the presence of polar ice caps and glaciers, but there is no evidence of either. Quantitative models have also been unable to recreate the flatness of the Cretaceous temperature gradient.

The extinction of nearly all animal species at the end of the Permian period allowed for the radiation of many new lifeforms. In particular, the extinction of the large herbivorous and carnivorous dinocephalia (a group of early, mammal-like reptiles) left those ecological niches empty. Some were filled by the surviving cynodonts and dicynodonts, the latter of which subsequently became extinct. Animal life during the Mesozoic was dominated, however, by large archosaurian reptiles that appeared a few million years after the Permian extinction: Dinosaurs, pterosaurs, and aquatic reptiles such as ichthyosaurs, plesiosaurs, and mosasaurs.

The climatic changes of the late Jurassic and Cretaceous provided for further adaptive radiation. The Jurassic was the height of archosaur diversity, and the first birds and placental mammals also appeared. Angiosperms radiated sometime in the early Cretaceous, first in the tropics, but the even temperature gradient allowed them to spread toward the poles throughout the period. By the end of the Cretaceous, angiosperms dominated tree floras in many areas, although some evidence suggests that biomass was still dominated by cycad and ferns until after the KT extinction.

Some have argued that insects diversified along with angiosperms because insect anatomy, especially the mouth parts, seems particularly well-suited for flowering plants. However, all major insect mouth parts preceded angiosperms and insect diversification actually slowed when they arrived, so insect anatomy originally must have been suited for some other purpose.

As the temperatures in the seas increased, the larger animals of the early Mesozoic gradually began to disappear while smaller animals of all kinds, including lizards, snakes, and perhaps the ancestor mammals to primates, evolved. The K-T extinction exacerbated this trend. The large archosaurs (dinosaurs, etc.) became extinct, while birds and mammals thrived, as they do today.