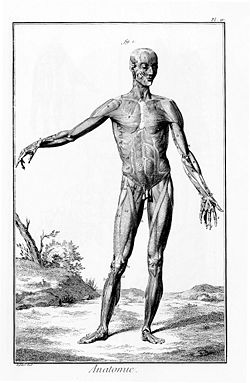 Anatomical drawing of the human muscles from the Encyclopédie.

Since the function of a part is related to its structure, anatomy naturally is related to physiology, which refers either to the mechanical, physical, and biochemical functions of living organisms and their parts or to the study of those functions.

Anatomy comprises the subdivisions of animal anatomy and plant anatomy (or phytotomy). (Study of external plant structure is known as plant morphology.) Anatomy may also be subdivided either regionally or systemically; that is, relating to particular bodily regions, such as the head and chest, or to specific systems, such as the nervous or respiratory systems.

The term anatomy comes from the Greek ἀνατομία anatomia, from ἀνατέμνειν anatemnein, meaning to cut up or cut open.

Like all fields of knowledge, anatomy is necessarily tied to a conceptual framework. Galen, the Greek anatomist whose anatomical studies and conceptual framework undergirded Western medicine for 15 centuries, taught that the blood moved to and from the heart under the impetus of Aristotle's substance "quintessence," and that three human souls—vegetative, animal, and rational—resided respectively in the liver, the heart, and the brain, the three largest solid organs in the body. Galen's anatomy and medical model remained largely intact until the publication by Andrea Vesalius in 1543 of his detailed drawings of human anatomy, which became the basis for a radical revisioning of human physiology and of medical treatment. (Bergland, 1985) 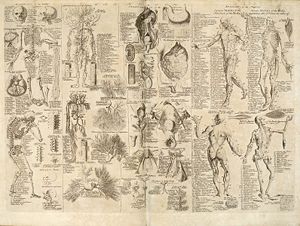 Anatomical chart from the Cyclopaedia, 1728

From the time of Vesalius, anatomy has been a key field of scientific investigation that from one perspective has been stripping away the vestiges of mystery and wonder about the human body. Yet as anatomical studies reveal the human body components, the studies also open the challenge of how these multiple layers of components achieve their integrated functioning and how they could have come to exist.

The history of anatomy as a science extends from the earliest examinations of sacrificial victims to the sophisticated analysis of the body performed by modern scientists. It has been marked, over time, by a continually developing understanding of the functions of organs and structures in the body. Methods have also advanced dramatically, from examination of animals, through dissection of cadavers, and on to technologically complex techniques developed in the twentieth century. The following is largely a history centered on the developing science of studying human anatomy.

The study of anatomy began at least as early as 1600 B.C.E., the date of the ancient Egyptian Edwin Smith papyrus. This treatise identifies the heart, liver, spleen, kidneys, uterus, and bladder, and indicates that blood vessels come from the heart. Other vessels are described, some carrying air, some mucus, while two to the right ear are said to carry the "breath of life," and two to the left ear the "breath of death." The Ebers papyrus (c. 1550 B.C.E.) features a treatise on the heart. It notes that the heart is the center of the blood supply, with vessels attached for every member of the body. The Egyptians seem to have known little about the function of the kidneys and made the heart the meeting point of a number of vessels that carried all the fluids of the body—blood, tears, urine, and sperm (Porter 1997).

The earliest medical scientist of whose works any great part survives today is Hippocrates, an ancient Greek physician active in the late fifth and early fourth centuries B.C.E. (460-377 B.C.E.). His work demonstrates a basic understanding of musculoskeletal structure, and the beginnings of understanding of the function of certain organs, such as the kidneys. Much of his work, however, and much of that of his students and followers later, relies on speculation rather than empirical observation of the body.

In the fourth century B.C.E., Aristotle and several contemporaries produced a more empirically founded system, based on dissection of animals. Works produced around this time are the first to identify the difference between arteries and veins, and the relations between organs are described more accurately than in previous works.

The first use of human cadavers for anatomical research occurred later in the fourth century B.C.E. when Herophilos and Erasistratus performed dissections of cadavers in Alexandria under the auspices of the Ptolemaic dynasty. Herophilos in particular developed a body of anatomical knowledge much more informed by the actual structure of the human body than previous works had been.

The final major anatomist of ancient times was Galen, active in the second century. He compiled much of the knowledge obtained by previous writers, and furthered the inquiry into the function of organs by performing vivisection on animals. His collection of drawings, based mostly on dog anatomy, became the anatomy textbook for 1500 years. The original text is long gone, and his work was only known to the Renaissance doctors through the careful custody of Arabic medicine, since the Roman Catholic Church destroyed the work as heresy. Hampered by the same religious restrictions as anatomists for centuries after him, Galen assumed that anatomical structures in dogs were the same as for humans.[1] 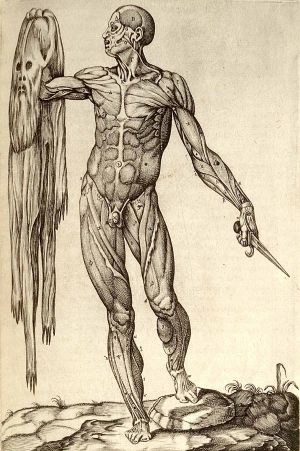 In this 1559 anatomical plate by Juan Valverde de Amusco, a figure holds a knife in one hand and his own skin in the other.

Little progress was made in anatomy for some time after the fall of the Roman empire. Although Arab scientists contributed heavily to medieval learning and culture, taboos against handling corpses limited their contributions to anatomical research. The first major development in anatomy after Galen occurred at Bologna in the fourteenth to sixteenth centuries, where a series of authors dissected cadavers and further contributed to the accurate description of organs and the identification of their functions. Prominent among these anatomists were Mondino de Liuzzi and Alessandro Achillini.

The sixteenth century also saw the first challenges to Galen. Thanks to the printing press, all over Europe a collective effort proceeded to distill the original Galen from the various, mostly Arab, added texts. Vesalius was the first to publish a treatise that challenged him "drawing for drawing," traveling all the way from Leuven[2] to Padua for permission to dissect victims from the gallows without fear of persecution. His drawings are triumphant descriptions of the, sometimes major, discrepancies between dogs and humans, showing superb drawing ability. Many later anatomists challenged Galen in their texts, though Galen reigned supreme for another century. 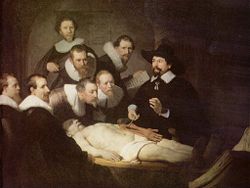 The Anatomy Lesson of Dr. Nicolaes Tulp, by Rembrandt, depicts an autopsy.

The study of anatomy flourished in the seventeenth and eighteenth centuries. With the aid of the printing press, the exchange of ideas across Europe was easily facilitated. Since the study of anatomy concerned observation and drawings, the popularity of the anatomist was equal to the quality of his drawing talents, and one need not be an expert in Latin to take part. [3] Many famous artists studied anatomy, attended dissections, and published drawings for money, from Michelangelo to Rembrandt. For the first time, prominent universities could teach something about anatomy through drawings, rather than relying on knowledge of Latin.

The only stumbling block was a possible reprimand from the Church, which frightened several anatomists of that time from performing dissections on their own kind. Though a very fruitful period for the sciences, the Renaissance could be dangerous, as is seen in the case of Galileo. Some scientists of the time were scared enough to keep moving from city to city. Descartes is a prime example. Though all physicians agreed that a sound knowledge of anatomy was important to perform medicine, only certified anatomists were allowed to perform dissections, sometimes only yearly. These dissections were sponsored by the city councilors and often charged an admission fee, rather like a circus act for scholars. Many European cities, such as Amsterdam, London, Copenhagen, Padua, and Paris, all had Royal anatomists (or some such office) tied to local government. Indeed, Nicolaes Tulp was Mayor of Amsterdam for three terms. Though it was a risky business to perform dissections, attending dissections was perfectly legal, and many anatomy students traveled around Europe from dissection to dissection during the course of their study.

Many Europeans interested in the study of anatomy traveled to Italy, where the center of anatomy resided. Only in Italy could certain important research methods, such as dissections on women, be used. M. R. Columbus and Gabriele Falloppio were pupils of Vesalius, the sixteenth century anatomist. Columbus, as his immediate successor in Padua, and afterwards professor at Rome, distinguished himself by rectifying and improving the anatomy of the bones; by giving correct accounts of the shape and cavities of the heart, of the pulmonary artery and aorta and their valves, and tracing the course of the blood from the right to the left side of the heart; by a good description of the brain and its vessels, and by correct understanding of the internal ear, and the first good account of the ventricles of the larynx. Osteology at nearly the same time found an assiduous cultivator in Giovanni Filippo Ingrassias. 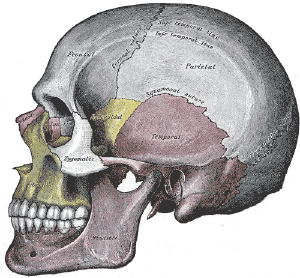 The Nineteenth century saw anatomists largely finalize and systematize the descriptive human anatomy of the previous century. The discipline also progressed to establish growing sources of knowledge in histology and developmental biology, not only of humans but also of animals. Extensive research took place in a growing number of areas, with England being a particular center of research. Demand for cadavers grew so great that body-snatching and even murder came into use as a means of obtaining them. In response, parliament passed the Anatomy Act of 1832, which finally provided for an adequate and legitimate supply of corpses. The relaxed restrictions on dissection provided the groundwork for Gray's Anatomy, a text that was a collective effort and became widely popular. Now seen as unwieldy, Gray's Anatomy was born out of a need to create a single volume on anatomy for the traveling doctor.

Anatomical research in the past hundred years has taken advantage of technological developments and growing understanding of sciences such as molecular biology to create a thorough understanding of the body's organs and structures. While disciplines such as endocrinology have explained the purpose of glands that previous anatomists could not explain, medical devices such as MRI machines and CAT scanners have enabled researchers to study the organs of living people. Progress today in anatomy is centered in the field of molecular biology, as the macroscopic aspects of the field have now been cataloged and addressed.