Side view of a flatworm. The flatworm's ribbon-shaped, flattened dorso-ventally body has no true body cavity (coelom) except the gut and thus flatworms are acoelomates.

In zoology, body cavity generally refers to the space, or cavity, located between an animal’s outer covering (epidermis) and the outer lining of the gut cavity—a fluid-filled space where internal organs develop. However, the term sometimes is used synonymously with the coelom or "secondary body cavity," which is more specifically that fluid-filled body cavity between the digestive tract and the outer body wall that is completely enclosed by cells derived from mesoderm tissue in the embryo. The broadest definition of the term body cavity is any fluid-filled space in a multicellular organism, including the digestive tract.

The concept of body cavity has been important in comparative studies of the body plans used by different taxonomic groups, ranging from simple organisms with two germ layers (ectoderm and endoderm) that lack a body cavity, to organisms with three germ layers (a mesoderm also) that lack a body cavity, to those with a cavity forming between the mesoderm and endoderm and not completely lined with mesoderm, to those with a true coelom completely lined with mesoderm.

Some animals lack any cavity; their cells are in close contact with each other, separated only by the extracellular matrix. Such organisms are known as acoelomates and have what can be called a "compact organization." However, many organisms have some type of cavity: Small interstitial spaces between cells, tube-like systems, large spaces, repeating units, and so forth (Schmidt-Rhaesa 2007). 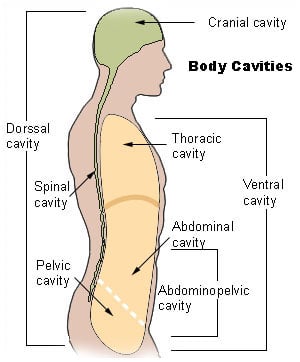 Note that the term human body cavities normally refers to the ventral body cavity, because it is by far the largest one in area.

Other than sponges, animals develop two or three germ layers during gastrulation (development of the embryo from the blatula to a gastrula). A germ layer is a layer of cells that gives rise to a specific structure in the organism, with the cells on the outside, known as the ectoderm, becoming the covering and those on the inside, known as the endoderm, becoming the gut lining (Towle 1989). Most animals form a third layer called a mesoderm, an embryonic layer that forms between the endoderm and ectoderm, and which gives rise to the muscles, skeleton, blood, blood vessels, and other interior body linings (Towle 1989).

All organisms more complex than a platyhelminthes have a coelom, whose lining is formed by the mesoderm. In deuterostomes, the mesoderm forms when there is division of the cells at the top of the gastrula; in protostomes, the cells split at the junction of the endoderm and ectoderm during gastrulation and there is rapid division of cells (Towle 1989). In coelomates, the mesodermal cells spread out and make the coelom, but in pseudocoelomates, such as the roundworm, the mesoderm lines the body cavity but does not expand to form a lining of the organs, forming rather a pseudocoelom ("false-body cavity") (Towle 1989).

The type of body cavity places an organism into one of three basic groups according to body plan:

Note, however, even within a particular taxonomic group, there may be cases of organisms reflecting two different body plans. Such would be the case, for example, where the larva of an organism may be a pseduocoelomate, being small and with respiration able to take place by diffusion, while the large adult organism may be a coelomate.

A coelom is a cavity lined by an epithelium derived from mesoderm. Organs formed inside a coelom can freely move, grow, and develop independently of the body wall while fluid cushions and protects them from shocks. Arthropods and mollusks have a reduced (but still true) coelom. Their principal body cavity is the hemocoel of an open circulatory system.

Coelom formation begins in the gastrula stage. The developing digestive tube of an embryo forms as a blind pouch called the archenetron. In Protostomes, a process known as schizocoelus happens: as the archenteron initially forms, the mesoderm splits to form the coelomic cavities. In Deuterostomes, a process known as enterocoelus happens: The mesoderm buds from the walls of the archenteron and hollows to become the coelomic cavities.

Among advantages of a coelom is it allows for more extensive growth of organs, including the digestive tract, it permits the formation of an efficient circulatory system, the fluid can transport materials faster than by diffusion, there is space provided for gonads to develop during the breeding season or for young to grow in those animals, and so forth (Simmons 2004).

In some protostomes, the embryonic blastocoele persists as a body cavity. These protostomes have a fluid-filled main body cavity unlined or partially lined with tissue derived from mesoderm. This fluid-filled space surrounding the internal organs serves several functions like distribution of nutrients and removal of waste or supporting the body as a hydrostatic skeleton.

The term pseudocoelomate is no longer considered a valid taxonomic group, since it is not monophyletic. However, it is still used as a descriptive term. A pseudocoelomate is any invertebrate animal with a three-layered body and a pseudocoel. The coelom appears to have been lost or reduced as a result of mutations in certain types of genes that affected early development. Thus, pseudocoelomates evolved from coelomates (Evers and Starr 2006).

Animals with this body plan:

Lacking a fluid-filled body cavity presents some serious disadvantages. Fluids do not compress, while the tissue surrounding the organs of these animals do. Therefore, acoelomate organs are not protected from crushing forces applied to the animal’s outer surface. There are restrictions on size and locomotion, for any increase in size would require increase in volume of tissue to be nourished, but the solid body places prevents formation of an efficient circulating system and the solid body places pressure on organs during movement (Simmons 2004).

Organisms showing acoelomate formation include the platyhelminthes (flatworms, tapeworms, and so on) These creatures do not have a need for a coelom for diffusion of gases and metabolites, as the surface area to volume ratio is large enough to allow absorption of nutrients and gas exchange by diffusion alone, due to dorso-ventral flattening.