The cells of eukaryotes (left) and prokaryotes (right). 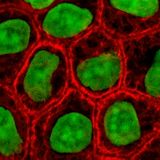 Cells in culture, stained for keratin (red) and DNA (green).

The cell is a membrane-enclosed body that is the structural and functional unit of living organisms, being the smallest unit that can carry on all life processes, including maintenance, growth, replication, and self-repair. As such, it is sometimes called the "building block of life" (Alberts et al. 2002).

Some organisms, such as bacteria, are unicellular, consisting of a single cell. Other organisms, such as humans, are multicellular. Humans have an estimated 100 trillion or 1014 cells; a typical cell size is 10 µm, a typical cell mass 1 nanogram. However, while a general characteristics of cells is that they are microscopic in size, biological cells also include vertebrate eggs (or ovum, the female reproductive cell), which commonly are visible to the unaided human eye, as well as nerve cells that can be very long in some organisms (perhaps 12 meters or 39 feet in the giant squid); there also are single-celled algae (genus Caulerpa) up to 3 meters or 10 feet in length.

All living organisms, with the exception of viruses (and there is debate whether or not they can be considered living organisms), consist of cells, demonstrating the unity, harmony, and interconnectedness of life.

The cell theory, first developed in 1839 by Matthias Jakob Schleiden and Theodor Schwann, states that all organisms are composed of one or more cells; all cells come from preexisting cells; all vital functions of an organism occur within cells, and cells contain the hereditary information necessary for regulating cell functions and for transmitting information to the next generation of cells.

The word cell comes from the Latin cellula, a small room. The name was chosen by Robert Hooke when he compared the cork cells he saw to the small rooms monks lived in. The specialization of cells in multicellular organisms to form many different organs and bodily systems all integrated into a harmonious, hierarchically arrayed collective, with each component of equal value and essential to the function of the whole, demonstrates a principle and pattern of organization that provides an analogue for systems of higher order, like ecosystems, families, and nations.

The study of cells is called cell biology or cellular biology.

A cell is the basic unit of life, being the smallest unit of life that can carry on all life processes (see life).

Each cell is at least somewhat self-contained and self-maintaining: it can take in nutrients, convert these nutrients into energy or component parts, carry out specialized functions, and reproduce as necessary. Each cell stores its own set of instructions for carrying out each of these activities. 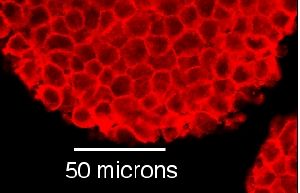 Mouse cells grown in a culture dish. These cells grow in large clumps, but each individual cell is about 10 micrometers across. 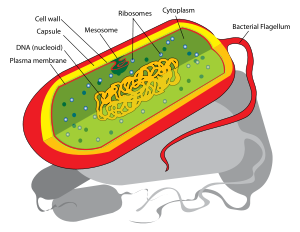 Prokaryotes are distinguished from eukaryotes on the basis of nuclear organization, specifically their lack of a nuclear membrane. Prokaryotes also lack most of the intracellular organelles and structures that are characteristic of eukaryotic cells. (An exception is the ribosomes, which are present in both prokaryotic and eukaryotic cells. However, the term organelle is commonly restricted to describing sub-cellular components that include a phospholipid membrane, which ribosomes, being entirely particulate, do not. For this reason, ribosomes are sometimes be described as "non-membranous organelles.") Most of the functions performed by eukaryote organelles, such as mitochondria, chloroplasts, and the Golgi apparatus, are done by the prokaryotic plasma membrane.

Prokaryotic cells have three architectural regions: (1) appendages called flagella and pili—proteins attached to the cell surface; a cell envelope consisting of a capsule, a cell wall, and a plasma membrane; and a cytoplasmic region that contains the cell genome (DNA), ribosomes, and various sorts of inclusions.

Eukaryotic cells are about 10 times the diameter of a typical prokaryote and can be as much as 1000 times greater in volume. The major difference between prokaryotes and eukaryotes is that eukaryotic cells contain membrane-bound compartments in which specific metabolic activities take place. Most important among these is the presence of a cell nucleus, a membrane-delineated compartment that houses the eukaryotic cell's DNA. It is this nucleus that gives the eukaryote its name, which means "true nucleus."

Comparison of prokaryotic and eukaryotic cells

Comparison of animal and plant cells

All cells, whether prokaryotic or eukaryotic, have a membrane, which envelopes the cell, separates its interior from its environment, regulates what moves in and out (selectively permeable), and maintains the electric potential of the cell. Inside the membrane, a salty cytoplasm takes up most of the cell volume. All cells possess DNA, the hereditary material of genes, and RNA, containing the information necessary to build various proteins such as enzymes, the cell's primary machinery. There are also other kinds of biomolecules in cells. This article will list the primary components of the cell and briefly describe their function.

The cytoplasm of a cell is surrounded by a plasma membrane. The plasma membrane in plants and prokaryotes is usually covered by a cell wall. This membrane serves to separate and protect a cell from its surrounding environment and is made mostly from a double layer of phospholipid molecules, each molecule being a composite of a lipid (hydrophobic fat-like molecule) and hydrophilic phosphate and amino groups. In water, millions of phospholipid molecules join to form a phospholipid bilayer, which may also be called a fluid mosaic membrane.

Embedded within this membrane are different types of protein molecules that act as channels and pumps moving different molecules into and out of the cell. The membrane is said to be 'semi-permeable', in that it can either let a substance (molecule or ion) pass through freely, pass through to a limited extent or not pass through at all. Cell surface membranes also contain receptor proteins that allow cells to detect external signaling molecules such as hormones. 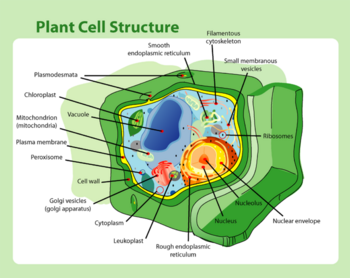 The cytoskeleton acts to organize and maintain the cell's shape; anchors organelles in place; helps during endocytosis, the uptake of external materials by a cell, and cytokinesis, the separation of daughter cells after cell division; and helps move parts of the cell in processes of growth and mobility. Eukaryotic cytoskeleton comprises microfilaments, intermediate filaments, and microtubules. A great number of associated proteins are involved in maintaining a cell's structure by directing, bundling, and aligning filaments.

Two different kinds of genetic material exist: deoxyribonucleic acid (DNA) and ribonucleic acid (RNA). Most organisms use DNA for their long-term information storage, but some viruses (e.g., retroviruses) have RNA as their genetic material. The biological information contained in an organism is encoded in its DNA or RNA sequence. RNA is also used for information transport (e.g., mRNA) and enzymatic functions (e.g., ribosomal RNA) in organisms that use DNA for the genetic code itself.

Foreign genetic material (most commonly DNA) can also be artificially introduced into the cell by a process called transfection. This can be transient, if the DNA is not inserted into the cell's genome, or stable, if it is.

Just as the human body cmprises many different organs, such as the heart, lung, and kidney, with each organ performing a different yet essential function, cells also have a set of "little organs," called organelles, that are adapted and/or specialized for carrying out one or more vital functions. Membrane-bound organelles are found only in eukaryotes.