Cyanobacteria (Greek: κυανόs (kyanós) = blue + bacterium) is a phylum (or "division") of bacteria that obtain their energy through photosynthesis.

Sometimes the prokaryotic cyanobacteria, given their aquatic and photosynthetic characteristic, have been included among the algae, and have been referred to as cyanophytes or blue-green algae. Recent treatises on algae often exclude them, and consider as algae only eukaryotic organisms.

Cyanobacteria are some of the oldest organisms to appear in the fossil record, dating back about 3.8 billion years (Precambrian). Ancient cyanobacteria likely produced much of the oxygen in the Earth's atmosphere, as they became the dominant metabolism for producing fixed carbon in the form of sugars from carbon dioxide.

Cyanobacteria are now one of the largest and most important groups of bacteria on earth. They are found in almost every conceivable habitat, from oceans to fresh water to bare rock to soil.

Cyanobacteria have a prokaryotic cell structure typical of bacteria and conduct photosynthesis directly within the cytoplasm, rather than in specialized organelles. Some filamentous blue-green algae have specialized cells, termed heterocysts, in which nitrogen fixation occurs.

They may be single-celled or colonial. Colonies may form filaments, sheets, or even hollow balls. Some filamentous colonies show the ability to differentiate into three different cell types: vegetative cells are the normal, photosynthetic cells that are formed under favorable growing conditions; akinetes are the climate-resistant spores that may form when environmental conditions become harsh; and thick-walled heterocysts are those that contain the enzyme nitrogenase, vital for nitrogen fixation, and that may also form under the appropriate environmental conditions wherever nitrogen is present. Heterocyst-forming species are specialized for nitrogen fixation and are able to fix nitrogen gas, which cannot be absorbed by plants, into ammonia (NH3), nitrites (NO2−), or nitrates (NO3−), which can be absorbed by plants and converted to protein and nucleic acids. The rice paddies of Asia, which feed about 75 percent of the world's human population, could not do so were it not for healthy populations of nitrogen-fixing cyanobacteria in the rice paddy waters.

Each individual cell typically has a thick, gelatinous cell wall, which stains gram-negative. The cyanophytes lack flagella, but may move about by gliding along surfaces. Most are found in fresh water, while others are marine, occur in damp soil, or even temporarily moistened rocks in deserts. A few are endosymbionts in lichens, plants, various protists, or sponges and provide energy for the host. Some live in the fur of sloths, providing a form of camouflage.

Cyanobacteria have an elaborate and highly organized system of internal membranes that function in photosynthesis. Photosynthesis in cyanobacteria generally uses water as an electron donor and produces oxygen as a by-product, though some may also use hydrogen sulfide, as occurs among other photosynthetic bacteria. Carbon dioxide is reduced to form carbohydrates via the Calvin cycle. In most forms, the photosynthetic machinery is embedded into folds of the cell membrane, called thylakoids.

The large amounts of oxygen in the atmosphere are considered to have been first created by the activities of ancient cyanobacteria. Due to their ability to fix nitrogen in aerobic conditions, they are often found as symbionts with a number of other groups of organisms, such as fungi (lichens), corals, pteridophytes (Azolla), and angiosperms (Gunnera).

Cyanobacteria are the only group of organisms that are able to reduce nitrogen and carbon in aerobic conditions, a fact that may be responsible for their evolutionary and ecological success. The water-oxidizing photosynthesis is accomplished by coupling the activity of photosystem (PS) II and I. They are also able to use in anaerobic conditions only PS I—cyclic photophosphorylation—with electron donors other than water (hydrogen sulfide, thiosulphate, or even molecular hydrogen) just like purple photosynthetic bacteria. Furthermore, they share an archaebacterial property—the ability to reduce elemental sulfur by anaerobic respiration in the dark.

Attached to the thylakoid membrane, phycobilisomes act as light harvesting antennae for photosystem II. The phycobilisome components (phycobiliproteins) are responsible for the blue-green pigmentation of most cyanobacteria. The variations to this theme is mainly due to carotenoids and phycoerythrins, which give the cells the red-brownish coloration. In some cyanobacteria, the color of light influences the composition of phycobilisomes. In green light, the cells accumulate more phycoerythrin, whereas in red light they produce more phycocyanin. Thus, the bacteria appears green in red light and red in green light. This process is known as complementary chromatic adaptation and is a way for the cells to maximize the use of available light for photosynthesis.

Chlorophyll a and several accessory pigments (phycoerythrin and phycocyanin) are embedded in photosynthetic lamellae, the analogs of the eukaryotic thylakoid membranes. The photosynthetic pigments impart a rainbow of possible colors: yellow, red, violet, green, deep blue, and blue-green cyanobacteria are known. A few genera, however, lack phycobilins and have chlorophyll b as well as chlorophyll a, giving them a bright green colour. These were originally grouped together as the prochlorophytes or chloroxybacteria, but appear to have developed in several different lines of cyanobacteria. 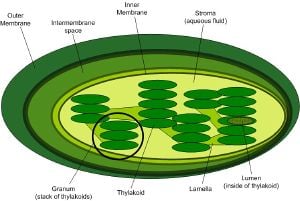 The inside of a chloroplast with the granum circled. (A granum is a stack of thylakoids, the sub-organelles where photosynthesis takes place.)

Chloroplasts found in eukaryotes (algae and higher plants) are generally thought to have evolved from an endosymbiotic relation with cyanobacteria. This endosymbiotic theory is supported by various structural and genetic similarities.

Like mitochondria, which are also assumed to result from an endosymbiotic relationship, chloroplasts are surrounded by a double celled composite membrane with an intermembrane space, has its own DNA, is involved in energy metabolism and has reticulations, or many infoldings, filling their inner spaces. The inner membrane of the chloroplasts in green plants is thought to correspond to the outer membrane of the ancestral cyanobacterium. The chloroplast genome is considerably reduced compared to that of free-living cyanobacteria, but the parts that are still present show clear similarities. Many of the assumed missing genes are encoded in the nuclear genome of the host.

It was once thought that the mitochondria in eukaryotes also developed from an endosymbiotic relationship with cyanobacteria; however, it is now considered that this phenomena occurred when aerobic Eubacteria were engulfed by anaerobic host cells. Mitochondria are believed to have originated not from cyanobacteria but from an ancestor of Rickettsia.

The cyanobacteria were traditionally classified by morphology into five sections, referred to by the numerals I-V. The first three—Chroococcales, Pleurocapsales, and Oscillatoriales—are not supported by phylogenetic studies. However, the latter two—Nostocales and Stigonematales—are considered to be monophyletic and make up the heterocystous cyanobacteria.

Most taxa included in the phylum or division Cyanobacteria have not been validly published under the International Code of Nomenclature of Bacteria. Exceptions inclue:

The unicellular cyanobacterium Synechocystis sp. PCC 6803 was the first photosynthetic organism whose genome was completely sequenced (in 1996, by the Kazusa Research Institute, Japan). It continues to be an important model organism.

At least one secondary metabolite, cyanovirin, has shown to possess anti-HIV activity.

Some cyanobacteria are sold as food, notably Aphanizomenon flos-aquae (E3live) and Arthrospira platensis (Spirulina). It has been suggested that they could be a much more substantial part of human food supplies, as a kind of superfood.

Along with algae, some hydrogen producing cyanobacteria are being considered as an alternative energy source.

Some species of cyanobacteria produce neurotoxins, hepatotoxins, cytotoxins, and endotoxins, making them dangerous to animals and humans. Several cases of human poisoning have been documented but a lack of knowledge prevents an accurate assessment of the risks.[1][2]

Retrieved from https://www.newworldencyclopedia.org/p/index.php?title=Cyanobacteria&oldid=1037127
Categories:
This page was last edited on 12 May 2020, at 17:46.
Content is available under Creative Commons Attribution/Share-Alike License; additional terms may apply. See Terms of Use for details.