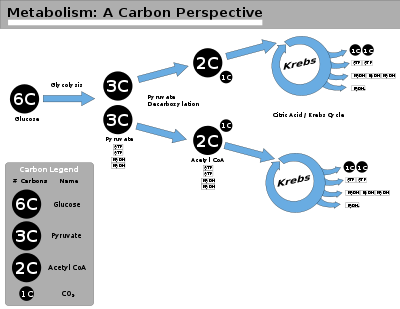 Metabolism (from μεταβολισμος, "metabolismos") is the biochemical modification of chemical compounds in living organisms and cells. This includes both anabolism—the biosynthesis of complex organic molecules—and catabolism—the breakdown of complex molecules to yield both energy-carrying molecules and essential building-block molecules—with the products of both anabolism and catabolism being required for maintenance, growth, movement, and reproduction.

Metabolism is a unifying aspect of all forms of life, with the most complex forms of life relying on some of the same metabolic pathways found in single-celled organisms. Knowledge of metabolism has accumulated over a period of more than 400 years, and especially in the first half of the twentieth century, through the experiments and studies of hundreds of research scientists. The core metabolic processes have been synthesized and standardized into the Chart of Intermediary Metabolism. No organism uses all of the reactions on the Chart, but all organisms use some selection of the reactions. The Chart of Intermediary Metabolism is posted on the walls of biochemistry and molecular biology laboratories in a way that is similar to the posting of the Periodic Table of the Elements on the walls of chemistry labs.

Santorio in his steelyard balance

The term "metabolism" is derived from the Greek word for "change," or "overthrow."

The first controlled experiments in human metabolism were published by Santorio Santorio (1561-1636) in 1614, in his book, Ars de Statica Medecina, that made him famous throughout Europe. He described his long series of experiments in which he weighed himself in a chair suspended from a steelyard balance before and after eating, sleeping, working, sex, fasting, depriving from drinking, and excreting. He found that by far the greatest part of the food he took in was lost from the body through perspiratio insensibilis (insensible perspiration).

Cell metabolism is the sum of many ongoing individual processes by which living cells process nutrient molecules and maintain a living state. 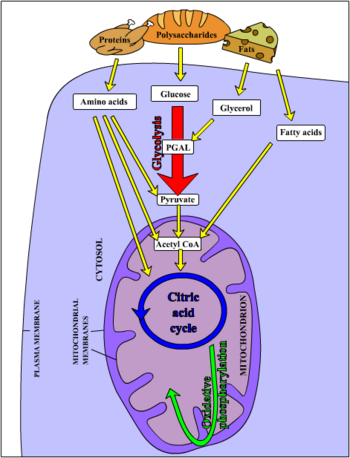 A few of the metabolic pathways in a cell.

The great variety of metabolic pathways is organized under the two themes, anabolism and catabolism, which are described below.

Anabolism is the part of metabolism that builds larger molecules.

Anabolism is the set of metabolic processes that construct organic compounds from smaller component molecules and further tend toward assembling these in ways that "build up" organs and tissues. These processes support growth and differentiation of cells, increase in body size, and reproduction. Examples of anabolic processes include growth and mineralization of bone and increase of muscle mass.

Anabolic pathways that create building blocks and compounds from simple precursors include the following:

The creation of cellular metabolites is an oxidation process involving a release of chemical free energy, some of which is lost as heat and some of which is conserved as the released energy drives the synthesis of adenosine triphosphate (ATP). The hydrolysis of ATP (i.e., the break down of ATP in reaction with water) is subsequently used to drive almost every energy-requiring reaction in the cell. Thus, catabolism provides the chemical energy necessary for the maintenance of the living cell.

Examples of catabolic processes include breakdown of muscle protein in order to use amino acids as substrates for gluconeogenesis, and breakdown of fat in adipose cells (fat-storage cells) to fatty acids.

Because it is counterproductive to have anabolic and catabolic processes occurring in cells simultaneously, there are many signals that switch on anabolic processes while switching off catabolic processes and vice versa. Most of the known signals are hormones and the molecules involved in metabolism itself. Endocrinologists (those who study the endocrine system, the system of ductless glands that release certain hormones into the bloodstream) have traditionally classified many of the hormones as anabolic or catabolic.

Carbohydrate catabolism is the breakdown of carbohydrates into smaller units. The empirical formula for carbohydrates, like that of their monomer counterparts, is CX(H2YOY). Carbohydrates literally undergo combustion as the cell releases and captures the large amounts of energy in their bonds. The cell's mitochondria are essential to catabolism, as they are the site of oxidative phosphorylation, an electron transport process that converts high energy NADH molecules produced by the catabolism of carbohydrates into the cell's most readily transportable and usable energy molecule, adenosine triphosphate (ATP).

The smooth endoplasmic reticulum is responsible for some carbohydrate metabolism. In the liver, for example, the cell breaks down the polysaccharide glycogen. Eventually, the glycogen will be turned into glucose, and released into the blood, but first it is broken into glucose phosphate, an ion that, if released, would damage blood cells. An enzyme found in the membrane of the smooth endoplasmic reticulum catalyzes removal of the phosphate to yield the pure glucose that is released.

Fat catabolism, also known as lipid catabolism, is the process by which lipids or phospholipids are broken down by lipases. The opposite of fat catabolism is fat anabolism, involving the storage of energy and the building of membranes.

Protein catabolism is the breakdown of proteins into amino acids and simple derivative compounds, for transport into the cell through the plasma membrane and ultimately for polymerization into new proteins through the joint functioning of ribonucleic acids (RNA) and ribosomes.

Fatty acids are an important source of energy for many organisms. Triglycerides, or molecules that store fatty acids, yield more than twice as much energy for the same mass as do carbohydrates or proteins. All cell membranes are built up of phospholipids, each of which contains two fatty acids. Fatty acids are also commonly used for protein modification, and all steroid hormones are ultimately derived from fatty acids.

Fatty acids are an important source of energy because they are both reduced and anhydrous. The energy yield from a gram of fatty acids is approximately 9 kcal (39 kJ), compared to 4 kcal/g (17 kJ/g) for proteins and carbohydrates. Since fatty acids are non-polar molecules, they can be stored in a relatively anhydrous (water-free) environment. Carbohydrates, on the other hand, are more highly hydrated and hence more polarized. For example, one gram of glycogen (from carbohydrate) can bind approximately two grams of water, which translates to 1.33 kcal/g (5.6 kJ/g).This means that fatty acids can hold more than six times the amount of energy.

Put another way, if the human body relied on carbohydrates to store energy, then a person would need to carry 67.5 lb (31 kg) of glycogen to have the equivalent energy of ten pounds (five kilograms) of fat.

Drug metabolism pathways use specialized enzyme systems to modify or degrade drugs and other xenobiotic compounds (chemicals found in an organism that are not normally produced or expected to be present, or which are present at unusually high concentrations). Examples include the following:

Nitrogen metabolism includes the pathways for turnover and excretion of nitrogen in organisms as well as the biological processes of the biogeochemical nitrogen cycle: