A nucleotide is a chemical compound with three components: a nitrogen-containing base, a pentose (five-carbon) sugar (relatively simple carbohydrates), and one or more phosphate groups. Although best known as the structural units of the nucleic acids DNA and RNA, which store and transfer genetic information in organisms, nucleotides participate in nearly all biochemical processes.

The ubiquitous presence of nucleotides from viruses and bacteria to humans reflects a common base and unity among all living organisms despite the remarkable diversity of life.

Nucleotides play a variety of key roles in cellular metabolism:

The nitrogen-containing base of a nucleotide (also called the nucleobase) is typically a derivative of either purine or pyrimidine, which are heterocyclic compounds (organic compounds that contain a ring structure that has, in addition to carbon, such atoms as sulfur, oxygen, or nitrogen). The most common bases in nucleotides are:

Nucleotides consist of a pentose sugar (brown), one or more phosphate groups (red), and a heterocyclic base (blue). The structures of some of the common bases, which are derivatives of either purine or pyrimidine, are pictured at right.

Nucleotide names are abbreviated into standard three- or four-letter codes that indicate their structural components:

G: Guanine
A: Adenine
T: Thymine
C: Cytosine
U: Uracil (which is not present in DNA, but takes the place of thymine in RNA)

The chemical structure of dATP

Thus, for example, deoxy-adenosine-triphosphate (pictured at right), one of the activated precursors in the synthesis of DNA, is abbreviated as dATP.

Nucleotides are the components of DNA and RNA

The nucleic acids DNA and RNA are polymers of nucleotide units; that is, they contain a large number of repeating nucleotide units connected by covalent chemical bonds. RNA molecules, for example, can contain as few as 75 nucleotides to more than five thousand nucleotides.

DNA consists of two helical deoxyribonucleotide chains coiled around a common axis. The chains run in opposite directions, and are held together by hydrogen bonds between pairs of bases from each chain. Adenine is always paired with thymine, and guanine with cytosine (i.e., a purine pairs with a pyrimidine).

Because pairing causes the nucleotide bases to face inward toward the helical axis, the sugar and phosphate groups of the nucleotides run along the outside; the two chains they form are sometimes called the backbones of the helix. In fact, it is chemical bonds between the phosphates and the sugars that link one nucleotide to the next in the DNA strand. Thus, the sugar-phosphate backbones play a primarily structural role. 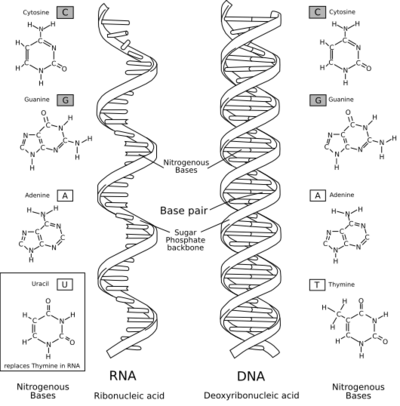 A comparison of the DNA double-helix and a single-stranded RNA, showing the chemical structures of the bases

In contrast, the nucleobases (which are the variable part of the nucleotide) carry genetic information. Within a gene, the sequence of nucleotides along a DNA strand defines a messenger RNA sequence, which in turn defines a protein. The relationship between the nucleotide sequence and the amino-acid sequence of the protein is determined by simple cellular rules of translation, known collectively as the genetic code. The genetic code is the relation between the sequence of bases in DNA (or its RNA transcript) and the sequence of amino acids in proteins. Amino acids are coded by groups of three bases (called codons) starting from a fixed point (e.g. ACT, CAG, TTT). These codons can then be translated with messenger RNA and then transfer RNA from the chemical language of nucleic acids to that of amino acids, with each codon corresponding to a particular amino acid.

There are two major differences between the nucleotide components of RNA and DNA: (1) the sugar units in RNA nucleotides are riboses rather than deoxyriboses and (2) one of the four major bases in RNA is uracil (U) instead of thymine (T).

ATP is the universal energy currency of the cell

A space filling image of ATP

While ATP (adenosine triphosphate) is one of four nucleotides required for the synthesis of ribonucleic acids, it is primarily known in biochemistry for its role in metabolism as the "molecular currency" of intracellular energy transfer. As the name suggests, the structure of this nucleotide consists of a purine base (adenine), a ribose sugar, and three phosphate groups.

ATP is an energy-rich molecule because it contains two phosphohydride bonds between its three phosphate groups. A large amount of energy is released when the hydrolysis of these high energy phosphate-phosphate bonds is carried out. This energy can be used to power reactions such as the active transport of molecules across cell membranes, the synthesis of macromolecules (e.g., proteins) from simple components, and the mechanical work of muscle contractions.

At any given moment, the total quantity of ATP in the human body is about 0.1 mole. The energy used by human cells requires the hydrolysis of 200 to 300 moles of ATP daily. This means that each ATP molecule is recycled two to three thousand times during a single day. ATP cannot be stored, hence its consumption must closely follow its synthesis.

Coenzymes are non-protein, organic molecules that assist enzymes in catalyzing specific reactions. While some coenzymes undergo chemical changes during the course of a reaction (e.g., being reduced or oxidized), they must be returned to their original state once the reaction has been completed. A recurring set of nucleotides facilitates metabolic reactions; it includes: 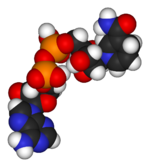 A space-filling model of NADH

The other major electron carrier in the oxidation of fuel molecules is FAD (flavin adenine dinucleotide).

A model of acetyl-CoA

The structure of cAMP

A common strategy of regulation involves the covalent attachment of phosphate groups to enzymes involved in metabolic reactions, which alters their catalytic activity. ATP donates one of its phosphate groups in these reactions, which are catalyzed by enzymes called protein kinases. This process, called phosphorylation, occurs within the cell, where ATP is abundant. It is a form of reversible covalent modification; phosphoryl groups may be removed by hydrolysis.

Cyclic adenosine monophosphate (cAMP or cyclic AMP), a molecule derived from ATP, transfers the effects of hormones like glucagon and adrenaline, which are first messengers that relay signals from one cell to another, to the intracellular environment. These hormones cannot get through the cell membrane, so cAMP serves as a second messenger, communicating their message within the cell. The regulatory effects of cAMP are achieved in eukaryotic cells by activating a specific protein kinase called PKA (protein kinase A). Cyclic AMP binds to specific locations on the two regulatory units of this enzyme, thus activating the catalytic units and enabling them to phosphorylate substrate proteins. cAMP controls many biological processes, including the decomposition of glycogen into glucose (glycogenolysis).

One explanation for the near ubiquity of nucleotides in the chemical processes of life is the RNA world hypothesis, which posits that RNA evolved before DNA and proteins from free-floating nucleotides in the early "primordial soup." The hypothesis was aided in the 1980s by the discovery that certain RNA molecules (called ribozymes) may function as enzymes, whereas previously only proteins were believed to have catalytic ability. This discovery provided an explanation for how early RNA molecules might have first catalyzed their own replication and developed a range of enzymatic activities. Next, RNA molecules might have begun to catalyze the synthesis of proteins from amino acid molecules. Proteins are more versatile than nucleotides, as they can be built from 20 amino acids with unique side chains versus the four bases of nucleotides. Next, DNA might have been formed by reverse transcription of RNA, with DNA eventually replacing RNA as the storage form of genetic material because of the greater stability and dependability of its double helical structure. There are remaining difficulties with the RNA world hypothesis; however, the multifunctional nature of nucleotides does suggest the interconnectedness of life and its common origins.