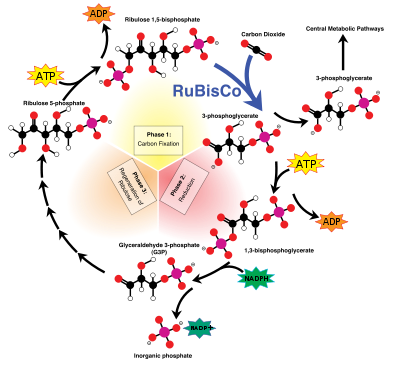 Overview of the Calvin cycle and carbon fixation

The Calvin cycle is an important and complicated series of biochemical reactions that take place in photosynthetic organisms and results in the fixing of carbon from carbon dioxide into organic molecules. One of the light-independent (dark) reactions used for carbon fixation, this metabolic pathway uses the energy stored in ATP and uses NADPH as a source of electrons (reduction potential), both provided during light-dependent reactions, to reduce carbon dioxide and fix it into the higher energy organic molecules. It is a "cycle" in that some of the product is recycled. The Calvin cycle takes place in the stroma of chloroplasts. It also is known as the Calvin–Benson-Bassham cycle (CBB cycle), reductive pentose phosphate cycle, or C3 cycle.

The Calvin cycle is one of the most metabolic pathways on Earth. All of the carbon fixed by green plants, whereby relatively low-energy carbon dioxide molecules are converted into high-energy organic molecules, comes via this series of reactions. The coordination of this finely-tuned, complicated partway, involving several steps, a number of three- to seven-carbon molecules, a large 16-subunit enzyme, and other components, reflects on the stunning harmony found in nature.

Photosynthesis. The process of photosynthesis is the source of the carbon found in the organic compounds within the bodies of living organisms, as well as a means for capturing the energy from sunlight. Some of the light energy is stored in the form of adenosine triphosphate (ATP) and some of the energy is used to remove electrons from a substance such as water, with the electrons then used in the reactions to turn carbon dioxide into organic compounds. In plants, algae, and cyanobacteria, these reactions to produce organic compounds comprise the metabolic pathway known as the Calvin cycle.

Calvin cycle. The Calvin cycle is a series of biochemical redox reactions that take place in the stroma of chloroplasts in photosynthetic organisms. Essentially, the light-independent Calvin cycle, also known (erroneously) as the "dark reaction" or "dark stage," uses the energy from short-lived electronically excited carriers to convert carbon dioxide and water into organic compounds (Campbell et al. 2006). It also can be described in terms of three phases: (1) carbon fixation, (2) reduction, and (3) regeneration of RuBP.

Phase I: Carbon fixation. In the carbon fixation phase of the Calvin cycle, inorganic carbon in the form of carbon dioxide becomes incorporated into organic form. Essentially, carbon dioxide is reduced to provide a higher energy molecule. During this phase, a five-carbon, energy-rich sugar RuBP (ribulose 1,5-biphosphate) is produced. It is produced by reassembling two products of glycolysis: fructose 6-phosphate and glyceraldehyde 3-phosphate (G3P). After RuBP is produced, carbon dioxide reacts with RuBP to form a transient 6-carbon intermediate. This 6-carbon intermediate immediately splits into two molecules of three carbon 3-phosphoglycerate (PGA). It uses the enzyme ribulose biphosphate carboxylase oxygenase (called RuBisCo), which is a large 16-subunit enzyme.

Phase II: Reduction. In the second phase, reduction, PGA is reduced to G3P (glyceraldehye 3-phosphate) using ATP and NADPH. Some G3P (which has three carbons) leaves the Calvin cycle and is converted to glucose and other sugars. Note: two molecules of G3P (the output of carbon fixation and reduction) is needed to produce a six-carbon glucose molecule.

Phase III: Regeneration. While some G3P is shunted out of the Calvin cycle to produce glucose and other sugars, much of it is recycled in order to regenerate RuBP, to keep the cycle going.

The enzymes in the Calvin cycle are functionally equivalent to many enzymes used in other metabolic pathways such as gluconeogenesis and the pentose phosphate pathway, but they are to be found in the chloroplast stroma instead of the cell cytoplasm, separating the reactions. They are activated in the light (which is why the name "dark reaction" is misleading), and also by products of the light-dependent reaction. These regulatory functions prevent the Calvin cycle from being respired to carbon dioxide. Energy (in the form of ATP) would be wasted in carrying out these reactions that have no net productivity.

The sum of reactions in the Calvin cycle is the following:

Hexose (six-carbon) sugars are not a product of the Calvin cycle. Although many texts list a product of photosynthesis as C6H12O6, this is mainly a convenience to counter the equation of respiration, where six-carbon sugars are oxidized in mitochondria. The carbohydrate products of the Calvin cycle are three-carbon sugar phosphate molecules, or "triose phosphates," namely, glyceraldehyde-3-phosphate (G3P).

The Calvin cycle was discovered by Melvin Calvin, James Bassham, and Andrew Benson at the University of California, Berkeley by using the radioactive isotope carbon-14 (Bassham et al. 1950).

Steps of the Calvin cycle

Regeneration (Simplified versions of the Calvin cycle integrate the remaining steps, except for the last one, into one general step: the regeneration of RuBP. Also, one G3P would exit here.)

Thus, of 6 G3P produced, three RuBP (5C) are made, totaling 15 carbons, with only one available for subsequent conversion to hexose. This required 9 ATPs and 6 NADPH per 3 CO2.

Products of the Calvin cycle

The immediate products of one turn of the Calvin cycle are 2 glyceraldehyde-3-phosphate (G3P) molecules, 3 ADP, and 2 NADP+ (ADP and NADP+ are regenerated in the Light-dependent reactions). Each G3P molecule is composed of 3 carbons. In order for the Calvin cycle to continue, RuBP (ribulose 1,5-bisphosphate) must be regenerated. So, 5/6 carbon from the 2 G3P molecules are used for this purpose. Therefore, there is only 1 net carbon produced to play with for each turn. To create 1 surplus, G3P requires 3 carbons, and therefore 3 turns of the Calvin cycle. To make one glucose molecule (which can be created from 2 G3P molecules) would require 6 turns of the Calvin cycle. Surplus G3P can also be used to form other carbohydrates such as starch, sucrose, and cellulose, depending on what the plant needs (Russell et al. 2010).

In the Calvin cycle for the above, 18 ATP are also used and 12 NADPH.