John Calvin Coolidge, Jr. (July 4, 1872 – January 5, 1933) was the thirtieth President of the United States. Famed for his taciturn New England attitude and no-nonsense approach to governance, Calvin Coolidge served from 1923 to 1929. As the Republican governor of Massachusetts, Coolidge gained national attention for settling the Boston police strike in 1919. He became vice president under President Warren G. Harding, and then succeeded to the presidency when Harding died in office in 1923. He was re-elected in 1924. His second term, like his first, was characterized by a general satisfaction with the existing economic order.

Coolidge restored public confidence in the White House after the scandals of his predecessor's administration, and left office with considerable popularity. As his biographer later put it, "he embodied the spirit and hopes of the middle class, could interpret their longings and express their opinions. That he did represent the genius of the average is the most convincing proof of his strength."

Many later criticized Coolidge as part of a general criticism of laissez-faire government. His reputation underwent a renaissance during the Reagan administration, but the ultimate assessment of his presidency is still divided between those who approve of his reduction of the size of government and those who believe the federal government should be more involved in regulating the economy. Coolidge is perhaps best known for saying, "the business of America is business."

In 1905, Coolidge married Grace Anna Goodhue. They were opposites in personality: she was talkative and fun-loving while Coolidge was quiet and serious. They had two sons: John Coolidge, born in 1906; and Calvin Jr., born in 1908.

Coolidge was elected mayor of Northampton in 1910 and 1911, and was a member of the state senate from 1912 to 1915, serving as president of that body in 1914 and 1915. He was lieutenant governor of the state from 1916 to 1918, and governor from 1919 to 1920. In 1919, Coolidge gained national attention when he ordered the Massachusetts National Guard to forcefully end the Boston Police Department strike. He later wrote to labor leader Samuel Gompers, "There is no right to strike against the public safety by anybody, anywhere, anytime." 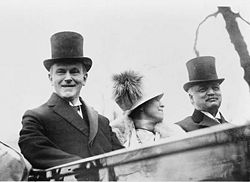 President Coolidge, his wife Grace, and Kansas senator Charles Curtis on their way to the U.S. Capitol building on inauguration day, March 4, 1925.

Harding was inaugurated as vice president on March 4, 1921, and served until August 2, 1923. Upon Harding's death, Coolidge became president. Coolidge was visiting at the family home, still without electricity or telephone, when he got word of Harding's death. His father, a notary public administered the oath of office in the family's parlor by the light of a kerosene lamp at 2:47 A.M. on August 3, 1923; Coolidge was re-sworn by Chief Justice of the United States William Howard Taft upon his return to Washington, D.C. 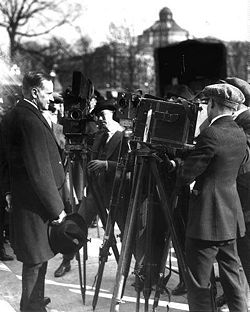 Coolidge was easily elected President of the United States in his own right in the election of 1924. Coolidge made use of the new medium of radio and made radio history several times while president: his inauguration was the first presidential inauguration broadcast on radio; on February 12, 1924, he became the first U.S. president to deliver a political speech on radio; and on February 22, he became the first president to deliver such a speech from the White House.

During Coolidge's presidency, the United States experienced the wildly successful period of economic growth known as the "Roaring Twenties." He was the last President of the United States who did not attempt to intervene in free markets, letting business cycles run their course—summed up in the quote "the business of America is business." He vetoed the proposed McNary-Haugen Farm Relief Bill, designed to allow the federal government to purchase agricultural surpluses. It should be noted that President Coolidge not only lowered taxes but also reduced the national debt.

Although some later commentators have criticized Coolidge as a doctrinaire laissez-faire ideologue, historian Robert Sobel offers some context based on Coolidge's sense of federalism: "As Governor of Massachusetts, Coolidge supported wages and hours legislation, opposed child labor, imposed economic controls during World War I, favored safety measures in factories, and even worker representation on corporate boards. Did he support these measures while president? No, because in the 1920s, such matters were considered the responsibilities of state and local governments."[1]

Coolidge opposed U.S. membership in the League of Nations, but the administration was not isolationist. Its most notable initiative was the Kellogg-Briand Pact of 1928, named for Coolidge's Secretary of State, Frank Kellogg, and for French foreign minister Aristide Briand. The treaty, ratified in 1929, committed signatories including the U.S., the United Kingdom, France, Germany, Italy, and Japan to "renounce war, as an instrument of national policy in their relations with one another." The treaty failed to prevent the coming Second World War, but provided the founding principles for international law after World War II. Also in 1928, Coolidge represented the U.S. at the Pan-American Conference in Havana, Cuba, making him the only sitting U.S. president to visit the country. Coolidge maintained the somewhat unpopular U.S. occupation of Nicaragua.

Coolidge did not seek re-election; he announced his decision with typical terseness: "I do not choose to run for President in 1928." After leaving office, he and wife Grace returned to Northampton, where his political career had begun. 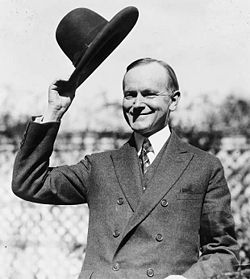 On June 2, 1924, President Coolidge signed a bill granting Native Americans full U.S. citizenship. Coolidge is shown above on October 22, 1924, holding a ceremonial hat given to him by the Smoki Indian tribe of Prescott, Arizona.

Coolidge appointed the following Justice to the Supreme Court of the United States: 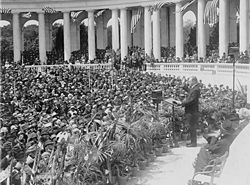 Coolidge addressing a crowd at Arlington National Cemetery in 1924.

After the presidency, Coolidge served as chairman of the non-partisan Railroad Commission, as honorary president of the Foundation of the Blind, as a director of New York Life Insurance Company, as president of the American Antiquarian Society, and as a trustee of Amherst College.[2] Coolidge received an honorary doctor of laws from Bates College in Lewiston, Maine.

Coolidge published an autobiography in 1929 and wrote a syndicated newspaper column, "Calvin Coolidge Says," from 1930 to 1931. He died suddenly of coronary thrombosis at his home in Northampton on January 5, 1933, at the age of 60. Prior to his death, Coolidge felt disappointed about Hoover's re-election defeat, after which his health began to decline very rapidly. Shortly before his death, Coolidge confided to an old friend: "I feel I am no longer fit in these times."

Coolidge is buried beneath a simple headstone in Plymouth Notch, Vermont, where the family homestead is maintained as a museum. The state of Vermont dedicated a new historic site visitors' center nearby to mark Coolidge's 100th birthday on July 4, 1972.

Although Coolidge was known to be a skilled and effective public speaker, in private he was a man of few words and was therefore commonly referred to as "Silent Cal." It is said that a White House dinner guest once made a bet with her friends that she could get the president to say at least three words during the course of the meal. Upon telling Coolidge of her wager, he replied "You lose."[3] However, another one of Coolidge's dinner guests had this to say: "I cannot help feeling that persons who complained about his silence as a dinner partner never really tried to get beyond trivialities to which he did not think it worth while to respond."

Prior to his election in 1924, Coolidge's younger son, Calvin, Jr., contracted a blister from playing tennis on the White House courts. The blister became infected, and Calvin, Jr. died. After that, Coolidge became even more withdrawn. People who knew the President said he never fully recovered from his son's death. He said that "when he died, the glory of the Presidency went with him."

His withdrawn nature was also the inspiration for the mnemonic, "Cool Cal."

Retrieved from https://www.newworldencyclopedia.org/p/index.php?title=Calvin_Coolidge&oldid=1095257
Categories:
Hidden category:
This page was last edited on 13 January 2023, at 00:25.
Content is available under Creative Commons Attribution/Share-Alike License; additional terms may apply. See Terms of Use for details.