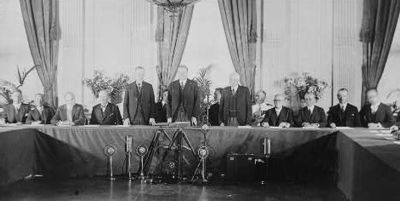 President Calvin Coolidge, Herbert Hoover, and Frank B. Kellogg, standing, with representatives of the governments who have ratified the Treaty for Renunciation of War (Kellogg-Briand Pact), in the East Room of the White House.

The Kellogg-Briand Pact, also known as the Pact of Paris after the city where it was signed on August 27, 1928, was an international treaty "providing for the renunciation of war as an instrument of national policy." It failed in its purpose but was significant for later developments in international law. It was named after the American secretary of state Frank B. Kellogg and French foreign minister Aristide Briand, who drafted the pact.

In its original form, the Pact of Paris was a renunciation of war between France and the United States. However, Frank B. Kellogg, then U.S. Secretary of State, wanted to avoid any involvement in another European war; Kellogg thus responded with a proposal for a multilateral pact against war open for all nations to become signatories. The Pact failed to prevent World War II but it did introduce into international law the notion of crime against peace and it was for committing this crime that the Nuremberg Tribunal sentenced a number of persons responsible for starting World War II. The ideal of ending war informed the Charter of the United Nations, and is in theory binding on all member states. The weakness of the Pact was that it made no provision for policing conformity, and did not take account of the fact that nations will act in what they perceive to be their best interests even if this means justifying war, despite the Pact. None of the post–World War I peace keeping initiatives did much to examine the causes of war. One aim of the Pact was to include the United States in European and world peace keeping because the U.S. had not joined the League of Nations.

The 1927 Kellogg-Briand Pact was concluded outside the League of Nations, and remains a binding treaty under international law. In the United States, it remains in force as federal law (see U.S. Const. art. VI).

As a practical matter, the Kellogg-Briand Pact did not live up to its aim of ending war, and in this sense it made no immediate contribution to international peace and proved to be ineffective in the years to come; the Japanese invasion of Manchuria in 1931, the Italian invasion of Ethiopia in 1935, and the German invasion of Poland in 1939, were prime examples of this. However, the pact is an important multilateral treaty because, in addition to binding the particular nations that signed it, it has also served as one of the legal bases establishing the international norms that the threat or use of military force in contravention of international law, as well as the territorial acquisitions resulting from it are unlawful.[2]

Notably, the pact served as the legal basis for the creation of the notion of crime against peace—it was for committing this crime that the Nuremberg Tribunal sentenced a number of persons responsible for starting World War II.

The interdiction of aggressive war was confirmed and broadened by the United Nations Charter, which states in article two, paragraph four that

"All Members shall refrain in their international relations from the threat or use of force against the territorial integrity or political independence of any state, or in any other manner inconsistent with the Purposes of the United Nations."

The consequence of this is that after World War II, nations have been forced to invoke the right of self-defense or the right of collective defense when using military action and have also been prohibited from annexing territory by force.[3]

Retrieved from https://www.newworldencyclopedia.org/p/index.php?title=Kellogg-Briand_Pact&oldid=1081057
Categories:
This page was last edited on 5 October 2022, at 17:20.
Content is available under Creative Commons Attribution/Share-Alike License; additional terms may apply. See Terms of Use for details.