Samuel Gompers (January 26, 1850 - December 13, 1924) was an American labor and political leader. He was born in England, to a Jewish family which emigrated to America when Samuel was 13 years old.

Educated through the difficult life of an American emigrant in the late 1800s, Gompers became socially active in the area of labor. Influenced by European socialist thinkers, Gompers operated with the concept that capitalists had no concern for the common person, other than what profit could be made by him despite the often deplorable conditions of the workplace. This translated to his activities in organizing workers to stand up to unjust conditions.

A hero to some and a villain to others, Gompers founded the American Federation of Labor (AFL) and held the position as president of the organization for all but one year, from 1886 until his death in 1924. The AFL united with the Congress of Industrial Organizations in 1955, and is commonly known as the AFL-CIO.

Gompers died in Texas, in 1924, after becoming ill while in Mexico, attending a presidential inauguration.

Samuel Gompers was born on January 26, 1850, in London, England, into a Jewish family which had recently arrived from Holland. He left school at age ten to apprentice first as a shoemaker, then as a cigar maker alongside his father. The family emigrated to New York City in 1863, settling on the Lower East Side of the city.

The family found life difficult in the crowded slums of New York. Though there were a few large cigar making shops with perhaps as many as 75 employees, there were many more sweatshops, perhaps thousands, some of which also housed the families that worked them. Thousands of young children labored in these sweatshops and the city's factories, helping their parents support their families.[1]

In 1864, Gompers joined Local 15 of the United Cigar Makers. He married Sophia Julian in 1867, at the age of seventeen, with whom he would eventually have twelve children. At his job and in his local union, Gompers socialized with a group of older émigré socialists and labor reformers whom he would always credit for his commitment to trade unionism as the essential vehicle for bringing about social reform.

He became a naturalized citizen of the United States in 1872. 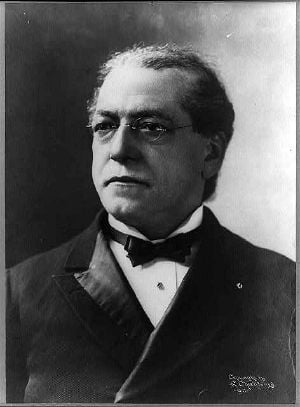 Gompers was self educated, aided by the non-stop discussions among the workers rolling cigars. "In fact," said Gompers, "these discussions in the shops were more like public debating societies or what we call these days 'labor forums'" (ILR Press, 1984, pg 81).

The coworkers made Gompers their reader, as he devoured newspapers and German language socialist pamphlets. In 1877, the union had collapsed and Gompers and his friend, Adolph Strasser, using Local 144 as a base, rebuilt the Cigar Makers' Union, introduced a hierarchical structure, and implemented programs for strike and pension funds, which were paid for by charging high membership dues.

Gompers told the workers they needed to organize because wage reductions were almost a daily occurrence. The capitalists were only interested in profits, he maintained, "and the time has come when we must assert our rights as workingmen. Every one present has the sad experience, that we are powerless in an isolated condition, while the capitalists are united; therefore it is the duty of every Cigar Maker to join the organization…. One of the main objects of the organization," he concluded, "is the elevation of the lowest paid worker to the standard of the highest, and in time we may secure for every person in the trade an existence worthy of human beings" (Antioch Press, 1963, pg 22).

His philosophy of labor unions centered on economic ends for workers, such as higher wages, benefits, and job security. His goal was to achieve these without political action or affiliation by the union, but rather through the use of strikes, boycotts, etc.

Gompers viewed unions as simply the labor component of a business, neither superior nor inferior to the management structure. This belief led to the development of procedures for collective bargaining and contracts between labor and management, which are still in use today.

Gompers had the formula for militant unionism that could survive lost strikes. The workers had to believe the union would increase the bottom line. The success of this approach led to its adoption by many other unions throughout the late 1800s. The rival Knights of Labor had a grander vision, but did not focus on the incomes of the members, and it collapsed.

Leading the American Federation of Labor

Gompers helped found the Federation of Organized Trades and Labor Unions in 1881, as a coalition of like-minded unions. In 1886, it was reorganized into the American Federation of Labor, with Gompers as its president. He would remain president of the organization until his death (with the exception of one year, 1895); thirty-seven years.

Under Gompers's tutelage, the AFL coalition gradually gained strength, undermining that previously held by the Knights of Labor, which as a result had almost vanished by 1900.

As an organization, the AFL was a decentralized group which recognized the autonomy of each of its member national craft unions. Individual workers were not members of the AFL, but instead of the affiliated local or national union. From its beginning, the AFL emphasized the organization of skilled workers into "craft unions" (composed of a single occupation such as painters or electricians), as opposed to "industrial unions." The AFL was a relatively conservative political force within the labor movement, and was opposed to the idea of a labor party. Nonetheless, the union helped secure laws against child labor, and laws for shorter hours, higher wages, workmen’s compensation, an eight hour day for government employees, and the exemption of labor from antitrust legislation. The AFL eventually became the largest labor federation in the United States.[2]

Gompers's insistence against political affiliation and radicalism in the AFL, combined with its tendency to cater to skilled labor over unskilled, led indirectly to the formation of the Industrial Workers of the World organization in 1905, which tried with limited success to organize unskilled workers.

Samuel Gompers sought to transform the economic, social and political status of America's workers through building the country's labor movement into a powerful enough force to affect change. His leadership in this movement exemplified the three principles he championed.

First, he advocated craft or trades unionism, which restricted union membership to wage earners and grouped workers into locals based on their trade or craft identification, rather than a generalized labor movement.

Second, Gompers' unionism focused on primarily economic rather than political reform as a means of securing workers' rights and welfare. His confidence in legislative reform was severely weakened in the 1880s after the New York Supreme Court overturned two laws regulating tenement production of cigars that he had helped pass.

Third, as Gompers increasingly came to believe in his later years, when political action was necessary, he urged labor to follow a course of "political nonpartisanship." He believed that the best way to strengthen the political leverage of labor was to articulate an independent political agenda and seek the endorsement of existing political parties for the agenda, as well as to mobilize members to vote for those supporting labor's agenda.[3]

Gompers raised the organization to some power and material improvement, but at the same time, there are those who believe he prevented the growth and development of the membership towards a higher aim or purpose, even doing harm to the American workers. It is said that Gompers' organization failed to grasp the social abyss which separated labor from its masters, an abyss not believed bridgable by the struggle for simply immediate material gains. Gompers, it has been said, did not further the goal of complete industrial and social emancipation, instead allowing the labor force to remain dependent upon the privileged class. Gompers, according to some critics, created an aristocracy of labor, a trade union trust, indifferent to the needs of the rest of the workers outside of the organization.[4]

During the First World War, Gompers was a strong supporter of the war effort. He was appointed by President Woodrow Wilson to the powerful Council of National Defense, where he instituted the War Committee on Labor. He was an attendee at the Paris Peace Conference in 1919, as a labor adviser.

The notion of "yellow peril" manifested itself in government policy with the U.S. Chinese Exclusion Act of 1882, which was prompted by the fear that the mass immigration of Asians threatened white wages, standards of living and indeed, Western civilization itself. Gompers contributed to the yellow peril fears of the era claiming, in reference to the Chinese Exclusion Act, "…the superior whites had to exclude the inferior Asiatics, by law, or, if necessary, by force of arms."[5]

Gompers held an interest in international labor issues. At the conclusion of World War I, he attended the Versailles Treaty negotiations, where he was instrumental in the creation of the International Labor Organization (ILO) under the League of Nations.

A supporter of trade unionism in Mexico, Gompers, though elderly and in failing health, went to Mexico City to attend the inauguration of Mexico's reform President Calles. While there he also attended the Congress of the Pan-American Federation of Labor. It was here that his final collapse occurred. He was rushed to a hospital in San Antonio, Texas where he died on December 13, 1924, at the age of 74.[6] He is buried at the Sleepy Hollow Cemetery in Sleepy Hollow, New York.