Samuel Jones Tilden (February 9, 1814 – August 4, 1886) was the Democratic candidate for the United States presidency in the disputed election of 1876, the most controversial American election of the nineteenth century. A political reformer, he was a Free Soil Democrat who worked closely with the New York City business community, led the fight against the corruption of Tammany Hall, and fought to keep taxes low. Prior to, and during the American Civil War, he was also a member of the anti-slavery wing of the Democratic Party. His loss in the presidential election helped to bring about the end of Reconstruction in the South and the withdrawal of federal troops from the area. He was never married and had no children during his lifetime. He was renowned for rooting out corruption, and for his personal integrity. Most of his estate was bequeathed to New York City to establish the New York Public Library.

Tilden was born in New Lebanon in New York State. He studied at New York University (then officially named the University of the City of New York), earning a bachelor's degree before graduating from New York University School of Law (then known as “the School of Law of the University of the City of New York”) and was admitted to the bar in 1841 and became a skilled corporate lawyer, with many railroad companies as clients in the shaky railroad boom decade of the 1850s. His legal practice, combined with shrewd investments, made him rich.

In 1848, largely on account of his personal attachment to Martin Van Buren, he participated in the revolt of the “Barnburners” or Free-Soil faction of the New York Democrats. He was among the few such who did not join the Republican Party and, in 1855, was the candidate of the anti-slavery faction for Attorney General of New York State.

After the Civil War, Tilden became chairman of the Democratic State Committee and soon came into conflict with the notorious Tweed ring of New York City. Corrupt New York judges were the ring's tools, and Tilden, after entering the New York State Assembly in 1872 to promote the cause of reform, took a leading part in the judges' impeachment trials. By analyzing the bank accounts of certain members of the ring, he obtained legal proof of the principle on which the spoils had been divided. As a reform-spirited Governor in 1874, he turned his attention to a second set of plunderers, the “Canal Ring,” made up of members of both parties who had been systematically robbing New York State through the maladministration of its canals. Tilden succeeded in breaking them up.

His successful service as governor gained him the presidential nomination. 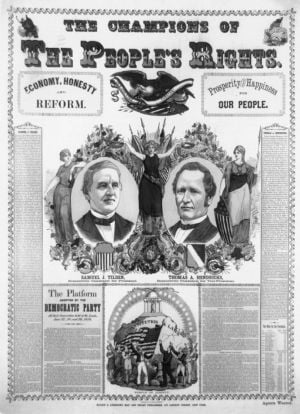 Campaign poster for the election of 1876.

During the 1876 presidential election, Tilden won the popular vote over his Republican opponent, Rutherford B. Hayes, proving that the Democrats were back in the political picture following the Civil War. But the result in the Electoral College was in question because the states of Florida, Louisiana, and South Carolina each sent two sets of Electoral Votes to Congress. (There was separately a conflict over one elector from Oregon, who was disqualified on a technicality.)

Republicans had taken over the state governments in the South during Reconstruction, but were unpopular with the overwhelmingly Democratic white southerners, many of whom resented what they perceived as interference from the North and blamed the Republicans for the Civil War. As a result, one set of Electoral Votes from each of these three states had cast their ballots for the Republican Hayes, and another set had cast their ballot for the Democrat Tilden. Without these three states, Tilden had won 184 Electoral Votes, but needed 185 to win the Presidency. If he had taken even one state, he would have become President. However, if Hayes were to win all the contested votes, he would receive 185 Electoral Votes and win the election. Because the Constitution does not address how Congress is to handle such a dispute, a constitutional crisis appeared imminent.

While the Republicans boldly claimed the election, Tilden mystified and disappointed his supporters by not fighting for the prize or giving any leadership to his advocates. Instead he devoted more than a month to the preparation of a complete history of the electoral counts over the previous century to show it was the unbroken usage of Congress, not of the President of the Senate, to count the electoral votes.[1]

Congressional leaders tried to resolve the crisis by creating a 15-member Electoral Commission that would determine which set of votes were valid. The Commission consisted of five members from the Republican-controlled Senate (three Republicans and two Democrats), and five from the Democratic-controlled House of Representatives (three Democrats, two Republicans). The remaining five members were chosen from the Supreme Court—originally two Republicans, two Democrats, and independent Justice David Davis. Davis, however, was elected to the US Senate from Illinois and resigned from the Court. Justice Joseph P. Bradley, a Republican, was named to replace him. The Commission voted 8-7 along party lines to award all the votes to Hayes. The dispute, however, did not end, as Democrats threatened to filibuster in the Senate. Eventually, a Compromise of 1877 was reached whereby the Democrats agreed to Hayes' election and he agreed to withdraw all federal troops in the South, bringing an end to Republican Reconstruction in the South. Upon his defeat, Tilden said, "I can retire to public life with the consciousness that I shall receive from posterity the credit of having been elected to the highest position in the gift of the people, without any of the cares and responsibilities of the office." 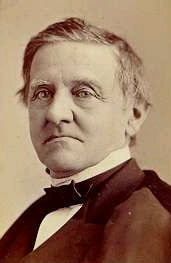 In 1878, the Republican New York Tribune published a series of telegraphic dispatches in cipher, accompanied by translations, by which it attempted to prove that during the crisis following the 1876 election, Tilden's campaign manager—his nephew, using Tilden's house as a base—had been negotiating for the purchase of the Electoral Votes of South Carolina and Florida. Tilden denied emphatically all knowledge of these dispatches, while not denying his nephew had sent them. The 'Cipher Dispatches' seriously weakened his reputation.

Tilden counseled his followers to abide quietly by the result. His health failed after 1876 and he retired from politics, living as a recluse at his country home, Greystone, near Yonkers, New York. He died a bachelor in 1886. He confided to a friend that he had never slept with a woman in his life.

Of his fortune (estimated at $6 million) approximately $4 million was bequeathed for the establishment and maintenance of a free public library and reading-room in the City of New York; but, as the will was successfully contested by relatives, only about $3 million of the bequest was applied to its original purpose; in 1895, the Tilden Trust was combined with the Astor and Lenox libraries to found the New York Public Library, whose building bears his name on its front.

The Samuel J. Tilden House at 15 Gramercy Park South, where he lived from 1860 until his death is now used by the National Arts Club.

Samuel J. Tilden was an important U.S. politician during his lifetime. He held several notable offices, but he is best known for his loss to Rutherford B. Hayes in the 1876 presidential election. The electoral vote was unclear and an unprecedented decision was required to settle the outcome. After much debate, Hayes was allowed to capture the election under the stipulation that federal Reconstruction end in the South. Troops were removed and the former rebel states were allowed control over their own affairs. The outcome of the election thus held several implications for the American people. The impact of the decision is still debated today.

As a politician, Tilden was soft-spoken and timid, not domineering. He overcame these personality traits with his aptitude and skill. He was never an extremely popular figure with the American voting public, but he did win their admiration.

There is a Tilden Street in an area of Wichita Falls, Texas, where the streets are named for the U.S. presidents Van Buren through Garfield (excluding Pierce, Andrew Johnson and Lincoln). Tilden runs parallel between Grant Street and Hayes Street, as if he had won the presidency in 1876.

There also is a Tilden Street in the city of Richmond, Virginia, as well as Washington, D.C.

There is at least one school named in his honor in the United States, Samuel Tilden High School in Brooklyn, New York.

The former United States Army installation, Fort Tilden, on the Rockaway Peninsula in New York City (now part of the Gateway National Recreation Area), is named after him.

In 1887, the town of Burnett in Nebraska was re-named Tilden by the U.S. Post Office after Samuel J. Tilden. The change was made because mail from nearby Bennett kept getting mixed up with Burnett's mail.

In the alternate history novel How Few Remain by Harry Turtledove, Tilden is defeated for a second term as President in 1881 losing to James G. Blaine.