The New York Public Library (NYPL) is one of the leading libraries in the world and one of three public library systems serving New York City. The other New York City public systems are those of Brooklyn and Queens. The online catalogues of the Library are known by the acronyms CATNYP for the four principal research libraries and LEO for the dozens of neighborhood branch libraries.

The Public Library's main building is the crowning achievement of the Beaux-Arts architectural firm of Carrere and Hastings. Its holdings include a Gutenberg Bible and a Philosophiae Naturalis Principia Mathematica.

Public libraries, which are free and open to the public, did not exist until the nineteenth century; the NYPL was a major institution that pioneered the way for public libraries. To this day, its mission to serve the public. The NYPL has both first class research centers and a network of branch libraries that serve local communities, free of charge to the public.

In the late nineteenth century, New York City had two reference libraries open to the public: the Astor Library, founded by a $400,000 bequest of John Jacob Astor (1763–1848), which had opened in 1849, and the Lenox Library, founded by James Lenox (1800–1880), a book collector, which stood on the Fifth Avenue site now occupied by the Frick Collection.

John Bigelow (1817–1911), a New York attorney, was a trustee of the Tilden will, and formulated a plan to combine the resources of the financially-strapped Astor and Lenox libraries with the Tilden bequest to form "The New York Public Library, Astor, Lenox and Tilden Foundations." This entity came into being as a private foundation on May 23, 1895.

The library consolidated with The New York Free Circulating Library in February, 1901, and Andrew Carnegie donated $5.2 million to construct branch libraries, with the proviso that the City of New York fund their maintenance and operations. The New York Public Library was thus made possible by the combined efforts of city government and private philanthropy. 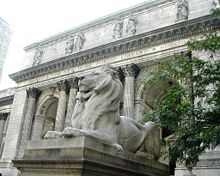 At the entrance to the New York Public Library. 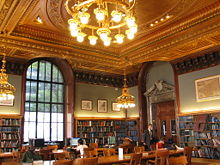 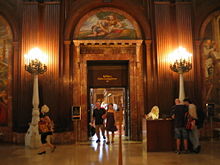 Entrance to the Public Catalog Room

The main Research Library (now known as the Humanities and Social Science Library) was built on Fifth Avenue in Manhattan between 40th and 42nd Streets on the former site of the Croton Reservoir, and was dedicated on May 23, 1911 and opened the next day. The famous lions guarding the entrance were sculpted by Edward Clark Potter. They were originally named Leo Astor and Leo Lenox, in honor of the library's founders. These names were transformed into Lord Astor and Lady Lenox (although both lions are male). In the 1930s they were nicknamed "Patience" and "Fortitude" by Mayor Fiorello LaGuardia. He chose these names because he felt that the citizens of New York would need to possess these qualities to see themselves through the Great Depression. Patience is on the south side (the left as one faces the main entrance) and Fortitude on the north.

The famous main reading room of the Research Library, room 315, is a majestic 78 feet (23.8 m) wide by 297 feet (90.5 m) long, with 52 feet (15.8 m) high ceilings. It is lined with thousands of reference books on open shelves along the floor level and along the balcony; lit by massive windows and grand chandeliers; furnished with sturdy wood tables, comfortable chairs and brass lamps; and equipped with computers with access to library collections and the Internet and docking facilities for laptops. Readers study books brought to them from the library's closed stacks. There are special rooms for notable authors and scholars, many of whom have done important research and writing at the Library. Many people, out of work during the Great Depression, used the library to give themselves the equivalent of a university education.

In the 1980s the library added more than 125,000 square feet (12,000 m²) of space to its storage capacity. This expansion required a major construction project in which Bryant Park, directly west of the library, was closed to the public and excavated. The new library facilities were built below ground level. The park was then restored on top of the underground facilities and re-opened to the public.

The Humanities and Social Sciences Library on 42nd Street is one of four libraries that comprise NYPL's Research Libraries. The others are the Schomburg Center for Black Research and Culture, located at 135th Street and Lenox Avenue in Harlem; the New York Public Library for the Performing Arts, located at Lincoln Center, and the Science, Industry and Business Library (SIBL) located in the former B. Altman Building at 34th Street and Madison Avenue. In addition to their reference collections, the Library for the Performing Arts and the SIBL also have circulating components that are administered by the NYPL's Branch Libraries system.

A panoramic view of one of the twin Research Rooms

The NYPL maintains 86 neighborhood branch libraries including five central circulating libraries throughout The Bronx, Manhattan, and Staten Island (The Mid-Manhattan Library, The Donnell Library Center, The Andrew Heiskell Braille and Talking Book Library, the circulating collections of the Science, Industry and Business Library, and the circulating collections of the Library for the Performing Arts) are all in or near midtown Manhattan and offer a wide range of in-depth collections, programs, and services, including the renowned Picture Collection at Mid-Manhattan Library and the Media Center at Donnell. 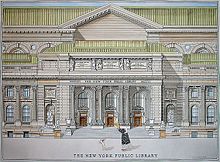 The New York Public library has a telephone-reference system that was organized as a separate library unit in 1968 and remains one of the largest. Located in the Mid-Manhattan Library branch at 455 Fifth Avenue, the unit has ten researchers with degrees ranging from elementary education, chemistry, mechanical engineering and criminal justice, to a Ph.D. in English literature. They can consult with as many as 50 other researchers in the library system.

Under their rules, each inquiry must be answered in under five minutes, meaning the caller gets an answer or somewhere to go for an answer—like a specialty library, trade group or Web site. Researchers cannot call back questioners. Although the majority of calls are in English, the staff can get by in Chinese, Spanish, German and some Yiddish. Specialty libraries, like the Slavic and Baltic division, can lend a hand with, for example, Albanian.

Every day, except Sundays and holidays, between 9 A.M. and 6 P.M. Eastern Standard Time, anyone, of any age, from anywhere in the world can telephone and ask a question. Chat service is available 24 hours, 7 days a week. Users also send queries via email and receive a response usually within two working days. The library staff will not answer crossword or contest questions, do children's homework, or answer philosophical speculations.[1]

The NYPL gives cardholders free access from home to thousands of current and historical magazines, newspapers, journals and reference books in subscription databases, including EBSCOhost, which contains full text of major magazines; full text of the New York Times (1995-present), Gale's Ready Reference Shelf which includes the Encyclopedia of Associations and periodical indexes, Books in Print; and Ulrich's Periodicals Directory.

The NYPL Digital Gallery is a database of half a million images digitized from the library's collections. The Digital Gallery was named one of TIME Magazine's 50 Coolest Websites of 2005 and Best Research Site of 2006 by an international panel of museum professionals.

Other databases available only from within the library include Nature, IEEE and Wiley science journals, Wall Street Journal archives, and Factiva.

Private libraries, some of which can be used by the public, are listed in Directory of Special Libraries and Information Centers (Gale)