Carnegie libraries are libraries that were built with money donated by Scottish-American businessman and philanthropist Andrew Carnegie. Over 2,500 Carnegie libraries were built, including those belonging to public and university library systems. Carnegie earned the nickname Patron Saint of Libraries.

The first of Carnegie's public libraries opened in his hometown, Dunfermline, Scotland, in 1883. As with most of the others, Carnegie's name did not appear on the building. Rather, he had a motto—"Let there be light"—inscribed over the entrance. His first library in the United States was built in 1889 in Braddock, Pennsylvania, home to one of the Carnegie Steel Company's mills. The last public library funded through Carnegie's generosity was the Wyoming Branch, completed in 1930 in Philadelphia, Pennsylvania. At 231 East Wyoming Avenue, it continues as an active branch of the Free Library of Philadelphia.[1]

Of the 2,509 libraries funded between 1883 and 1929, 1,689 were built in the United States, 660 in Britain and Ireland, 156 in Canada, and others in Australia, New Zealand, Serbia, the Caribbean, and Fiji. Very few towns that requested a grant and agreed to his terms were refused. When the last grant was made in 1919, there were 3,500 libraries in the United States, nearly half of them paid for by Carnegie.

In the early twentieth century, a Carnegie library was the most imposing structure in hundreds of small American communities from Maine to California. Most of the library buildings were unique, displaying a number of different Beaux-Arts and other architectural styles, including Italian Renaissance, Baroque, Classical Revival and Spanish Colonial. Each style was chosen by the community and was typically simple and formal, welcoming patrons to enter through a prominent doorway, nearly always accessed via a staircase. The entry staircase symbolized a person's elevation by learning. Similarly, outside virtually every library was a lamppost or lantern to symbolize enlightenment.

Detail of the entrance to the Carnegie library pictured above.

Books and libraries were always an important part of Carnegie's life, beginning with his childhood in Scotland. There he listened to readings and discussions of books from the Tradesman's Subscription Library which his father helped create. Later, in the United States, while working for the local telegraph company in Allegheny, Pennsylvania, Carnegie borrowed books from the personal library of Colonel James Anderson, who opened the collection to his workers every Saturday. In his autobiography, Carnegie credited Anderson with providing an opportunity for "working boys" (that some said should not be "entitled to books") to acquire the knowledge to improve themselves.[2]

Carnegie's personal experience as an immigrant, who with help from others worked his way into a position of wealth, reinforced his belief in a society based on merit, where anyone who worked hard could become successful. This conviction was a major element of his philosophy of giving in general, and of his libraries as its best known expression.

Carnegie Formula and fields for philanthropy

Levenshulme Library a 'Carnegie Library' in a small Manchester, UK suburb, was built in 1904. 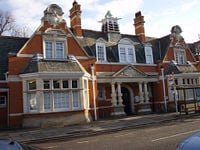 The Carnegie Library in Teddington, England was built in 1906.

Carnegie believed in giving to the "industrious and ambitious; not those who need everything done for them, but those who, being most anxious and able to help themselves, deserve and will be benefited by help from others."[3] His other stated "best fields" for donating surplus wealth were universities, health care institutions, public parks, assembly halls, public swimming pools, and churches.

Nearly all of Carnegie's libraries were built according to "The Carnegie Formula," which required a kind of matching from the town that received the donation. It must:

The amount of money donated to most communities was based on U.S. Census figures and averaged approximately $2 per person. While there were some communities that refused to seek a grant, as some people considered Carnegie's money to be tainted by his business practices or disdained the libraries as personal memorials, many communities were eager for the chance to build public institutions. James Bertram, Carnegie's personal secretary who ran the program, was never without requests.

The impact of Carnegie's library philanthropy was maximized by his timing. His offers came at a peak of town development and library expansion in the US. By 1890, many states had begun to take an active role in organizing public libraries, and the new buildings filled a tremendous need. Interest in libraries was also heightened at a crucial time in their early development by Carnegie's high profile and his genuine belief in their importance.[4] 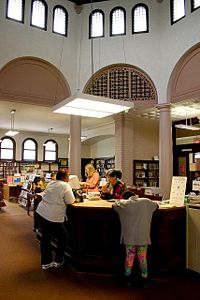 Design of the libraries was to encourage communication with the librarian, and also to create an opportunity for people to discover books on their own. "The Carnegie libraries were important because they had open stacks which encouraged people to browse....People could choose for themselves what books they wanted to read," according to Walter E. Langsam, an architectural historian and teacher at the University of Cincinnati. Before Carnegie, patrons had to ask a clerk to retrieve books from closed stacks.[5]

While hundreds of the library buildings have been converted into museums, community centers, office buildings and residences—or demolished—more than half of those in the United States still serve their communities as libraries over a century after their construction, many in middle- to low-income neighborhoods. For example, Carnegie libraries still form the nucleus of the New York Public Library system in New York City, with 31 of the original 39 buildings still in operation. Also, the main library and seven branches of the Pittsburgh public library system are Carnegie libraries. The public library was named the Carnegie Library of Pittsburgh.

In the late 1940s, the Carnegie Corporation of New York arranged for microfilming of the correspondence files relating to Andrew Carnegie's gifts and grants to communities for the public libraries and church organs. They then discarded the original materials. The microfilms are open for research as part of the Carnegie Corporation of New York Records collection, residing at the Columbia University Rare Book and Manuscript Library. Unfortunately archivists did not microfilm photographs and blueprints of the Carnegie Libraries—these were simply discarded. The number and nature of documents within the correspondence files varies widely. Such documents may include correspondence, completed applications and questionnaires, newspaper clippings, illustrations, and building dedication programs.

Beginning in the 1930s, some libraries were meticulously measured, documented and photographed under the Historic American Building Survey (HABS) program of the National Park Service, and other documentation has been collected by local historical societies. Many of the Carnegie libraries in the United States, whatever their current uses, have been recognized by listing on the National Register of Historic Places.

Distribution of U.S. Carnegie libraries in 1920 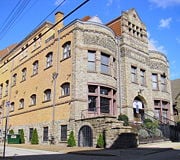 First in the USA 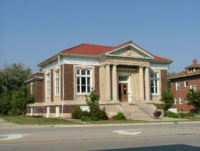 The Carnegie Library in Ridge Farm, Illinois, opened in 1910, is in an Italianate Georgian style

Retrieved from https://www.newworldencyclopedia.org/p/index.php?title=Carnegie_library&oldid=1095317
Categories:
Hidden category:
This page was last edited on 13 January 2023, at 00:56.
Content is available under Creative Commons Attribution/Share-Alike License; additional terms may apply. See Terms of Use for details.