Carnivora is an order of mammals that includes such familiar groups as dogs, cats, bears, and seals. There are over 260 species in Carnivora.

The word "Carnivora" comes from the Latin words carō, meaning "flesh," and vorāre, meaning "to devour," and thus means "to devour flesh." Carnivores in general get most of their food by killing and eating other animals, including other mammals, birds, insects, and fish. However, many are omnivores and get a large part of their nutrition from plant foods. The giant panda (Ailuropoda melanoleuca) and a few other members of Carnivora are almost exclusively herbivores. (The panda occasionally eats fish, eggs, and insects.)

Carnivores are a key part of the remarkable harmony in nature, where an incredible diversity of plants, animals, and microorganisms exist, all in stunning balance and for millions of years. One explanation for this continuing harmony is the fact that the various taxa not only seek their own individual purpose (survival, maintenance, reproduction, etc.), but also serve a purpose for the whole. In the case of carnivores, by consuming various animals lower in the food chain, they help to maintain acceptable population levels. Removal of carnivores (and many are apex predators, at the end of the food chain) and the prey populations could explode in numbers and overwhelm the ecosystem. Human activities sometimes result in removal of important carnivores, and even extinction of particular populations or species, disrupting the delicate balance.

Members of Carnivora are placed into two main sub-orders: Feliformia (cat-like) and Caniformia (dog-like). Some of the major sub-groups within Feliformia are the families Felidae (cats), Hyaenidae (hyenas), and Herpestidae (mongooses). Some of the major sub-groups within Caniformina are the families Canidae (dogs, wolves, and foxes), Ursidae (bears), Mustelidae (weasels, badgers, and otters), and Mephitidae (skunks), as well as the pinnipeds (seals, sea lions, and walruses). 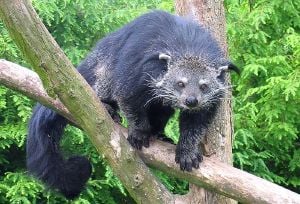 Carnivores have a characteristic skull shape. Their dentition includes prominent canines and carnassials, while the molars are blade-like and more suited for cutting than grinding. Carnivores, unlike many other mammals, can not move their lower jaws from side to side but can only open and close their mouths.

Except for the aquatic pinnipeds, which have both front and hind limbs in the form of flippers, carnivores walk on all four legs. Some, like cats and dogs, walk on their toes, and some, like bears and raccoons, on the flat of the feet like humans. The bodies of most are covered with thick fur. Almost all carnivores have tails, which are used in various ways by different species. The binturong, or bearcat (Artictis binturong), has a prehensile tail (Voelker 1986).

Most carnivores bear young once a year. The number of young ranges from one, in the Pinnipedia, to as many as 16 or more, in the African wild dog (Lycaon pictus). The young are born small and helpless and are looked after for a fairly long time by their mothers. In most cases, this includes time for learning hunting and other life skills. Some carnivores, such as wolves (Canis lupus) and lions (Panthera leo), live in groups and help each other rear and protect the young (Nowak 1983).

Carnivores are found in almost all land habitats over most of the world. Australia has no land carnivores except those introduced by humans, among them the dingo (Canus familiaris dingo), which is a feral dog introduced in prehistoric times, and cats and foxes, which were introduced later. All large native land mammals in Australia are marsupials. Pinnipeds are found in the coastal waters and shores of all continents, including Australia and Antartica (Voelker 1986).

Carnivores play an important role in nature by helping to control the numbers of other animal species. This protects the plants from overgrazing and keeps the ecosystem in balance. Another important role is eating the bodies of animals that have died.

Many of the larger carnivores can be dangerous to humans and to domestic animals, and have been killed or driven away from their habitats for that reason. On the other hand, carnivores play a vital role in keeping the population of rodents and other potentially destructive animals under control. Some carnivores are trapped and hunted for their fur, as well as for meat and for sport. Hunting and loss of habitat due to human activities have caused the extinction of some carnivore species and are now endangering others.

Two carnivores that have become very successful in partnership with humans are the domestic dog and cat (Canis familiaris and Felis catus). Other carnivores are popular attractions in zoos, circuses, and animal parks. 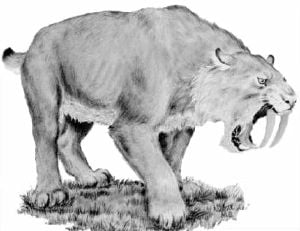 Older classification schemes divided the order Carnivora into two suborders, Fissipedia (which included the families of primarily land Carnivora) and Pinnipedia (which included the true seals, eared seals, and walrus). However, even at the time, it was recognized that the Fissipedia was a paraphyletic group: The pinnipeds were not the sister group to the fissipeds, but rather had arisen from among them.

Newer classification schemes have been able to integrate the findings from molecular techniques for discovering genetic relationships. They generally divide the Carnivora into the suborders Feliformia (cat-like) and Caniformia (dog-like), the latter of which includes the pinnipeds. The pinnipeds are part of a clade, known as the Arctoidea, which also includes the bears and the superfamily Musteloidea. The Musteloidea in turn consists of the mustelids, procyonids, skunks, and Ailurus. The dogs are the sister group to the entire arctoid assemblage; they are considered to have been the first of the extant (living) caniforms to split from the others.

The same studies resolve the position of Ailurus: The red panda is considered neither a procyonid nor an ursid, but rather forms a monotypic family with the other musteloids as its closest living relatives. The same study also suggests that the mustelids are not a primitive family, as was once thought. Their small body size is considered a secondary trait: The primitive body form of the arctoids was large, not small.

The exact position of the cats in relation to the other families is somewhat disputed. Nandinia, the African palm civet, seems to be the most primitive of all the feliforms and the very first to split from the others. The Asiatic linsangs of the genus Prionodon (traditionally placed in the Viverridae) might form a family of their own as well, as some recent studies indicate that Prionodon is actually the closest living relative to the cats.

The position of extinct Carnivora families is not clear. Recent studies suggest that the ancient families Miacidae and Viverravidae are not basal members of the Caniformia and Feliformia, so they are not the direct ancestors of any living Carnivora family (Wesley-Hunt and Flynn 2005).

The Miacidae is not even monophyletic, rather it appears to represent a paraphyletic array of stem taxa. Traditionally, the Miacidae and the Viverravidae have been classified in a third, extinct paraphyletic superfamily, the Miacoidea, from which the direct ancestors of the other two superfamilies arose.

The Nimravidae are sometimes seen as the most basal of all feliforms, and the first to split from the others. Other studies indicate that Barbourofelids forms a separate family, which is closely related to the true felids instead of being related to the Nimravids. The position of many extinct felids is not clear: They may or may not be true cats after all. The amphicyonids are the first of the caniforms to split off; they are not the sister group to the ursids (as most scientists once thought), but are rather an out group to all other caniforms.

The results of the same study (Wesley-Hunt and Flynn 2005) further suggest a much younger minimum age for the crown-clade Carnivora (the divergence age of the subclades Caniformia and Feliformia) than had been inferred in many previous studies: Middle-Eocene (ca. 43 million years ago), rather than early Paleocene (60 Ma). It remains unknown if the Creodonta are the closest relatives of the Carnivora, but it seems they are. They are united with the Pholidota and some extinct orders in the clade Ferae. 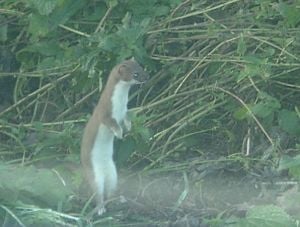 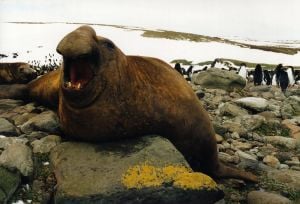 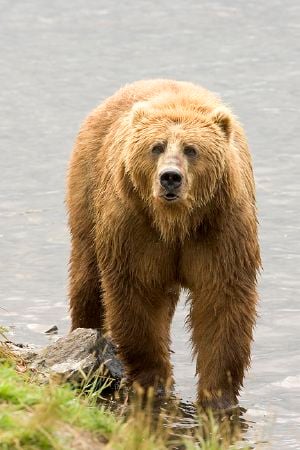 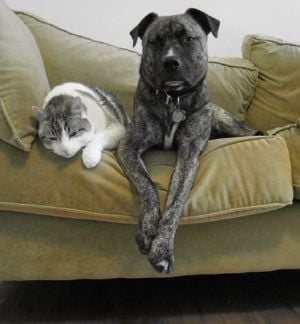