Procyonidae is a family of the order Carnivora, whose extant members are to some degree arboreal and are characterized by forefeet and hindfeet with five digits, short and curved claws, short rostums, unspecialized incisors, and small to medium size with medium to long tails. Sometimes known as the raccoon family, this taxon includes raccoons, coatis, kinkajous, olingos, ringtails and cacomistles, all of which are native only to the New World. However, some taxonomies include the red panda, which is native to China, although most authorities now put the red panda in Ursidae or its own family Ailuridae. This article will not include the red panda.

Procyonids inhabit a wide range of environments, and are generally omnivorous. While advancing their own individual functions (survival and reproduction), they also provide a larger function for the ecosystem and for humans. Ecologically, they are important components of food chains, consuming a wide variety of plant an animal matter and being preyed upon by a wide variety of mammals (cougars, coyotes, foxes, wolves, jaguars, fishers), birds of prey (great horned owls, hawks, eagles), and reptiles (crocodiles, snakes). For humans, they are trapped or hunted for their fur, food, or for sporting purposes, and some are raised as pets. 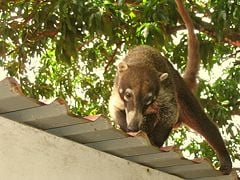 Members of Carnivora are placed into two main sub-orders, Feliformia (cat-like) and Caniformia (dog-like). Procyonidae is placed in the Caniformia sub-group along with the families Canidae (dogs, wolves, and foxes), Ursidae (bears), Mustelidae (weasels, badgers, and otters), and Mephitidae (skunks), as well as the pinnipeds (seals, sea lions, and walruses).

The actual number of extant species in Procyonidae depends on the taxonomic scheme, since some taxa are considered species in some schemes but sub-species in other schemes. For example, some classifications recognize five species of olingos (genus Bassaricyon), while others recognize these are subspecies of the same species (Larivière 2004). Likewise, the number of species of raccoons (genus Procyon) is unsettled, as some island species, such as the Bahaman raccoon (P. maynardi) and Guadeloupe raccoon (P. minor) are considered variants of the northern raccoon (P. lotor) (Larivière 2004). And some place the red panda (Ailurus fulgens) in the Procyonidae family, while Wilson and Reeder (1993) place it in Ursidae with the bears and some consider it in a separate family, Ailuridae.

In general, the following are placed in family Procyonidae: Raccoons, coatis, cacomistle, kinkajou, ringtails, and olingos. Roughly, members of these groups comprise about 15 species, placed in six genera.

Procyonids are small to medium sized mammals, with generally slender bodies and medium to large tails. They range in weight from less than 1 kilogram (Bassariscus) to over 20 kilograms (Procyon lotor) (Myers 2000). Some are stocky rather than slender, such as the common or North American raccoon (Procyon lotor). Except for the kinkajou, all procyonids have banded tails; kinkajous have unbanded tails. The kinkajou has a prehensile tail, and the coati tail is very mobile and used for balancing while climbing (Myers 2000).

Procyonids tend to have a rounded head and ears. The snouts may be short, as in Potos, or long as in Nasua and Procyon (Larivière 2004). Most have distinct facial markings, particularly in the raccoons, but facial markings are missing in the kinkajous.

The feet have five digits, with short, recurved claws. Most species have non-retractile claws, but some species have claws that can be partially retracted. Like bears, procyonids are plantigrade, walking on the soles of their feet.

Males tend to be slightly larger than females and have a well-developed, bilobed baculum (penis) (Myers 2000; Larivière 2004).

Because of their omnivorous diet, procyonids have lost some of the adaptations for flesh-eating found in their carnivorous relatives. While they do have carnassial teeth, these are poorly developed in most species, especially the raccoons. Apart from the kinkajou, procyonids have the dental formula:

If the red panda is not included in this family, then all extant members are found in the New World, mostly throughout Central America and the northern half of South America, but with the common raccoon in North America (Larivière 2004). They are found in most habitats, with the exception of possibly the desert. The common raccoon inhabits mixed forest, farmland, and urban areas in the United States and Canada, while most species occur in tropical forests (Larivière 2004).

If the red panda were included in this family, as in some classifications, it is found in Old World temperate forests of the Himalayas from Nepal to various provinces in China (Larivière 2004).

Procyonids are omnivorous, consuming plant and animal matter. The ring-tailed cats are mostly carnivorous, while the kinkajous are mostly frugivores, consuming bananas, pineapple, nectar, grapes, mangos, melons, as well as honey, peas, bird eggs, insects, and occasionally birds. If the red panda were included, it is specialized as a bamboo feeder.

While coatis are diurnal, all other procyonids are nocturnal. Many procyonids, such as Bassariscus (ringtails and cacomistles) are mostly solitary animals, and the mother raises litters of up to four young on her own (Russell 1984). However, Nasua (coatis) are highly gregarious and some others, such as Procyon (raccoons) have various degrees of sociality (Larivière 2004).

All species are to some degree arboreal, being capable climbers. They will climb trees when pursued by predators.

Most species are promiscuous breeders. Males do not provide care for the young (Larivière 2004).

Procyonidae is believed to have arisen in South and Central America, with their morphology and behaviors exhibiting many adaptations to warmer, tropical climates, including naked soles, diet relying a great deal on fruits and berries, long digits, and arboreal behavior (Larivière 2004).

Fossils belonging to the genus Bassariscus, which includes the modern ringtail and cacomistle, have been identified from the Miocene epoch, around twenty million years ago. It has been suggested that early procyonids were an offshoot of the canids that adapted to a more omnivorous diet (Russell 1984).

Recent genetic studies have suggested that the kinkajous were an early offshoot of the ancestral procyonid line and are not closely related to any of the other extant genera; coatis and olingos are closest relatives, while the closest relatives of the raccoons are the ringtails and cacomistles (Koepfli et al. 2007). These data are not yet reflected in the classification scheme, which groups kinkajous and olingos together on the basis of similarities in morphology, which are now considered to be an example of parallel evolution.

There is considerable uncertainty over the correct classification of several members. The red panda was previously classified in this family, but some experts, including Don E. Wilson and DeeAnn M. Reeder, classify it as a member of the bear family (Ursidae) or in its own family the Ailuridae. The status of the various olingos is disputed: they may all be better regarded as subspecies of Bassaricyon gabbii.

Because of their general build, the Procyonidae are often viewed as smaller cousins of the bear family. This is apparent in their German names: A raccoon is called a Waschbär (washing bear, as he "washes" his food before eating), a coati is a Nasenbär (nose-bear), while a Kinkajou is a Honigbär (honey-bear). Dutch follows suit, calling the animals wasbeer, neusbeer, and rolstaartbeer respectively.