Badgers have a fierce reputation when defending themselves from predators, and thus the adult badger has few natural enemies, although they may be taken by large carnivores, such as wolves and lynx. However, the young are taken by a number of carnivores and birds of prey, including foxes, eagles, and wolverines. Badgers consume a wide variety of animal and plant life, including earthworms, insects, small vertebrates, and roots and fruit. They thus contribute to terrestrial systems as part of food chains. For humans, they have been hunted and trapped for the meat and hair.

The badgers comprise eight extant species and five genera. The relationship of these genera is not settled. Historically, between four and seven subfamilies have been recognized in the past (Wund 2005). Some consider badgers to be those mustelids that comprise the subfamily Melinae. However, some of these species have also been moved to other families, and currently badgers are placed into three subfamilies: Melinae (badgers of Europe and Asia), Mellivorinae (the Ratel or honey badger), and Taxideinae (the American badger). The Asiatic stink badgers of the genus Mydaus were formerly included in the Melinae, but recent genetic evidence indicates that these are actually Old World relatives of the skunks (family Mephitidae).

Typical badgers (Meles, Arctonyx, Taxidea, and Mellivora species) are short-legged and heavy-set. The lower jaw is articulated to the upper by means of a transverse condyle firmly locked into a long cavity of the cranium, so that dislocation of the jaw is all but impossible. This enables the badger to maintain its hold with the utmost tenacity, but limits its jaw movement to hinging opening and shutting or sliding from side to side.

The behavior of badgers differs by subfamily, but all shelter underground, living in burrows called setts. Some are solitary, moving from home to home, while others are known to form clans. Clan size is variable from two to 15.

Badgers are fierce animals and will protect themselves and their young at all costs. Badgers are capable of fighting off much larger animals such as wolves, coyotes, and bears. Badgers can run or gallop at up to 25 to 30 kilometers per hour for short periods of time.

American badgers are fossorial carnivores. (Fossorial means adapted to digging and life underground). Unlike many carnivores that stalk their prey in open country, American badgers catch most of their food by digging. They can tunnel after ground dwelling rodents with amazing speed. They have been known to cache food.

The diet of the omnivorous Eurasian badger consists largely of earthworms, insects, and grubs. They also eat small mammals, amphibians, reptiles, and birds as well as cereals, roots, and fruit (Woodchester).

The honey badger consumes honey, porcupines, and even venomous snakes (such as the puff adder). They will climb trees to gain access to honey from bees' nests.

A male badger is a boar, a female a sow, and a young badger is a cub. The collective name for a group of badgers is a clan, colony, or cete.

The derivation of the word badger is uncertain. It possibly comes from the French word blaireau for "corn-hoarder," or from the French word bêcheur for "digger," introduced during William the Conqueror's reign (BBC 2008). The Oxford English Dictionary, however, states that the most likely derivation is from badge and -ard, in reference to the white mark borne like a badge on its forehead (Weiner and Simpson 1989).

An older term for "badger" is brock (Old English brocc), a Celtic loanword (Gaelic broc, Welsh broch, from Proto-Celtic *brokko) meaning gray (Weiner and Simpson 1989). The Proto-Germanic term was *þahsu- (German Dachs), probably from the PIE root *tek'- "to construct," so that the badger would have been named after its digging of setts (tunnels). 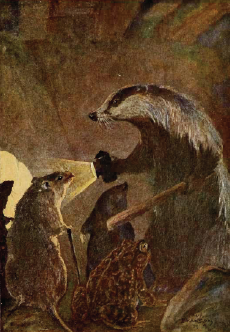 Badger, Rat, Mole, and Toad from The Wind in the Willows.

Hunting badgers is common in many countries. Badger meat is eaten in some countries, including China.

Some protection is offered to badgers in that they are listed in the Bern Convention on the Conservation of European Wildlife and Natural Habitats (Appendix III), but they are not otherwise the subject of any international treaty or legislation.

The blood sport of badger-baiting was outlawed in the United Kingdom by the Cruelty to Animals Act 1835 as well as the Protection of Badgers Act 1992, which makes it a serious offense to kill, injure, or take a badger, or to damage or interfere with a sett unless a license is obtained from a statutory authority. An exemption that allowed fox hunters to loosely block setts to prevent chased foxes escaping into them was brought to an end with the passage of the Hunting Act 2004.

Many badgers in Europe were gassed during the 1960s and 1970s to control rabies. Until the 1980s, gassing was also practiced in the UK to control the spread of bovine TB.

Scandinavian custom is to put eggshells or styrofoam in one's boots when walking through badger territory, as badgers are believed to bite down until they can hear a crunch.

Today, badgers are commercially raised for their hair, which is harvested to make shaving brushes. Because badgers are a protected species in North America and most of Europe, virtually all commercial badger hair comes from mainland China, which supplies knots of hair in three grades to brush makers in both China and Europe. In rural Northern China, badgers multiply to the point of becoming a crop nuisance, and village cooperatives are licensed by the national government to hunt badgers and process their hair (Whittall 2003). The hair is also used for paint brushes, and was used as a trim on Native American garments (Shefferly 1999).