Fox is the general term applied to any of small to medium-sized canids (mammalian family Canidae) placed in the Carnivora tribe vulpini, characterized by a dog-like appearance with a bushy tail, upright ears, pointed snout, and often relatively short legs. There are about 27 extant species of foxes spread over about 9 genera. The term fox also may be limited to those canids in the genus Vulpes, the "true foxes." Although carnivores in the sense of being members of the Carnivora order, foxes typically have an omnivorous diet.

By far the most common species of fox is the red fox (Vulpes vulpes), although different species are found on almost every continent. The presence of fox-like carnivores (order Carnivora) all over the globe has led to their appearance in the popular culture and folklore of many nations, tribes, and other cultural groups.

Like all animals, foxes fulfill a larger purpose while advancing their own individual purpose of survival, maintenance, and reproduction. Ecologically, as apex predators, they play an important role in food chains, keeping populations of prey species under control and thus aiding the balance of nature. For humans, they add to the wonder of nature and, in some cases, assist agricultural production by control of agricultural pests. Historically, there fur has been used for clothing.

Like most other members of the Carnivora order, canids are adapted for a life of hunting and eating other animals. Most also scavenge and many eat plant foods as well. Their senses of hearing and smell are especially acute. Their bodies are lithe and muscular and, in most cases, their legs are long, which gives them speed and endurance to run down prey. The jaws and teeth of canids are large well suited for grasping, biting, and tearing flesh.

Canids are digitigrade, which means that they walk on their toes. Their claws are blunt and help give them traction in running but are not used to fight or to grasp prey, unlike those of most other carnivores—including members of the Felidae, or cat family.

Most canids are covered with thick fur, which protects them in both heat and cold. In most species, the fur is a solid color, without spots or stripes. The fur of the Arctic fox (Alopex lagopus) and the corsac fox (Vulpes corsac) changes color depending on the season. Almost all canids have a long, fur-covered tail.

In general, canids are thought to be among the most intelligent animals. he red fox (Vulpes vulpes) especially has a reputation in folklore of being "clever" and "wily." 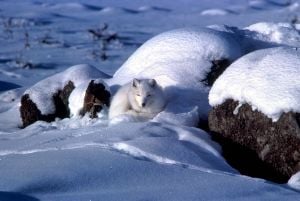 Arctic Fox coiled up in snow

Foxes are generally smaller than other members of the family Canidae, such as wolves, jackals, and domestic dogs. Fox-like features typically include an acute (narrow, pointed) muzzle (a "fox face") and bushy tail. Other physical characteristics vary according to their habitat. For example, the desert fox has large ears and short fur, whereas the arctic fox has small ears and thick, insulating fur. Another example is the red fox, which has a typical auburn pelt ending normally with white marking. Foxes generally have short legs relative to other members of the Canidae family, and upright, pointed ears.

Most foxes live two to three years but can survive for up to ten years, or even longer, in captivity.

Unlike many canids, foxes are usually not pack animals. Typically, they are solitary, opportunistic feeders that hunt live prey (especially rodents). Using a pouncing technique practiced from an early age, they are usually able to kill their prey quickly. Foxes also gather a wide variety of other foods ranging from grasshoppers to fruit and berries. In most foxes, a male and female pair will work together to hunt and to raise their young.

Foxes are normally extremely wary of humans and are typically not kept as pets (with the exception of the fennec). However, the silver fox was successfully domesticated in Russia after a 45 year selective breeding program. This selective breeding also resulted in physical traits appearing that are frequently seen in domestic cats, dogs, and other animals: pigmentation changes, floppy ears, and curly tails (Trut 1999).

Foxes include members of the following genera:

Foxes do not come together in chorus like wolves or coyotes. Fox families, however, keep in contact with a wide array of different sounds. These vocalizations grade into one another and span five octaves; each fox has its own characteristically individual voice. Fox noises can be divided, with a few exceptions, into two different groups: contact sounds and interaction sounds. The former is used by foxes communicating over long distances, the latter in close quarters.

"Wow-wow-wow"
The best-known vulpine noise is a sort of barking that spans three to five syllables. "Conversations" made up of these noises often occur between widely spaced foxes. As their distance decreases, the sound becomes quieter. A cub is greeted with the quietest version of this sound.

The alarm bark
This monosyllabic sound is made by an adult to warn kits of danger. From far away it sounds like a sharp bark, but at closer range it resembles a muffled cough, like a football rattle or a stick along a picket fence.

Gekkering This is a stuttering, throaty noise made at aggressive encounters. It is most frequently heard in the courting season, or when kits are at play.

The vixen's wail
This is a long, drawn-out, monosyllabic, and rather eerie wail most commonly made during the breeding season; it is widely thought that it is made by a vixen in heat summoning dog-foxes. Contrary to common belief, however, it is also made by the males, evidently serving some other purpose as well. This noise fits into neither the contact nor the interaction group. 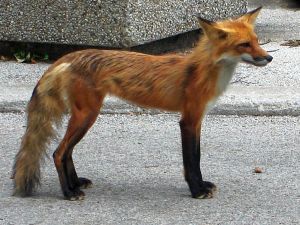 Foxes are readily found in cities and cultivated areas and (depending upon species) seem to adapt reasonably well to human presence.

Red foxes have been introduced into Australia and some other countries for hunting. As such, they have at times become invasive species. Australia lacks carnivores similar to the red fox, and introduced foxes prey on native wildlife, some to the point of extinction. A similar introduction occurred in the 1600-1700s in America, where European reds (Vulpes vulpes) were brought to the colonies for fox hunting, where they decimated the American red fox (Vulpes veloxi) population through more aggressive hunting and breeding. Interbreeding with American reds, European red's traits eventually pervaded the gene pool, leaving European and American foxes now virtually identical. 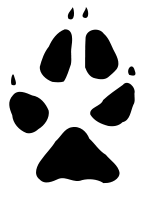 Other fox species do not adapt as well as the European red fox, and are endangered in their native environments. Key among these are the crab-eating fox and the African bat-eared fox. Other foxes, such as fennecs, are not endangered, but will be if humans encroach further into their habitat.

Foxes can be helpful for agricultural purposes. They have been successfully employed to control pests on fruit farms, where they leave the fruit intact (McCandless 1997).

Historians believe foxes have been imported into non-native environments long before the colonial era. The first example of the introduction of the fox into a new habitat by humans seems to be Neolithic Cyprus. Stone carvings representing foxes have been found in the early settlement of Göbekli Tepe in eastern Turkey.