In botany, a fruit is the ripened ovary—together with seeds—of a flowering plant. In angiosperms (flowering plants), an ovary is a part of the female reproductive organ of the flower. Specifically, it is the part of the carpel that holds the ovule(s); after pollination, the ovary will grow into the fruit, while the ovule(s) become the seed(s). In many species, the fruit incorporates the ripened ovary and surrounding tissues. Fruits are the means by which flowering plants disseminate seeds.

No one terminology really fits the enormous variety that is found among plant fruits. Botanical terminology for fruits is inexact and likely will remain so. In cuisine, when discussing fruit as food, the term usually refers to just those plant fruits that are sweet and fleshy, examples of which include plums, apples, and oranges. However, a great many common vegetables, as well as nuts and grains, are the fruit of the plant species they come from.

The term false fruit (pseudocarp, accessory fruit) is sometimes applied to a fruit like the fig (a multiple-accessory fruit; see below) or to a plant structure that resembles a fruit, but is not derived from a flower or flowers. Some gymnosperms (the other major division of seed plants, other than angiosperms), such as yew, have fleshy arils that resemble fruits and some junipers have berry-like, fleshy cones. The term "fruit" has also been inaccurately applied to the seed-containing female cones of many conifers.

The symbiotic relationship between flowering plants with birds and insects as pollinators extends to their fruits. Many animals and birds consume fruits for their nutritive value and at the same time act as dispersal agents for the seeds. The same applies to human beings, for whom both flowers and fruit are a source of pleasure and at the same time an inducement to cultivate the plants from which they came. Beyond satisfying the physical needs of the human body with their excellent nutritional value, many fruits also touch on the inner aspects of the human spirit, fostering joy and happiness through their rich tastes and beautiful colors. Human creativity is revealed in the cultivation of wild species to develop new varieties of fruit with diverse tastes, textures, and colors.

Pollination is a vital part of fruit culture, and the lack of knowledge of pollinators and pollenizers can contribute to poor crops or poor quality crops. In a few species, the fruit may develop in the absence of pollination/fertilization, a process known as parthenocarpy. Such fruits are seedless. A plant that does not produce fruit is known as acarpous, meaning essentially "without fruit." 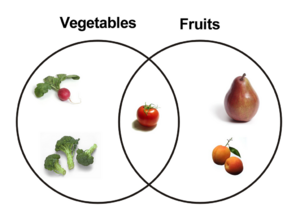 Venn diagram representing the relationship between (botanical) fruits and vegetables. Botanical fruits that are not vegetables are culinary fruits.

Many foods are botanically fruits, but are treated as vegetables in cooking. These include cucurbits (e.g., squash and pumpkin), tomato, cucumber, aubergine (eggplant), and sweet pepper, along with nuts, and some spices, such as allspice, nutmeg, and chiles.

Culinary "fruits" are not always fruits in the botanical sense. For example, rhubarb may be considered a "fruit," though only the astringent stalk or petiole is edible. In the commercial world, European Union rules define carrot—botanically a root—as a fruit for the purposes of measuring the proportion of "fruit" contained in carrot jam.

After an ovule is fertilized in a process known as pollination, the ovary begins to expand. The petals of the flower fall off and the ovule develops into a seed. The ovary eventually comes to form, along with other parts of the flower in many cases, a structure surrounding the seed or seeds that is the fruit. Fruit development continues until the seeds have matured. With some multiseeded fruits the extent of development of the flesh of the fruit is proportional to the number of fertilized ovules.

The wall of the fruit, developed from the ovary wall of the flower, is called the pericarp. The pericarp is often differentiated into two or three distinct layers called the exocarp (outer layer—also called epicarp), mesocarp (middle layer), and endocarp (inner layer).

In some fruits, especially simple fruits derived from an inferior ovary (one that lies below the attachment of other floral parts), other parts of the flower (such as the floral tube, including the petals, sepals, and stamens), fuse with the ovary and ripen with it. The plant hormone ethylene causes ripening. When such other floral parts are a significant part of the fruit, it is called an accessory fruit. Since other parts of the flower may contribute to the structure of the fruit, it is important to study flower structure to understand how a particular fruit forms.

Fruits are so varied in form and development that it is difficult to devise a classification scheme that includes all known fruits. It will also be seen that many common terms for seeds and fruit are incorrectly applied, a fact that complicates understanding of the terminology. Seeds are ripened ovules; fruits are the ripened ovularies or carpels that contain the seeds. To these two basic definitions the clarification that in botanical terminology, a nut is a type of fruit and not another term for seed, can be added.

There are three basic types of fruits:

Simple fruits can be either dry or fleshy and result from the ripening of a simple or compound ovary with only one pistil.

Fruits in which part or all of the pericarp (fruit wall) is fleshy at maturity are simple fleshy fruits. Types of fleshy, simple fruits (with examples) are:

An aggregate fruit, or etaerio, develops from a flower with numerous simple pistils. An example is the raspberry, whose simple fruits are termed drupelets because each is like a small drupe attached to the receptacle. In some bramble fruits (such as blackberry), the receptacle is elongate and part of the ripe fruit, making the blackberry an aggregate-accessory fruit. The strawberry is also an aggregate-accessory fruit, only one in which the seeds are contained in achenes. In all these examples, the fruit develops from a single flower with numerous pistils.

A multiple fruit is one formed from a cluster of flowers (called an inflorescence). Each flower produces a fruit, but these mature into a single mass. Examples are the pineapple, edible fig, mulberry, osage-orange, and breadfruit.

In some plants, such as this noni, flowers are produced regularly along the stem and it is possible to see together examples of flowering, fruit development, and fruit ripening.

Stages of flowering and fruit development in the noni or Indian mulberry (Morinda citrifolia) can be observed on a single branch. First, an inflorescence of white flowers called a head is produced. After fertilization, each flower develops into a drupe, and as the drupes expand, they connate (merge) into a multiple fleshy fruit called a syncarpet.

Seedlessness is an important feature of some fruits of commerce. Commercial cultivars (named, cultivated plant variety) of bananas and pineapples are seedless. Some cultivars of citrus fruits (especially navel oranges and mandarin oranges), table grapes, grapefruit, and watermelons are valued for their seedlessness.

In some species, seedlessness is the result of parthenocarpy, where fruits set without fertilization. Parthenocarpic fruit set may or may not require pollination. Most seedless citrus fruits require a pollination stimulus; bananas and pineapples do not. Seedlessness in table grapes results from the abortion of the embryonic plant that is produced by fertilization, a phenomenon known as stenospermocarpy, which requires normal pollination and fertilization.

Variations in fruit structures largely relate to the mode of dispersal of the seeds they contain.

Some fruits have coats covered with spikes or hooked burrs, either to prevent themselves from being eaten by animals or to stick to the hairs of animals, using them as dispersal agents. Other fruits are elongated and flattened out naturally and so become thin, like wings or helicopter blades. This is an evolutionary mechanism to increase dispersal distance away from the parent.

The sweet flesh of many fruits is "deliberately" appealing to animals, so that the seeds held within are "unwittingly" carried away and deposited at a distance from the parent. Likewise, the nutritious, oily kernels of nuts are appealing to rodents (such as squirrels) who hoard them in the soil in order to avoid starving during the winter, thus giving those seeds that remain uneaten the chance to germinate and grow into a new plant away from their parent.

Many fruits, including fleshy fruits like apples and mangos, and nuts like walnut, are commercially valuable as human food, eaten both fresh and made into jams, marmalade, and other preserves for future consumption. Fruits are also found commonly in such manufactured foods as cookies, muffins, yogurt, ice cream, cakes, and many more.

Fresh and dry fruits are a staple food of humans, and are excellent sources of minerals, vitamins, and enzymes. Fruits, along with vegetables (many of which are actually fruits), are highly recommended as central to good nutrition. Berries, for example, are rich in iron, phosphorus, and sodium, and apples and mango have good quantities of vitamins A and B, as well as phosphorus and glutamic acid.

Many fruits, like the flowers from which they originate, also offer aesthetic pleasure, through the rich taste or beautiful colors. They sometimes are the focal point of contemporary paintings and in ancient times were often used in decorating temples, sacred vessels, or ceremonial garments (Bakhru 2000). They have been referenced in ancient literature: the Vedas state that the fruits form the base of the Food of the Gods, and in the Qur’an, fruits like dates, grapes, figs, olives, and pomegranates are considered the gifts of God (Bakhru 2000).