Vitamins are organic (carbon-containing) nutrients obtained through the diet and essential in small amounts for normal metabolic reactions.

Vitamins can act both as catalysts and participants in the chemical reaction. A catalyst is a substance that increases the rate of a reaction—by decreasing the activation energy required—without itself being permanently changed at the end of the chemical reaction. The body typically assembles vitamin-dependent catalysts from a variety of building blocks, including amino acids, sugars, phosphates, and vitamins. Each vitamin is typically used in multiple different catalysts and therefore has multiple functions (Kutsky 1973).

Vitamins show the importance of balance in human life. One can consume animals and drink water to address one's hunger and quench one's thirst. But without balance in one's diet, one will suffer from disease. For example, one needs to consume plants, such as fruits and vegetables, to obtain sufficient amounts of essential vitamin C, as sailors discovered when they failed to take fresh foods on their voyages.

Until the 1900s, vitamins could only be obtained by eating food. However, they are now commercially available. There are a few vitamins that we obtain by other means than directly from the diet: for example, microorganisms in the intestine—commonly known as gut flora—produce vitamin K and biotin, while one form of vitamin D is synthesized in the skin with the help of natural ultraviolet sunlight. Some vitamins can also be obtained from precursors that can be obtained in the diet. Examples include vitamin A, which can be produced from beta carotene and niacin from the amino acid tryptophan.

The term vitamin does not encompass other essential nutrients, such as dietary minerals, essential fatty acids, or essential amino acids, nor is it used for the large number of other nutrients that merely promote health, but are not strictly essential. 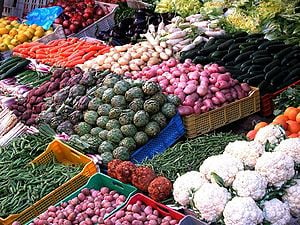 Vegetables are a great source of vitamins

Vitamins are classified as fat-soluble or water-soluble based on how they are absorbed by the body. In humans, there are thirteen vitamins, divided into two groups, four fat-soluble and nine water-soluble. Vitamins A, D, E, and K are fat soluble, while the water-soluble vitamins include vitamin C and the B-complex vitamins (thiamine (B1), riboflavin (B2), niacin (B3), pantothenic acid (B5), vitamin B6, vitamin B12, biotin, and folate.

The value of eating certain foods to maintain health was recognized long before vitamins were identified. The ancient Egyptians knew that feeding a patient liver would help cure night blindness, now known to be caused by a vitamin A deficiency. In 1747 the Scottish surgeon James Lind discovered that citrus foods helped prevent scurvy, a particularly deadly disease in which collagen is not properly formed, and characterized by poor wound healing, bleeding of the gums, and severe pain. In 1753 Lind published his Treatise on the Scurvy. His recommendation of using lemons and limes to avoid scurvy was adopted by the British Royal Navy, resulting in the nickname “Limey” for sailors of that organization. His discovery, however, was not widely accepted by individuals; In the Royal Navy's Arctic expeditions in the nineteenth century, for example, it was widely believed that scurvy was prevented by good hygiene on board ship, regular exercise, and maintaining the morale of the crew, rather than by a diet of fresh food, so Navy expeditions took all the amenities of 'sophisticated' society, like silk sheets, spices, expensive food and drink, and almost nothing of any use beyond the Arctic Circle. As a result, these expeditions continued to be plagued by scurvy and other deficiency diseases. At the time Robert Falcon Scott made his two expeditions to the Antarctic in the early twentieth century, the prevailing medical theory was that scurvy was caused by "tainted" canned food.

In 1881, Russian surgeon Nikolai Lunin fed mice on an artificial mixture of all the separate constituents of milk known at that time, namely the proteins, fats, carbohydrates, and salts. They died, while the mice fed by milk itself developed normally. He made a conclusion that "a natural food such as milk must therefore contain besides these known principal ingredients small quantities of unknown substances essential to life."[1] However, his conclusion was rejected by other researchers who were unable to reproduce his results. One difference was that he used table sugar (sucrose), while other researchers used milk sugar (lactose), which still contained small amounts of vitamin B.

When Casimir Funk isolated the water-soluble complex of micronutrients whose bioactivity Fletcher had identified in 1912, he proposed that it be named "Vitamine." Vita in Latin is life and the -amine suffix is for amine; at the time it was thought that all vitamins were amines (containing nitrogen). The name soon became synonymous with Hopkins' "accessory factors," and by the time it was shown that not all vitamins were amines, the word was already ubiquitous. In 1920, Jack Cecil Drummond proposed that the final "e" be dropped, to deemphasize the "amine" reference, after the discovery that vitamin C had no amine component, and the name has been "vitamin" ever since.

The reason the alphabet soup of vitamins seems to skip from E to the rarely-mentioned K is that most of the "letters" were reclassified, as with fatty acids, discarded as false leads, or renamed because of their relationship to "vitamin B," which became a "complex" of vitamins. Vitamin G (Riboflavin), for example, is now known as B2.

Throughout the early 1900s, scientists were able to isolate and identify a number of vitamins by depriving animals of them.

Why we need vitamins

Although vitamins contain no calories, they are essential for normal growth and development. Using the genetic blueprint inherited from its parents, a child's body begins to build itself from the "food" it absorbs beginning at the moment of conception. Once out of the womb, the child continues on with this incredibly complex set of tasks using the building blocks it gets by eating and drinking. There is no other source for the raw materials, tools, and energy needed to build an adult human. We are literally made out of what we have eaten throughout our lives.

As the body builds itself according to its genetic plan, it will need certain vitamins and minerals in place at the right times. These nutrients will allow the chemical reactions to take place that will make skin, bone, muscle, and so forth out of food.

If those nutrients are missing, the body must manage as best it can to follow its blueprint. If there is serious deficiency, a child develops a deficiency disease and the genetic plan is completed so poorly that the results are obvious—malformed limbs in the case of rickets, or the mental retardation of iodine deficiency.

Once growth and development is completed, adults remain dependent upon vitamins to maintain good health. Vitamins are neither a source of energy nor a source of structural tissue components. They give living cells the ability to conduct and control chemical reactions. Vitamins enable the body to use the calories provided by the food that we eat and to help process proteins, carbohydrates, and fats. Vitamins are necessary to maintain proper functioning of the nervous system. Vitamins are also involved in building cells, tissues, and organs—vitamin C, for example, helps produce healthy skin.

Vitamins are available by eating a balanced diet including fruits, vegetables, grains, nuts, meat, eggs, fish, and milk. Research has shown that foods rich in antioxidants are particularly beneficial for health. Antioxidants neutralize free radicals. A buildup of free radicals can damage body cells and tissues, resulting in disease. Studies have shown that diets rich in vegetables and fruits result in a lower incidence of some diseases, including certain cancers.

Deficiencies of vitamins are either primary or secondary. A primary deficiency occurs if a person does not get enough of the vitamin in the food he eats. A secondary deficiency may be due to a lifestyle factor, such as smoking, excessive alcohol consumption, or the use of certain medications that interfere with the absorption or the body's use of the vitamin. Prolonged use of antibiotics will kill off the useful gut flora that make vitamin K. Vitamin deficiencies may also be due to an underlying problem, such as an intestinal disorder, that prevents or limits the absorption or use of the vitamin.

According to the World Health Organization, vitamin A deficiency is the most serious vitamin deficiency disease in the world today. It is the leading cause of preventable childhood blindness in developing countries. It also increases the risk of death from measles, malaria, worms, and other diseases. It can be prevented by diet improvements and supplementation for children and mothers.[2]

Well-known vitamin deficiencies are thiamine (beriberi), niacin (pellagra), vitamin C (scurvy) and vitamin D (rickets). In North America today, however, such deficiencies are rare due to an adequate food supply for most people, and food fortification programs that add vitamins and minerals to common foods.

Scientists now have shifted their focus to discovering ways in which vitamins can promote health, prevent disease, boost the body's protection against infection, and even slow down the aging process. At the same time, public interest in vitamins has heightened. This has been prompted by headlines in the media and widespread advertising by the manufacturers of nutrient supplements.

Each food source contains different ratios of vitamins. Therefore if the only source of vitamins is food, a change in diet from season-to-season, year-to-year, or day-to-day changes the doses of vitamins. Ordinary people do not sense any change in health as a consequence. This leads to the conclusion that the nervous system maintains a feeling of normalcy across a wide range of vitamin dosages.

Vitamins have only been produced as commodity chemicals and made widely available as inexpensive pills for a few decades (Kirk-Othmer 1984). For the first time in human history, parents are empowered to independently control the doses of vitamins eaten by themselves and their children. Because the catalytic action of vitamins is ordinarily imperceptible except at the extremes of deficiency and overdose, the vast majority continues to depend upon food as the sole source of vitamins.

The likelihood of consuming too much of any vitamin from food is remote, but overdosing from vitamin supplementation can occur. For example, many people take large amounts of vitamin C, usually in the belief that this will relieve or "cure" a cold. However, overdosing on vitamin C can lead to diarrhea or kidney stones. If you take vitamin supplements, you should always do so at the advice of your doctor or dietitian, and first consider whether your diet could be improved instead.