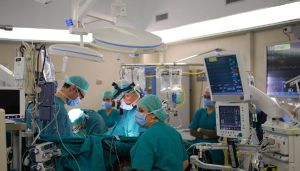 Surgery (from Greek: cheirourgia, meaning "hand work") is the medical specialty that treats diseases, injuries, or other physical conditions by operative manual and instrumental treatment. Surgeons may be physicians, dentists, or veterinarians who specialize in surgery.

A surgery can also refer to the place where surgery is performed, or simply the office of a physician, dentist, or veterinarian.

For many physical ailments, surgery offers an effective and efficient treatment, and sometimes is the only viable alternative. For other ills of the physical body, a more comprehensive approach to medicine may be recommended, including complementary and alternative medicine. Some non-essential surgical techniques, such as clitoridectomy, circumcision, and some cosmetic surgeries, are based on cultural, religious, or personal choice issues rather than medical reasons (see list of surgical procedures).

Did you know?
The term "surgery" comes from the Greek "cheirourgia," meaning "hand work"

The earliest known surgical procedure is trepanation, which is also known as trephinning or trepanning. In this procedure, a hole was drilled or scraped into the skull, leaving the membrane around the brain intact. A trepanned cranium found near Kiev, Ukraine is the oldest yet found, dating back to 7300-6220 B.C.E. Trepanation attempted to address health problems that related to abnormal intracranial pressure, headaches, and mental illnesses. It has been found in cultures around the world. Modern surgery has largely abandoned this practice, although it is still used in cases of acute subdural hematomas and acute epidural hematomas, with hematoma being a collection of blood.

Researchers have also uncovered an ancient Egyptian human mandible dated to approximately 2800 B.C.E. The mandible, having two perforations just below the root of the first molar, indicates the draining of an abscessed tooth. Recent excavations of the construction workers of the Egyptian pyramids also led to the discovery of evidence of brain surgery on a laborer, who continued living for two years afterward.

As it is now known, the Edwin Smith Surgical Papyrus is a collection of valuable Egyptian history. It is an ancient Egyptian textbook on surgery and describes in exquisite detail the examination, diagnosis, treatment, and prognosis of numerous ailments.

In India, the Sushruta Samhita is considered one of the greatest ancient texts. It discusses traditional Indian medicine and surgery. Sushtra, thought to be the book's author, lived over three thousand years ago. As an Indian physician, he is an important figure in the history of surgery. He lived, taught, and practiced his art of surgery on the banks of the Ganges in the area that corresponds to the present day city of Benares in North-West India. Because of his seminal and numerous contributions to the science and art of surgery, he is also known by the title "Father of Surgery." In the 184 chapters of the book, approximately 1,120 conditions are listed. Several treatments are discussed, including the use of leeches in order to prevent blood clots. After being rediscovered, this technique is now being used by plastic surgeons to help reduce blood congestion in tissue.

By the thirteenth century, many European towns were demanding that physicians have several years of study or training before they could practice. Surgery had a lower status than pure medicine, beginning as a craft tradition until Rogerius Salernitanus composed his Chirurgia, which laid the foundation for the species of the occidental surgical manuals, influencing them up to modern times.

Among the first modern surgeons were battlefield doctors in the Napoleonic Wars who were primarily concerned with amputations. Naval surgeons were often barber-surgeons, who combined surgery with their main jobs as barbers.

As surgery has changed and developed over centuries, so has the status and job of physicians and surgeons. Today, surgeons are considered to be specialized physicians. The profession of being a surgeon and that of being a physician have different historical roots, and surgeons have now even subspecialized along with physicians. For example, the Hippocratic Oath warns physicians against the practice of surgery, specifically that "cutting persons laboring under the stone," in other words, lithotomy, an operation to relieve kidney stones, was to be left to "such persons as practice [it]."

North American physicians and surgeons are always addressed as "Doctor." By contrast, in the United Kingdom, surgeons are distinguished from physicians by being referred to as "Mister." This tradition has its origins in the eighteenth century, when surgeons were barber-surgeons and did not have a degree (or indeed any formal qualification), unlike physicians, who were doctors with a university medical degree. By the beginning of the nineteenth century, surgeons had obtained high status, and in 1800, the Royal College of Surgeons (RCS) in London began to offer surgeons a formal status via RCS membership. The title Mister became a badge of honor, and today only surgeons who hold the Membership or Fellowship of one of the Royal Surgical Colleges are entitled to call themselves Mister, Miss, Mrs., or Ms.

Before the advent of anaesthesia, surgery was a traumatically painful procedure and surgeons were encouraged to be as swift as possible to minimize patient suffering. This also meant that operations were largely restricted to amputations and external growth removals. In addition, the need for strict hygiene during procedures was little understood, which often resulted in life threatening post-operative infections in patients.

Beginning in the 1840s, surgery began to change dramatically in character with the discovery of effective and practical anaesthetic chemicals such as ether and chloroform. In addition to relieving patient suffering, anaesthesia allowed more intricate operations in the internal regions of the human body. Also, the discovery of muscle relaxants such as curare allowed for safer applications.

However, the move to longer operations increased the danger of life-threatening complications since the prolonged exposure of surgical wounds to the open air heightened the chance of infections. It was only in the late nineteenth century with the rise of microbiology, due to scientists like Louis Pasteur, and innovative doctors who applied their findings, like Joseph Lister, did the idea of strict cleanliness and sterile settings during surgery arise.

Diseases that can be treated by surgery

Several diseases can be treated by surgery. A handful of such diseases are listed and/or discussed below. 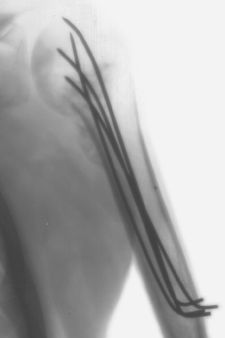 Intraoperative X-ray of a Humerus fixated by Kirschner wires