As commonly defined, the human body is the physical manifestation of a human being, a collection of chemical elements, mobile electrons, and electromagnetic fields present in extracellular materials and cellular components organized hierarchically into cells, tissues, organs,and organ systems. The human body as an integrated whole is a highly dynamic system maintaining its form and function even as individual cells are routinely dismantled and replaced with newly constructed ones.

The human body is an intricate organism, with cells, tissues, organs, and systems working together in remarkable harmony. In Eastern medicine, the meaning of the term human body is extended to include networks of immaterial mental or energetic pathways. This leads towards a holistic understanding of the "mind-body" relationship.

The most common chemical compound in the human body is water, with cells having between 65 percent and 90 percent by weight. Four other common compounds are carbohydrates (such as glucose or starch), lipids (fats), nucleic acids, and proteins. These last four all include the element carbon.

The average adult human body is estimated to have ten trillion to one hundred trillion cells. These range in size from a sperm cell, which is the smallest, to the egg cell, which is the largest. The sperm head is about 2.5 to 3.5 microns wide and 5 to 7 microns long, with a tail about 50 to 80 microns long. The egg cell is about 60 microns in diameter. Although muscle cells may be considered larger, they are multinuclear and represent the fusion of many individual cells. Nerve cells are large because of the axons, but the actual cell body is smaller than the egg.

There are a wide variety of types of cells, and they differ in size, shape, and function. Among the types of cells are bone cells, blood cells, nerve cells, muscle cells, stomach cells, and so forth. Red blood cells carry oxygen, bone cells form the skeleton of the body, nerve cells carry electrical signals, and muscle cells move the bones. Stomach cells secrete acids to digest food, while cells in the intestines absorb nutrients.

Tissues are collections of similar cells that perform a specialized function. The human body has four primary tissue types: 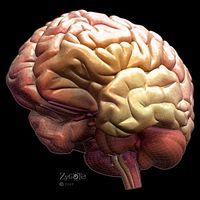 An organ is a group of two or more different kinds of tissues that work together to perform a specific function or group of functions. Examples of organs include the heart, lungs, brain, eye, stomach, spleen, pancreas, kidneys, liver, intestines, uterus, bladder, and so forth.

The largest organ in the human body is the skin. Covering the entire body, even the eyes, which have a transparent layer of skin called the conjunctiva, the skin offers protection from water, air, sunlight, injury, dirt, chemicals, and microorganisms. The skin also helps to regulate temperature; contains nerves for sensation to touch and temperature; and holds fluids inside the body. Made up by three layers of tissue—the top epidermis, the inner dermis, and the deepest layer of subcutaneous fatty tissue—the skin of an average adult covers an area of about 22 square feet, and varies in thickness depending on the part of the body covered. Fingernails and toenails are composed of dead cells from the epidermis, and hair is also modified epidermis.

The largest organ inside the human body is the liver. The liver in an adult typically weighs between 1.0 and 2.5 kilograms (2.2 to 5.5 pounds). The liver plays a major role in metabolism and has a number of functions in the body including drug detoxification, glycogen storage, and plasma protein synthesis. It also produces bile, which is important for digestion.

Major systems of the human body

A group of organs functioning as a unit is called a system, or organ system. For example, the stomach, small intestine, liver, and pancreas are part of the digestive system, and the kidneys, bladder, and connecting tubes constitute the urinary system.

The following are the major systems of the human body. 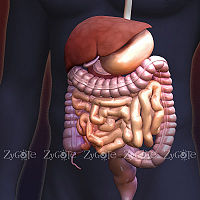 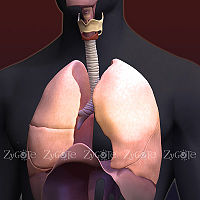 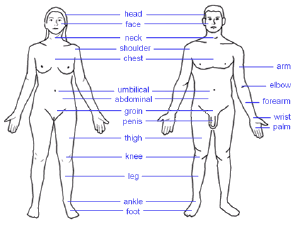 Common names of well known parts of the human body, from top to bottom:

The human body in religious and philosophical context

In philosophical and spiritual terms, the term human body is often used in context of "mind-body unity" or "mind-body disunity," in order to convey a separation between physical desires and spiritual aspirations, or as reflected in philosophy, the "mind-body problem."

The integration of the mental and physical aspects of the body has been developed systematically in Eastern medicine, both in China and India. In these medical traditions, the body contains immaterial, energetic pathways that provide linkage between a person's physical function and his or her mental or spiritual state.

The Body in Chinese medicine 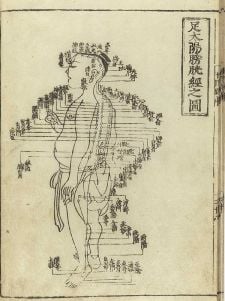 Chinese medicine is based on a model of the human body as a single whole that involves several "systems of function" loosely associated with (but not identified on a one-to-one basis with) physical organs. Some systems of function, such as the "triple heater" (San Jiao, also called the "triple burner") have no corresponding physical organ, but rather, represent the various jiaos or levels of the body (upper, middle, and lower).

Disease is understood as a loss of balance homeostasis between the yin and yang energies among the several systems of function, and treatment of disease is attempted by modifying the activity of one or more systems of function through the activity of needles, pressure, heat, etc., on small sensitive regions on the body surface, traditionally called "acupuncture points" in English, or xue (穴, cavities) in Chinese. This is referred to as treating "patterns of disharmony."

The Chinese model of the human body identifies 12 primary and eight "extra" energy meridians running vertically, bilaterally, and symmetrically as channels corresponding to and connecting internally with one of the 12 Zang Fu ("organs"). The meridians are in balance with six yin and six yang channels.

Ten of the main meridians are named after organs of the body (heart, liver, etc.), and the other two are named after so-called body functions (Heart Protector or Pericardium, and San Jiao). The meridians are capitalized to avoid confusion with a physical organ (for example, "Heart meridian" as opposed to the "heart meridian"). The two most important of the eight "extra" meridians are situated on the midline of the anterior and posterior aspects of the trunk and head.

In the Chinese model, health is achieved and maintained through the free flow of qi (a difficult-to-translate concept that pervades Chinese philosophy and is commonly translated as "vital energy") throughout the body. Pain or illnesses are treated by attempting to remedy local or systemic accumulations or deficiencies of qi. Pain is considered to indicate blockage or stagnation of the flow of qi, and an axiom of the medical literature of acupuncture is "no pain, no blockage; no blockage, no pain."

Energy vortices in the human body 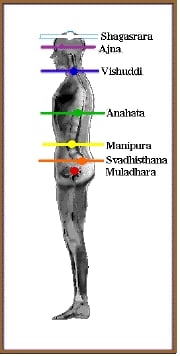 One view of the chakras.

The chakras are identified in ancient Indian philosophies, and many others as well, as systemic vortices of energy aligned in an ascending column from the base of the spine to the top of the head. In New Age practices, each chakra is often associated with a certain color. In various traditions, chakras are associated with multiple physiological functions, aspects of consciousness, and other distinguishing characteristics. They are often visualized as lotuses with a different number of petals in every chakra.

The chakras are thought to vitalize the physical body and to be associated with interactions of a physical, emotional. and mental nature. They are considered loci of life energy or prana, also called shakti, qi (Chinese; ki in Japanese), coach-ha-guf (Hebrew), bios (Greek) and aether (English), which is thought to flow among them along pathways called nadis. The function of the chakras is to spin and draw in this energy to keep the spiritual, mental, emotional, and physical health of the body in balance.

The growth of the New Age movement has sparked an increased interest in the West regarding chakras. Many in this movement point to a correspondence between the position and role of the chakras and those of the glands in the endocrine system. These ideas first appear in the writings of theosophical authors like C. W. Leadbeater, who wrote a book on the chakras.

The seven principal chakras are said by some to reflect how the unified consciousness of humanity (the immortal human being or the soul), is divided to manage different aspects of earthly life (body/instinct/vital energy/deeper emotions/communication/having an overview of life/contact to God). The chakras are placed at differing levels of spiritual subtlety, with Sahasrara at the top being concerned with pure consciousness, and Muladhara at the bottom being concerned with matter, which is seen simply as crucified consciousness.

So much more than a machine

The human body's cells, tissues, organs, and systems work together in remarkable harmony. Actions as simple as eating a piece of fruit involve numerous systems in complex coordination, whether the nervous system, with impulses traveling up to 248 mph, or the muscular system, with contracting and relaxation of some of the body's 600 muscles, or the endocrine system, involving hormones produced by glands in one part of the body that affect select cells with the correct receptors in other parts of the body. Should one organ or system of the body falter in performing its function, the entire body is affected.

The complexity of the human body can be seen from the level of cells to that of systems. There are over 250 different kinds of cells in the human being (Baldi 2001) and Fukuyama (2002) states there are approximately 100 trillion cells in the average adult (although other sources list estimates of ten trillion or fifty trillion cells). These cells are generally performing 20 diverse reactions at any one time, involving repair, reproduction, communication, waste disposal, and nutrition, and including a purpose that aids the body as a whole. The human genome is so complex that if translated into English it would fill a 300-volume set of encyclopedias, each with about 2,000 pages (Baldi 2001). The human eye can distinguish up to one million color surfaces and human hearing is so sensitive it can distinguish hundreds of thousands of different sounds. The liver alone performs 500 different functions, and a square inch of skin contains on the average 650 sweat glands, 20 blood vessels, and more than a thousand nerve endings. The brain has been called "the most developed and complex system known to science" (Davis 1992).

For religious adherents, the complexity of the human body, and the remarkably harmonious coordination of its parts, supports their view that the human body is the product of design by a supreme being.