Myosins are a large family of motor proteins found in eukaryotic tissues and that are essential agents for movement in living organisms. They are responsible for actin-based motility in cells. In plants and fungi, myosin is involved in cytoplasmic streaming, which facilitates movement by allowing cytoplasm to stream in a particular direction. A major contractile protein in muscle cells, myosin serves as a "molecular motor" for the conversion of chemical energy into cellular contraction (White et al. 1998).

Without actin, myosin is just another chain of amino acids in muscles. But actin and myosin working together allow muscle contraction, demonstrating a unity and harmony of creation at the level of proteins. The diversity of forms of myosin proteins allows both slow and fast muscle contraction.

The thick filaments of myofibrils, which are bundles of proteins responsible for muscle contraction, are made up of myosin. Muscle fibers each contain hundreds to thousands of these myofibril stands, with each strand consisting of the alternating filaments of actin and myosin. Different isoforms, or types, of the myosin protein (specifically isoforms of the heavy chains) are present in different kinds of muscle. These various types of myosin are related to the speed of contraction of the muscle. Thus, one can have muscles that are "fast twitch" or "slow twitch."

The heavy chains contain the site for ATP hydrolysis and the binding with actin (White et al. 1998). Most myosin molecules are composed of both a head and a tail domain. The head domain binds the filamentous actin (another protein) and uses adenosine triphosphate, or ATP, hydrolysis to generate force and walk along the actin filament towards the plus (+) end of the filament (with the exception of one family member, myosin VI, which moves towards the minus end). (This is explained further below for myosin II.) ATP serves as the major source of energy in the human body. The tail domain generally mediates interaction with cargo molecules and/or other myosin protein subunits.

An isoform of myosin, specifically myosin II, is responsible for skeletal muscle contraction and is perhaps the best-studied example of these properties. Myosin II contains two heavy chains, each about two thousand amino acids in length, which constitute the head and tail domains. Each of these heavy chains contains the N-terminal head domain, while the C-terminal tails take on a coiled-coil morphology, holding the two heavy chains together (imagine two snakes wrapped around each other, such as in a caduceus). Thus, myosin II has two heads. It also contains four light chains (two per head), which bind the heavy chains in the "neck" region between the head and tail.

In muscle cells, it is myosin II that is responsible for producing the contractile force. Here, the long coiled-coil tails of the individual myosin molecules join together, forming the thick filaments of the sarcomere (basic unit of a muscle's fiber). The force-producing head domains stick out from the side of the thick filament, ready to walk along the adjacent, actin-based, thin filaments in response to the proper chemical signals. 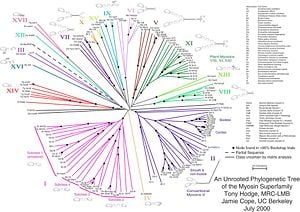 The polarity of an actin filament can be determined by decorating the microfilament with myosin "S1" fragments, creating a barbed plus (+) and pointed minus (-) end on the filament. An S1 fragment is composed of the head and neck domains of the myosin II.

Myosin II, the most conspicuous of the myosin superfamily due to its abundance in muscle fibers, was the first to be discovered. However, beginning in the 1970s, researchers began to discover new myosin variants with one head as opposed to the two heads and largely divergent tail domains of myosin II. These new superfamily members have been grouped according to their structural similarities, with each subfamily being assigned a Roman numeral. The now diverse array of myosins is considered to have evolved from an ancestral precursor (see picture).

Analysis of the amino acid sequences of different myosins shows great variability among the tail domains, but almost perfect retention of the same head sequence. Presumably this is so the myosins may interact, via their tails, with a large number of different cargoes, while the goal in each case—to move along actin filaments—remains the same and therefore requires the same machinery in the motor. For example, the human genome contains over 40 different myosin genes.

These differences in shape also determine the speed at which myosins can move along actin filaments. The hydrolysis of ATP—the splitting of the ATP molecule into two molecules through the use of water and the subsequent release of the phosphate group—causes the power stroke, in which the "lever arm" or "neck" region of the heavy chain is dragged forward. Since the power stoke always move the lever arm by the same angle, the length of the lever arm determines how fast the cargo will move. A longer lever arm will cause the cargo to traverse a greater distance even though the lever arm undergoes the same angular displacement, just as a person with longer legs can move farther with each individual step. Myosin V, for example, has a much longer neck region than myosin II, and therefore moves 30-40 nanometers with each stroke as opposed to only 5-10.

Various pathologies can arise if disturbances occur in the amount or functioning of myosin proteins. For example, acute quadriplegic critical illnesses can evolve with the loss of myosin (myosin deficient fibers). Such illnesses are progressive in nature and cause weakness.

Other illnesses are specific to certain myosin isoforms. For instance, various types of hearing loss and complications can occur with myosin heavy chain irregularities in myosin 6, 7A, and/or myosin 15 (Neuromuscular Disease Center 2006).

Retrieved from https://www.newworldencyclopedia.org/p/index.php?title=Myosin&oldid=687066
Categories:
This page was last edited on 3 April 2008, at 23:21.
Content is available under Creative Commons Attribution/Share-Alike License; additional terms may apply. See Terms of Use for details.