Adenosine triphosphate (ATP) is the chemical compound known in biochemistry as the "molecular currency" of intracellular energy transfer; that is, ATP is able to store and transport chemical energy within cells. All cells—both prokaryotic, such as bacteria, and eukaryotic, such as with amoeba, fungi, plants, and animals—use ATP as the main molecule for carrying energy, and as the principal energy source for endergonic, or energy-requiring, reactions.

Living cells require energy to survive and function, and most of this energy comes either via radiant energy or from chemical energy tied up in interatomic bonds of nutrient molecules. When nutrient molecules, such as those derived from carbohydrates and fats, are oxidized by cells, a portion of the free energy released can be captured in the chemical bonds of ATP. ATP allows cells to store energy as chemical potential and to circulate and use this energy. Cells are constantly creating and circulating ATP, and when cells need energy, they "spend ATP," leading it to be commonly referred to as the energy currency of life.

In addition to its energy-related function, ATP also plays an important role in the synthesis of nucleic acids and further in signal transduction pathways in which it provides the phosphate for the protein-kinase reactions.

The ubiquitous presence of ATP in the cells of all living organisms provides support for the view that newer creations are built on the foundation of earlier creations, with ATP having appeared very early in the history of cellular life. The universal use of ATP likewise reflects the conservative nature of creation, where the same or similar metabolic processes and chemical compounds repeatedly occur, and it reflects a connectedness from the simplest organisms to humans. The intricate manner in which ATP is integrated in fundamental metabolic pathways also reveals the complex coordination required between the parts of living systems.

The three linked phosphoryl groups, starting with that on AMP, are referred to as the alpha (α), beta (β), and gamma (γ) phosphates. These linked phosphate groups are the "business end" of the molecule, as ATP stores energy in the bonds between the phosphate groups. A molecule of ATP is sometimes written as A~P~P~P, with the "~" representing a bond that contains potential chemical energy.

ATP is extremely rich in chemical energy, in particular between the second and third phosphate groups. As these chemical bonds are broken (as ATP is converted into ADP and an inorganic phosphate) the energy release is -12 kCal / mole in vivo (inside a living cell), and -7.3 kCal / mole in vitro (in laboratory conditions). Such a relatively massive release of energy from a single chemical change with the whole cycle of charging and discharging the molecule integrated perfectly into the regular cellular metabolism is what makes ATP so valuable to all forms of life. The molecules can be charged up at one site and transported to another site for discharge, somewhat like a dry cell battery. 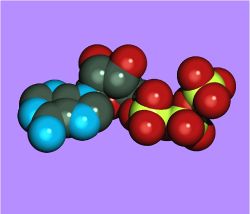 ATP can be produced by various cellular processes. Under aerobic conditions, the synthesis occurs in mitochondria during oxidative phosphorylation, which is catalyzed by ATP synthase; to a lesser degree, under anaerobic conditions, this is done through substrate phosphorylation catalyzed by two enzymes: phosphoglycerate kinase (PGK) and pyruvate kinase.

ATP is also synthesized through several so-called "replenishment" reactions catalyzed by the enzyme families of NDKs (nucleoside diphosphate kinases), which use other nucleoside triphosphates as a high-energy phosphate donor, and the ATP guanido-phosphotransferase family, which uses creatine.

The main fuels for ATP synthesis are glucose and fatty acids. First, glucose is broken down into pyruvate in the cytosol yielding two molecules of ATP for each glucose molecule. Further breakdown of the glucose molecule for synthesizing ATP is carried out in the mitochondria in a process that yields about 30 molecules of ATP for each molecule of glucose that is oxidized. (See citric acid cycle.)

ATP energy is released through hydrolysis (breakdown through reaction with water) of the high-energy phosphate-phosphate bonds. An enzyme, ATPase, aids in the breaking of the bond between the second and third phosphate groups, as ATP is converted to ADP. The hydrolysis yields free inorganic phosphate (Pi) and ADP. Although this may result in free phosphate ions, usually the phosphate group is transferred to another molecule in a process called phosphorylation.

Energy is also released when the bond between the first and second phosphate groups is broken, as ADP is converted to AMP. That is, ADP can be broken down further to another Pi and AMP. ATP can also be broken down to AMP directly, with the formation of pyrophosphate (PPi). This last reaction has the advantage of being an effectively irreversible process in aqueous solution.

This energy can be used by a variety of enzymes, motor proteins, and transport proteins to carry out the work of the cell.

ATP in the human body

The total quantity of ATP in the human body at any one time is about 0.1 mole. Yet, adults convert daily a quantity of ATP corresponding to at least half their body weight, and nearly a ton during a day of hard work. That is, the energy used by human cells requires the hydrolysis of 200 to 300 moles of ATP daily. This means that each ATP molecule is recycled 2,000 to 3,000 times during a single day. There is limited capacity to store ATP in a cell, and it is depleted in seconds, hence its consumption must closely follow its synthesis. That is, cells need to continually replenish or re-synthesize ATP.