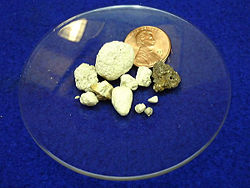 Some samples of phosphate rock, placed alongside a United States one-cent coin (for scale).

Phosphates are the naturally occurring form of the element phosphorus, found in many phosphate minerals. Elemental phosphorus and phosphides are not found (rare phosphide minerals may be found in meteorites). In mineralogy and geology, phosphate refers to a rock or ore containing phosphate ions.

The largest rock phosphate deposits in North America lie in the Bone Valley region of central Florida, United States, the Soda Springs region of Idaho, and the coast of North Carolina. Smaller deposits are located in Montana, Tennessee, Georgia, and South Carolina near Charleston along Ashley Phosphate road. The small island nation of Nauru and its neighbor Banaba Island, which used to have massive phosphate deposits of the best quality, have been mined excessively. Rock phosphate can also be found on Navassa Island. Morocco, Tunisia, Israel, Togo, and Jordan have large phosphate mining industries as well.

However, phosphates are most commonly found in the form of adenosine phosphates, (AMP, ADP and ATP) and in DNA and RNA and can be released by the hydrolysis of ATP or ADP. Similar reactions exist for the other nucleoside diphosphates and triphosphates. Phosphoanhydride bonds in ADP and ATP, or other nucleoside diphosphates and triphosphates, contain high amounts of energy which give them their vital role in all living organisms. They are generally referred to as high energy phosphate, as are the phosphagens in muscle tissue. Compounds such as substituted phosphines, have uses in organic chemistry but do not seem to have any natural counterparts.

In ecological terms, because of its important role in biological systems, phosphate is a highly sought after resource. Consequently, it is often a limiting reagent in environments, and its availability may govern the rate of growth of organisms. Addition of high levels of phosphate to environments and to micro-environments in which it is typically rare can have significant ecological consequences; for example, booms in the populations of some organisms at the expense of others, and the collapse of populations deprived of resources such as oxygen (see eutrophication). In the context of pollution, phosphates are a principal component of total dissolved solids, a major indicator of water quality. 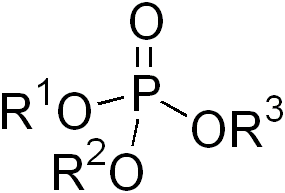 The general chemical structure of a phosphate 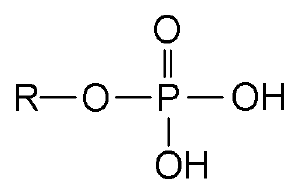 This is the structural formula of the phosphoric acid functional group as found in a weakly acidic aqueous solution. In more basic aqueous solutions, the group will donate the two hydrogen atoms and ionize as a phosphate group with a negative charge of 2. [1]

A phosphate salt forms when a positively charged ion attaches to the negatively charged oxygen atoms of the ion, forming an ionic compound. Many phosphates are insoluble in water at standard temperature and pressure, except for the alkali metal salts.

Phosphate can form many polymeric ions, diphosphate (also pyrophosphate), P2O74−, triphosphate, P3O105−, and so forth. The various metaphosphate ions have an empirical formula of PO3− and are found in many compounds.

Phosphates were once commonly used in laundry detergent in the form trisodium phosphate (TSP), but because of algae boom-bust cycles tied to emission of phosphates into watersheds, phosphate detergent sale or usage is restricted in some areas.

In agriculture phosphate refers to one of the three primary plant nutrients, and it is a component of fertilizers. Rock phosphate is quarried from phosphate beds in sedimentary rocks. In former times, it was simply crushed and used as is, but the crude form is now used only in organic farming. Normally, it is chemically treated to make superphosphate, triple superphosphate, or ammonium phosphates, which have higher concentration of phosphate and are also more soluble, therefore more quickly usable by plants.

Surface runoff of phosphates from excessively fertilized farmland can be a cause of phosphate pollution leading to eutrophication (nutrient enrichment), algal bloom and consequent oxygen deficit. This can lead to anoxia for fish and other aquatic organisms in the same manner as phosphate-based detergents.

the corresponding constants at 25°C (in mol/L) are (see phosphoric acid):

In a strongly basic solution (pH=13):

These ratios show that only PO43− and HPO42− are in significant amounts at high pH.

In a strongly acidic solution (pH=1):

These ratios show that H3PO4 is dominant with respect to H2PO4− in a highly acidic solution. HPO42− and PO43− are practically absent.