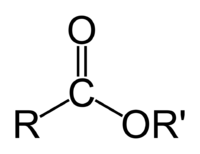 General formula of a carboxylate ester.

In chemistry, esters are organic compounds in which an organic group (symbolized by R' in this article) replaces the hydrogen atom of a hydroxyl group in an oxoacid. A molecule of an oxoacid has an -OH (OH) group from which the hydrogen (H) can dissociate as an H+ ion. Many esters have distinctive odors and flavors, leading to their use as artificial flavorings and fragrances.

The most common esters are the carboxylate esters, where the acid in question is a carboxylic acid. For example, if the acid is acetic acid, the ester is called an acetate. Stable esters such as carbamates, RO(CO)NHR', and dialkyl carbonates, RO(CO)OR, can be formed from unstable carbamic acid or carbonic acid, respectively. Esters may also be formed with inorganic acids; for example, dimethyl sulfate is an ester, and sometimes called "sulfuric acid, dimethyl ester."

Esters are named similarly to salts; although they are not composed of cations and anions as salts are, the terminology used to refer to them follows the same pattern: a more electropositive part followed by a more electronegative part.

An ester can be thought of as a product of a condensation reaction of an acid (usually an organic acid) and an alcohol (or phenol compound), although there are other ways to form esters. Condensation is a type of chemical reaction in which two molecules are joined together and eliminate a small molecule, in this case two-OH groups are joined eliminating a water molecule. A condensation reaction to form an ester is called esterification. Esterification can be catalysed by the presence of H+ ions. Sulfuric acid is often used as a catalyst for this reaction. The name ester is derived from the German Essig-Äther, an old name for acetic acid ethyl ester (ethyl acetate). 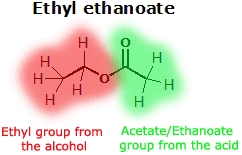 Esters can be produced by an equilibrium reaction between an alcohol and a carboxylic acid. The ester is named according to the alkyl group (the part from the alcohol) and then the alkanoate (the part from the carboxylic acid) which make it up.[1] For example, the reaction between methanol and butyric acid yields the ester methyl butyrate C3H7-COO-CH3 (as well as water). The simplest ester is methyl formate (H-COO-CH3, also called methyl methanoate).

For esters derived from the simplest carboxylic acids, the traditional names are recommended by the International Union of Pure and Applied Chemistry (IUPAC),[2]. Examples of names (from lower molecular-weight acids) are: formate (from formic acid), acetate (acetic acid), propionate (from propionic acid), butyrate (butyric acid), and so forth. For esters from higher molecular-weight acids, the alkane name with an -oate ending is generally preferred—for example, hexanoate from hexanoic acid. Common esters of aromatic acids include benzoates such as methyl benzoate, and phthalates, with substitution allowed in the name.

Their lack of hydrogen-bond-donating ability means that ester molecules cannot hydrogen-bond to each other, which makes esters generally more volatile than a carboxylic acid of similar molecular weight. This property makes them very useful in organic analytical chemistry: unknown organic acids with low volatility can often be esterified into a volatile ester, which can then be analyzed using gas chromatography, gas liquid chromatography, or mass spectrometry.

Examples of esters with distinctive odors and flavors are given below.

Esters can be prepared in the laboratory in several ways:

Esters react in a number of ways: