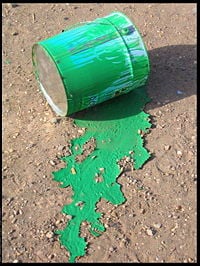 Paint is the general term for a family of products used to protect and add color to an object or surface by covering it with a pigmented coating. Paint can be applied to almost any kind of object. It is used for aesthetic purposes, such as in producing works of art or manuscript illumination, and for practical purposes, such as in coating and protecting buildings, vehicles, and industrial machinery. Paint is also used to make signs for advertising and directing traffic. It should be noted that some paints and the materials used to make them are toxic and may cause sickness and death. Even nontoxic paints, if not disposed of properly, can pollute the land or water. Therefore, care needs to be exerted when using and disposing of paints. 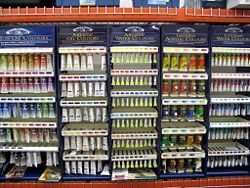 Both professional and amateur artists can take advantage of the wide variety of artists' paints available.

A paint generally has three types of components: a binder, a diluent, and additives. Of these, only the binder is absolutely required. It is the part that eventually solidifies to form the dried paint film. Typical binders include synthetic or natural resins, such as acrylics, polyurethanes, polyesters, melamines, oils, and latex.

The diluent serves to adjust the viscosity of the paint. It is volatile and does not become part of the paint film. Typical diluents include organic solvents such as alcohols, ketones, and esters. Water is also a common diluent. Sometimes volatile synthetic resins also serve as diluents.

After application, the paint solidifies and becomes tack-free. Depending on the type of binder, this hardening may be a result of curing (polymer formation), evaporation, or cooling. The curing process usually involves cross-linking of the molecules of the binder, usually in the presence of a catalyst. Cured-film paints can be either solvent-borne or waterborne.

Some waterborne paints are emulsions of solid binders in water, and they are often referred to simply as "emulsions". When the diluent evaporates, the molecules of the binder coalesce and form polymers, leaving a solid film. Such emulsion paints are also known as latex paints. The polymer itself is not soluble in water, and as a result the paint is water resistant after it has dried.

Some paint films are formed by cooling of the binder. For example, wax paints are liquid when warm and harden upon cooling. 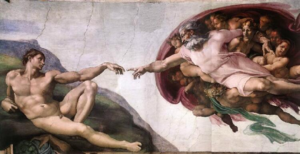 Michelangelo's depiction of the creation of Adam.

Since the time of the Renaissance, siccative (drying) oil paints (containing primarily linseed oil) have been the most commonly used type of paints in the fine arts. In the twentieth century, however, water-based paints—including watercolors and acrylic paints—became very popular, based on the development of latex and acrylic pigment suspensions. Milk paints (also called casein), in which the medium is derived from milk, were popular in the nineteenth century and are still available today. Egg tempera, in which the medium is an emulsion of egg yolk mixed in oil, is still in use as well, as are wax-based paints. Gouache is a form of watercolor paint that was also used in the Middle Ages and Renaissance for manuscript illumination. The pigment was often made from ground semiprecious stones, such as lapis lazuli, and the binder was made from either gum arabic or egg white. Gouache is commercially available today. Poster paint is usually used for artwork by children.

A distinction is usually made between a pigment and a dye. A pigment is a colored substance (or colorant) that is not soluble in the vehicle (medium or matrix) to which it is added, while a dye is a colored substance that is either a liquid or is soluble in the medium used. In addition, a dye has an affinity for the substrate to which it is applied, while a pigment has no affinity for the substrate. Pigments and dyes can be organic or inorganic, obtained from natural products or prepared by chemical synthesis.

At times, a given colorant can be called a pigment or a dye, depending on the vehicle in which it is used. In some cases, a pigment is made by precipitating a soluble dye with a metallic salt. The resulting pigment is called a "lake."

Pigments are used in the coloring of paint, ink, plastic, fabric, and other materials. When added to paint, a pigment not only provides color but also makes the paint opaque, thus protecting the painted object from the harmful effects of ultraviolet light while also hiding defects on the object's surface.

Some pigments are toxic, such as those used in lead paint. For this reason, paint manufacturers have replaced lead white with a less toxic substitute called titanium white (composed mainly of titanium dioxide). This substitute, first used in paints in the nineteenth century, can even be used to color food. The titanium white used in most paints today is often coated with silicon or aluminum oxides for better durability.

Some newer paints, called prism paints, can produce effects where the color appears to change, depending on the angle (orientation) from which it is viewed. These effects can be seen in modern U.S. and Canadian banknotes, specifically the newer, higher denomination notes.

Paint can be applied as a solid, liquid, or gaseous suspension. Application techniques vary, depending on the practical or artistic results desired.

The solid form of paint is a fine powder that is applied to the object's surface and baked at high temperature. The heat melts the powder and causes it to stick to the surface. Solid paint is usually used for industrial and automotive applications.

Paint in the liquid form can be applied directly using brushes, paint rollers, blades, and other instruments. Liquid paint may also be applied using one's fingers, as is popular for artwork by children, or by dipping the object in paint. Roller application generally takes two coats for even color. Edges are often finished with an angled brush. After liquid paint is applied, there is an interval called "open time" during which the paint can be blended with additional painted regions (at the "wet edge").

A gaseous suspension of paint consists of solid particles or liquid droplets that are suspended in a gas (usually air) and sprayed on an object. There are several advantages to using this process:

Care needs to be taken when applying paints, especially if they are toxic.

Painted walls have been discovered at certain sites of ancient civilizations. For instance, ancient walls at Dendera, Egypt, were painted perhaps 2,000 years ago and have remained exposed to the air, but they still possess perfect brilliancy of color. The Egyptians mixed their colors with some gummy substance and applied the colors detached from one another without any blending. It appears that they used six colors: white, black, blue, red, yellow, and green.

Pliny mentions that in the town of Ardea, he observed ceilings that had been painted prior to the foundation of Rome. He expresses great surprise and admiration at their freshness, after the lapse of many centuries.

Retrieved from https://www.newworldencyclopedia.org/p/index.php?title=Paint&oldid=1088060
Categories:
This page was last edited on 18 November 2022, at 06:16.
Content is available under Creative Commons Attribution/Share-Alike License; additional terms may apply. See Terms of Use for details.