3-dimensional structure of hemoglobin. The four subunits are shown in red and yellow, and the heme groups in green.

Hemoglobin or haemoglobin (frequently abbreviated as Hb) is the iron-containing oxygen-transport metalloprotein in the red cells of the blood in mammals and almost all other vertebrates. Some invertebrates also employ hemoglobin in oxygen transport, such as annelid worms, which have the hemoglobin dissolved in the blood, and the larval aquatic stages of a few insects. Only a few vertebrates, such as eel larvae and some species of Antarctic "icefish," have been found to lack hemoglobin. Hemoglobin is the most efficient oxygen-carrier known.

A protein-metal complex, hemoglobin binds loosely and reversibly with oxygen under suitable conditions and then releases the gas under other conditions. In vertebrates, hemoglobin transports oxygen from the lungs or gills to the rest of the body, such as to the muscles, where it releases the oxygen load. Structurally, hemoglobin is a globular protein with an embedded heme (or haem) group; each heme group contains an iron atom, and this is responsible for the binding of oxygen. The most common types of hemoglobin contains four such subunits.

Mutations in the gene for the hemoglobin protein result in a group of hereditary diseases termed hemoglobinopathies, the most common members of which are sickle-cell disease and thalassaemia.

Because carbon monoxide binds preferentially to hemoglobin over oxygen, smoking tobacco can greatly impact oxygen transport, blocking up to 20% of the oxygen active sites on hemoglobin. This is just one of the many serious, health related effects of tobacco smoking, and represents a degrading of the human body. The body is considered by many religious faiths to be a "temple of God," which should be spiritually and physically treated with the utmost sanctity.

Hemoglobin has been used to determine evolutionary relationships. The alpha chains of humans and chimpanzees have identical sequences of amino acids, whereas humans differ by one amino acid (our of 141) from the gorilla, and 25 from rabbits, and 71 from carp. 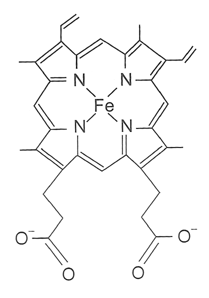 The hemoglobin molecule is an assembly of four globular protein subunits. Each subunit is composed of a protein chain tightly associated with a non-protein heme group.

Each individual protein chain arranges in a set of alpha-helix structural segments connected together in a "myoglobin fold" arrangment, so called because this arrangment is the same folding motif used in myoglobin proteins. This folding pattern contains a pocket that is suitable to strongly bind the heme group.

A heme group consists of an iron atom held in a heterocyclic ring, known as a porphyrin. This iron atom is the site of oxygen binding. The iron atom is bonded equally to all four nitrogens in the center of the ring, which lie in one plane. Two additional bonds perpendicular to the plane on each side can be formed with the iron to create the fifth and sixth positions, one connected strongly to the protein, the other available for binding of oxygen. The iron atom can either be in the Fe+2 or Fe+3 state, but ferrihaemoglobin (Methaemoglobin) (Fe3+) cannot bind oxygen.

In adult humans, the most common haemoglobin type is a tetramer (which contains 4 subunit proteins) called hemoglobin A, consisting of two α and two β subunits non-covalently bound. This is denoted as α2β2. The subunits are structurally similar and about the same size. Each subunit has a molecular weight of about 16,000 daltons, for a total molecular weight of the tetramer of about 64,000 daltons. Haemoglobin A is the most intensively studied of the haemoglobin molecules.

The four polypeptide chains are bound to each other by salt bridges, hydrogen bonds, and hydrophobic interaction. There are two kinds of contacts between the α and β chains: α1β1 and α1β2.

Types of hemoglobins in humans

In the embryo (the first twelve weeks after conception):

Binding with oxygen, carbon monoxide, and other molecules

Steric conformations of hemoglobin in oxy and deoxy forms.

In the tetrameric form of normal adult hemoglobin, the binding of oxygen is a cooperative process. The binding affinity of hemoglobin for oxygen is increased by the oxygen saturation of the molecule. As a consequence, the oxygen binding curve of hemoglobin is sigmoidal, or 'S' shaped, as opposed to the normal hyperbolic (noncooperative) curve. This positive cooperative binding is achieved through steric conformational changes of the hemoglobin protein complex: when one subunit protein in hemoglobin becomes oxygenated it induces a confirmation or structural arrangement change in the whole complex, causing the other 3 subunits to gain an increased affinity for oxygen.

Carbon dioxide (CO2) occupies a different binding site on the hemoglobin. Carbon dioxide reacts with water to give bicarbonate and carbonic acid freed protons (H+) via the reaction, which is catalyzed by carbonic anhydrase: 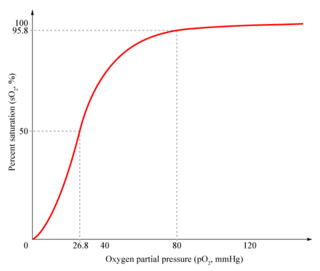 Hemoglobin also has competitive binding affinity for sulfur monoxide (SO), nitrogen dioxide (NO2), and hydrogen sulfide (H2S). The iron atom in the heme group must be in the Fe+2 oxidation state to support oxygen transport. Oxidation to Fe+3 state converts hemoglobin into hemiglobin or methemoglobin, which cannot bind oxygen. Nitrogen dioxide and nitrous oxide are capable of converting hemoglobin to methemoglobin.

In people acclimated to high altitudes, the concentration of 2,3-diphosphoglycerate (2,3-DPG) in the blood is increased, which allows these individuals to deliver a larger amount of oxygen to tissues under conditions of lower oxygen tension. This phenomenon, where molecule Y affects the binding of molecule X to a transport molecule Z, is called a heterotropic allosteric effect.

A variant hemoglobin, called fetal hemoglobin (Hb F, α2γ2), is found in the developing fetus, and binds oxygen with greater affinity than adult hemoglobin. This means that a higher percentage of hemoglobin has oxygen bound to it at lower oxygen concentration, in comparison to that of adult hemoglobin. As a result, fetal blood in the placenta is able to take oxygen from maternal blood.

Synthesis and degradation of hemoglobin

Hemoglobin synthesis involves the coordinated production of heme, which is responsible for the reversible binding of oxygen, and globin, which is the protein that envelops the heme molecule and protects it. Heme is synthesized in the mitochondrion and the cytosol of the red blood cell when the nucleus (and DNA for synthesis) still exists. Iron deficiency impairs heme synthesis, thereby producing anemia. It is the most common cause of anemia. Inhibited heme synthesis, causing anemia, can also be caused by various drugs and toxins, as well as lead.

When red cells reach the end of their life due to aging or defects, they are broken down, and the hemoglobin molecule is broken up and the iron recycled. When the porphyrin ring is degraded, the fragments are normally secreted in the bile by the liver. The major final product of heme degradation is bilirubin, a yellow waste product. Increased levels of this chemical are detected in the blood if red cells are being destroyed more rapidly than usual. Improperly degraded hemoglobin protein or hemoglobin that has been released from the blood cells can clog small blood vessels, especially the delicate blood filtering vessels of the kidneys, causing kidney damage. Iron is stored in the liver or recycled into new hemoglobin.

Many species of leguminous plants, and some nonleguminous plants, are capable of taking atmospheric nitrogen from the air and converting it to nitrate for food for the plant. This process, called nitrogen fixation, occurs when special kinds of bacteria, often species of the genus Rhizobium, infect the roots of the plant and produce nodules there. Remarkably, these nitrogen-fixing nodules contain quantities of hemoglobin. Hemoglobin is otherwise unknown in the plant kingdom. The hemoglobin appears to enhance nitrogen fixation indirectly, by controlling the partial pressure of oxygen in the nodule.

Role in disease and diagnosis

Mutations in the globin chain are associated with haemoglobinopathies, such as sickle-cell anemia and thalassemia. Sickle-cell anemia is a recessive genetic disease which causes a single amino-acid defect (a valine molecule replaces a molecule of glutamic acid) in one of the the protein chains of hemoglobin. This defect causes the red blood cells to become deformed when oxygen is scarce (as when the individual is exercising strenuously) and they combine with each other, forming blockages to blood flow at just the time when the body needs oxygen the most. As a result, people with sickle-cell anemia tend to have intermittent illness and have shorter than normal life spans.

There is a group of genetic disorders, known as the porphyrias, that are characterized by errors in metabolic pathways of heme synthesis. King George III of the United Kingdom was probably the most famous porphyria sufferer.

To a small extent, hemoglobin A slowly combines with glucose at a certain location in the molecule. The resulting molecule is often referred to as Hb A1c. As the concentration of glucose in the blood increases, the percentage of Hb A that turns into Hb A1c increases. In diabetics whose glucose usually runs high, the percent Hb A1c also runs high. Because of the slow rate of Hb A combination with glucose, the Hb A1c percentage is representative of glucose level in the blood averaged over a longer time (typically 3 months).

Hemoglobin is by no means unique; there are a variety of oxygen transport and binding proteins throughout the animal (and plant) kingdom. Other organisms, including bacteria, protozoans and fungi, all have hemoglobin-like proteins whose known and predicted roles include the reversible binding of gaseous ligands.

Myoglobin: It is found in the muscle tissue of many vertebrates including humans, and especially common in diving mammals such as whales and seals (gives muscle tissue a distinct red or dark gray color). Myoglobin is very similar to hemoglobin in structure and sequence, but it is not arranged in tetramers, it is a monomer and lacks cooperative binding, and is used to store oxygen rather than transport it.

Hemocyanin: It is the second most common oxygen transporting protein found in nature. Hemocyanin is found in the blood of many arthropods and molluscs. Hemocyanis uses copper prosthetic groups instead of iron heme groups, and it is blue in color when oxygenated.

Hemerythrin: Some marine invertebrates and a few species of annelid use this iron containing non-heme protein to carry oxygen in their blood. It appears pink/violet when oxygenated, clear when not.

Vanabins: Also known as Vanadium Chromagen, it is found in the blood of Sea squirts and are hypothesized to use the rare metal Vanadium as its oxygen binding prosthetic group; however, this hypothesis is unconfirmed.

Erythrocruorin: It is found in many annelids, including earthworms. A giant free-floating blood protein, it contains many dozens, even hundreds, of iron heme containing protein subunits bound together into a single protein complex, with a molecular masses greater than 3.5 million daltons.

Pinnaglobin: It is only seen in the mollusk Pinna squamosa. It is a brown manganese-based porphyrin protein.

Leghemoglobin: This is found in leguminous plants, such as alfalfa or soybeans. The nitrogen fixing bacteria in the roots are protected from oxygen by this iron heme containing oxygen binding protein.