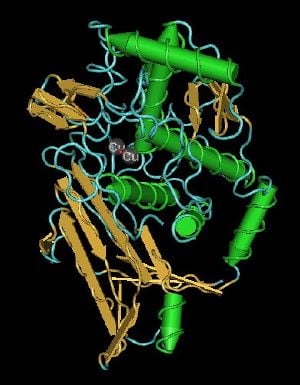 Single Oxygenated Functional Unit from the hemocyanin of an octopus.

Hemocyanin, or haemocyanin, is any of a group of copper-containing respiratory proteins that serve an oxygen-carrying function in the blood of some arthropods and most mollusks, similar to the role of hemoglobin found in the blood of vertebrates. Subunits of the hemocyanin chain contain two copper atoms that reversibly bind a single oxygen molecule (O2). Oxygenation causes a color change between the colorless Cu(I) deoxygenated form and the blue Cu(II) oxygenated form.

Hemocyanins are second only to hemoglobin in biological popularity of use in oxygen transport. Most mollusks, such as bivalves and cephalopods use hemocyanins, although some gastropods use hemoglobin. Among the arthropods known to use hemocyanin are crayfish, lobsters, crabs, horseshoe crabs, and some centipedes and millipedes. It is very rare, but not unknown, in insects (Hagner-HOller et al. 2004).

Hemocyanin offers another mechanism for organisms to get the necessary oxygen to their cells. For certain organisms, such as crustaceans living in cold environments with low oxygen pressure, the large, free-floating hemocyanin offers certain advantages over the small, cell-contained hemoglobin, whereas it is less effective as a transport mechanism for other organisms, such as vertebrates.

Hemocyanin is common for oxygen transport in mollusks. Only some arthropods use hemocyanin for oxygen transport in the hemolymph (blood). Among these arthropods are members of the taxa Crustacea, Myriapoda, Chelicerata, and Onychophora (Hagner-Holler et al. 2004). As arthropods with a tracheal system, insects generally do not use respiratory proteins to transport oxygen (Nigam et al. 1997). The tracheal system allows gas exchange through tubular structures that connect the air directly with the inner organs, allowing diffusion of oxygen to the tissues (Hagner-Holler et al. 2004). Some insects, mainly species that live in a temporarily hypoxic environment, such as some aquatic Hemiptera and aquatic larvae of the chironomid midges, have been found to have hemoglobins (Hagner-Holler et al. 2004). Also, Hagner-Holler et al. (2004) identified an insect (the nymphs and adults of the stonefly, Perla marginata) that has hexameric hemocyanin in the hemolymph. Although centipedes (Chilopoda) and millipedes (Diplopoda) also have tracheal systems, some representatives have been found to utilize hemocyanin for oxygen transport (Kusche and Burmester 2001).

Hemocyanins use copper-binding sites to bind and transport oxygen. Hemocyanins typically have high molecular weights and are made of several individual subunit proteins, with each subunit containing two copper atoms and able to bind one oxygen molecule (O2). The two copper-binding sites in hemocyanin are designated Cu-A and Cu-B. The subunits tend to aggregate. Oxygen affinity is affected by pH, temperature, and ionic concentration (Nigam et al. 1997).

The structure of arthropod hemocyanin tends to be quite different from that of mollusks (Nigam et al. 1997).

In arthropods, hemocyanin is composed of six subunits, or multiples of six subunits (Nigam et al. 1997). Such is the case, for example, in crayfish, lobsters, and crabs, where the structures are hexameric or dodecameric (protein complex with 12 protein subunits) (Nigam et al. 1997). Each subunit weighs about 75,000 daltons (75 kDa) and has two copper atoms. The subunits each have about three domains with oxygen bound in the second domain (Nigam et al. 1997). Each subunit of two copper atoms binds one molecule of O2, coordinated by six histidines of the polypeptide chain (Kusche and Burmester 2001; Hagner-Holler et al. 2004). Polypeptide chains of 653 amino acids (Kusche and Burmester 2001) and 659 and 655 amino acids (Hagner-Holler et al. 2004) are among the various sizes reported for the individual subunits in arthropods. 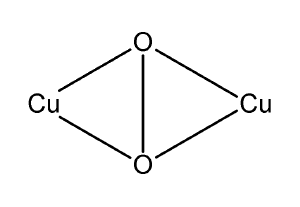 Feature one rules out a mononuclear peroxo complex. Feature two does not match with the UV-Vis spectra of mononuclear peroxo and Kenneth Karlin's trans-peroxo models (Karlin et al. 1987). Feature four shows a considerably weaker O-O bond compared with Karlin's trans-peroxo model (Karlin et al. 1987). On the other hand, Nobumasa Kitajima's model shows ν(O-O) of 741 cm-1 and UV-Vis absorbencies at 349 and 551 nm, which agree with the experimental observations for oxyHc (Kitajima et al. 1992). The weak O-O bond of oxyhemocyanin is because of metal-ligand backdonation into the σ* orbitals. The donation of electrons into the O-O antibonding orbitals weakens the O-O bond, giving a lower than expected infrared stretching frequency.

Most hemocyanins bind with oxygen non-cooperatively and are roughly one-fourth as efficient as hemoglobin at transporting oxygen per amount of blood. Hemoglobin binds oxygen cooperatively due to steric conformation changes in the protein complex, which increases hemoglobin's affinity for oxygen when partially oxygenated. In some hemocyanins of horseshoe crabs and some other species of arthropods, cooperative binding is observed, with Hill coefficients between 1.6 and 3. Hill constants vary depending on species and laboratory measurement settings. Hemoglobin, for comparison, has a Hill coefficient of usually 2.8 to 3. In these cases of cooperative binding, hemocyanin was arranged in protein sub-complexes of 6 subunits (hexamer) each with one oxygen binding site; binding of oxygen on one unit in the complex would increase the affinity of the neighboring units. Each hexamer complex was arranged together to form a larger complex of dozens of hexamers. In one study, cooperative binding was found to be dependent on hexamers being arranged together in the larger complex, suggesting cooperative binding between hexamers.

Because of the large size of hemocyanin, it is usually found free-floating in the blood, unlike hemoglobin, which must be contained in cells because its small size would lead it to clog and damage blood-filtering organs such as the kidneys. This free-floating nature can allow for increased hemocyanin density over hemoglobin and increased oxygen carrying capacity. On the other hand, free-floating hemocyanin can increase viscosity and increase the energy expenditure needed to pump blood.

While hemocyanins generally are less efficient in oxygen-carrying capacity than hemoglobin, it is effective for the less active crustaceans that live in aquatic environments (Nigam et al. 1997).

The hemocyanin found in Concholepas concholepas blood has immunotherapeutic effects against bladder and prostate cancer. In a research conducted in 2006, mice were primed with C. concholepas before implantation of bladder tumor (MBT-2) cells. Mice treated with C. concholepas showed a significant antitumor effect. The effects included prolonged survival, decreased tumor growth and incidence, and lack of toxic effects (Atala 2006).