Crayfish, or crawfish, is the common name for almost exclusively freshwater crustaceans comprising the arthropod families Astacidae, Cambaridae, and Parastacidae, resembling small versions of the marine lobsters, to which they are closely related in the same decapod infraorder Astacidea. Similar to lobsters, they are characterized by a sharp snout, stalked eyes, a fused head and thorax (cephalothorax), a pair of large pincers on the front legs, and a body made up of 19 segments. Typically green, dark brown, or sandy color and about 3 to 6 inches (7.5 to 15 centimeters) in length, they also are known as crawdads or crodgers.

Crayfish are important in terrestrial and freshwater food chains, consuming small fish, earthworms, snails, tadpoles, and plants, and being consumed by fish (such as bass), salamanders (mudpuppies), birds (owls, herons, and so on), snakes, mink, raccoons, and many other animals. They also are a popular food for people in various regions of the world.

In Australia and New Zealand, the name crayfish (or cray) generally refers to a saltwater spiny lobster, of the type Jasus that is indigenous to much of southern Oceania, while the freshwater crayfish are usually considered a yabby, or a koura, from the Aboriginal, and Māori, names for the animal respectively.

The study of crayfish is called astacology.

The body of a decapod crustacean, such as a crab, lobster, or prawn, is made up of nineteen body segments grouped into two main body parts, the cephalothorax, and the abdomen. Each segment may possess one pair of appendages, although in various groups these may be reduced or missing. The cephalothorax is covered by a carapace, which protects the internal organs and the gills; the section of the carapace that projects in front of the eyes is called the rostrum.

Crayfish have a tough exoskeleton, which protects them, but they must molt in order to grow, leaving them vulnerable during this time. The crayfish regularly gets too big for its skeleton, sheds it, and grows a new larger one. Such molting occurs six to ten times during the first year of rapid growth, but less often during the second year. For a few days following each molt, crayfish have soft exoskeletons and are more vulnerable to predators. 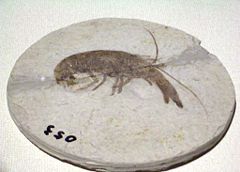 Crayfish have two pairs of sensory antennae on the head, and the eyes are on movable stalks. On the thorax or pereon, there are four pairs of walking legs (pereiopods) and one pair of pereiopods (chelipes) armed with a claw (pinchers). On the abdomen, or pleon, there are pleopods (also called swimmerets), which are primarily swimming legs. At the end of the pleon is the tail fan, comprising a pair of biramous uropods and the telson, which bears the anus. Together, they are used for steering while swimming, and in the caridoid escape reaction. When they are in danger and need to flee, crayfish can swim backwards quickly by curling and uncurling their abdomen. They breathe through feather-like gills.

The name "crayfish" comes from the Old French word escrevisse (Modern French écrevisse) from Old Frankish krebitja (cf. crab), from the same root as crawl. The word has been modified to "crayfish," perhaps do to the pronunciation of the last part of the Old French escrevisse, taken into English as crevise. The largely American variant "crawfish" is similarly derived.

Some kinds of crayfish are known locally as lobsters, crawdads (Johnson 2008), mudbugs (Johnson 2008), and yabbies. In the Eastern United States, "crayfish" is more common in the north, while "crawdad" is heard more in central and western regions, and "crawfish" further south, although there are considerable overlaps. In France, they are called écrevisses and in Australia yabbys or yabbies (Herbst 2001). 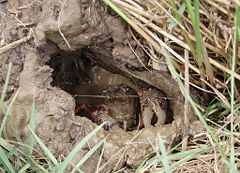 A crayfish (Procambarus clarkii) is digging its burrow near a pond.

There are three families of crayfish, two in the northern hemisphere and one in the southern hemisphere. The southern-hemisphere (Gondwana-distributed) family Parastacidae is found in South America, Madagascar, and Australasia, and is distinguished by the lack of the first pair of pleopods (Hobbs 1974). Of the other two families, members of the Astacidae live in western Eurasia and western North America, and members of the family Cambaridae live in eastern Asia and eastern North America. The Astracidae in North America mostly are found west of the Rocky Mountains in the northwestern United States and British Columbia in Canada, while the Cambaridae are found in the eastern United States south through Mexico (Crandall and Fetzner 1995). Crayfish are found in all continents except Africa. 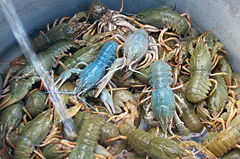 There are two centers of crayfish diversity, one in the southeastern North America, where eighty percent of cambarid species are found, and one in Victoria, Australia, where a larger proportion of the parastacid species are found (Crandall and Fetzner 1995). The greatest diversity of crayfish species is found in Southeastern United States, with over 330 species in nine genera, all in the family Cambaridae. In Australasia, there are over 100 species in a dozen genera. Many of the better-known Australian crayfish are of the genus Cherax, and include the marron (Cherax tenuimanus), red-claw crayfish (Cherax quadricarinatus), yabby (Cherax destructor), and western yabby (Cherax preissii). The world's largest crayfish, Astacopsis gouldi, which can achieve a mass in excess of 3 kilograms, is found in the rivers of northern Tasmania.

Madagascar has a single (endemic) crayfish species, Astacopsis madagascarensis. Europe is home to seven species of crayfish in the genera Astacus and Austropotamobius. A further genus of astacid crayfish is found in the Pacific Northwest and the headwaters of some rivers east of the Continental Divide. Cambaroides is native to Japan and eastern mainland Asia.

Crayfish are found in bodies of water that do not freeze to the bottom; they are also mostly found in brooks and streams where there is fresh water running, and which have shelter against predators. Most crayfish cannot tolerate polluted water, although some species, such as the invasive Procambarus clarkii, are more hardy. Some crayfish have been found living as much as 3 meters (10 feet) underground. A few survive in saltwater (CC 2008). Louisiana crawfish are usually boiled live in a large pot with heavy seasoning (salt, cayenne pepper, lemon, garlic, bay leaves, and so on) and other items such as potatoes, maize, onions, garlic, and sausage. They are generally served at a gathering known as a crawfish boil. Other popular dishes in the Cajun and Creole cuisines of Louisiana include crawfish étouffée, crawfish pie, crawfish dressing, crawfish bread, and crawfish beignets (Taggart 2005), and crayfish are an ingredient in Chicken Marengo. 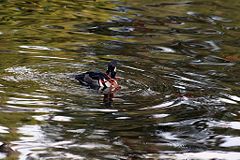 Crayfish is a popular dish in Scandinavia, and is by tradition primarily consumed during the fishing season in August. The boil is typically flavored with salt, sugar, ale, and large quantities of the flowers of the dill plant. The catch of domestic freshwater crayfish, Astacus astacus, and even of a transplanted American species, Pacifastacus leniusculus, is very limited and to satisfy demand the majority of what is consumed has to be imported. Sales depended on imports from Turkey for several decades, but after a decline in supply, China and the United States are today the biggest sources of import.

The Mexican crayfish is named locally as acocil and was a very important nutrition source of the ancient Mexican Aztec culture; now this kind of crayfish is consumed (mainly boiled) and prepared with typically Mexican sauces or condiments in central and southern Mexico.

In China, the culinary popularity of crayfish swept across Mainland China in the late 1990s. Crayfish is generally served with Mala flavor (a combined flavor of Sichuan pepper and hot chili) or otherwise plainly steamed whole, to be eaten with a preferred sauce. In Beijing, the Ma La flavoured crayfish (麻辣小龙虾) is shortened to "Ma Xiao" (麻小) and is often enjoyed with beer in a hot mid-summer evening.

Like other edible crustaceans, only a small portion of the body of a crayfish is edible. In most prepared dishes, such as soups, bisques, and étouffées, only the tail portion is served. At crawfish boils or other meals where the entire body of the crayfish is presented, however, other portions may be eaten. Claws of larger boiled specimens are often pulled apart to access the meat inside. Another favorite is to suck the head of the crayfish, as seasoning and flavor can collect in the fat of the boiled interior.

Other uses of crayfish 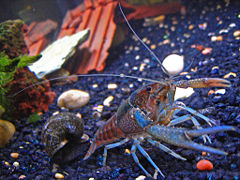 A crayfish in a freshwater aquarium.

Crayfish are kept as pets in freshwateraquariums. They prefer foods like shrimp pellets or various vegetables, but will also eat tropical fish food, regular fish food, algae wafers, and even small fish that can be captured by their claws, such as goldfish or minnows. Their disposition towards eating almost anything will also cause them to consume most aquarium plants in a fish tank; however, crayfish are fairly shy and may attempt to hide under leaves or rocks. When keeping a crayfish as a pet, one must provide a hiding space. At night, some fish become less energetic and settle to the bottom. The crayfish might see this as a chance for an easy meal, or a threat, and injure or kill the fish with its claws. Crayfish are effective scavengers and will consume fish carcasses. Crayfish are great escape artists and will try to climb out of the tank, so any holes in the hood should be covered.

In some nations, such as England, United States, Australia, and New Zealand, imported crayfish are a danger to local rivers as introduced species. The three species commonly imported to Europe from the Americas are Orconectes limosus, Pacifastacus leniusculus, and Procambarus clarkii (Lee 1998). Furthermore, crayfish may spread within a nation into different bodies of water because specimens captured for pets in one river are often flung back into a different one. There is a potential for ecological damage when crayfish are introduced into nonnative bodies of water.

Crayfish are commonly sold and used as bait, either live or with only the tail meat, and are good at attracting channel catfish, largemouth bass, pike, and muskie. However, live crayfish should have the claws removed or they may keep fish from biting the hook. Crayfish also easily fall off of the hook, so casting should be slow. 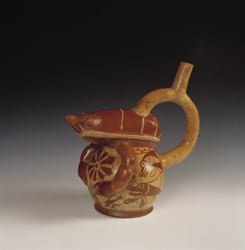 Some crayfish suffer from a disease called crayfish plague. This is caused by the water mold Aphanomyces astaci. Species of the genus Astacus are particularly susceptible to infection, allowing the more resistant signal crayfish to invade parts of Europe. Crayfish plague is not indigenous to Europe, rather it was introduced by the incorporation of new species of crayfish from the Americas (Lee 1998).

The Moche people of ancient Peru worshiped animals and often depicted crayfish in their art.